Have a Hunk Remind You to Feel Yourself Up - Ms. Magazine
Skip to content 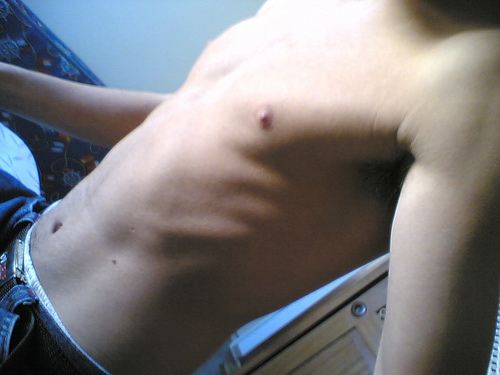 October is National Breast Cancer Awareness Month, and that usually manifests in the bombardment of sexist and demeaning awareness campaigns like “Save the Ta-tas.” Don’t even get me started on the useless and idiotic Facebook memes. But there’s one surprising and, er, “exciting” new breast cancer awareness campaign this season. Rethink Breast Cancer, a Canadian organization that calls itself the “young women’s breast cancer movement,” released the Your Man Reminder app where sexy, half-naked men remind you to do breast self-exams. And to announce the app? A video. With stripping.

As far as the breast cancer message goes, I am glad to finally see a campaign that actually has an educational message. The TLC method (touch, look, check with your doctor) is an easy and simple way to approach self-breast exams, something we should all be in the habit of doing. The video also uses the word “breast” (instead of booby or “ta-ta”) and never once discusses women, breasts or breast cancer in a way that is disrespectful or patronizing. It’s sexy, but it doesn’t objectify women.

Of course, some may ask, is it OK that the video objectifies men?

Women know all too well the consequences of objectification. In our new world of female sexual empowerment, men are beginning to learn them, too. As men feel the pressure to conform to the standard of masculine beauty (six-pack abs, smooth skin, rippling muscles) increasingly found in the media, they are falling prey to eating disorders, spending their hard-earned money on hair removal and personal grooming products and most likely experiencing low self-esteem if they don’t measure up to the assumed female fantasy. Even if they do measure up, they must deal with the feelings of low self-worth that come from being treated as nothing more than a “piece of meat.”

I strongly believe that feminism is about fighting sexism regardless of which gender it targets. This video (I haven’t downloaded the app) uses an age-old “sex sells” philosophy and is in some ways reminiscent of traditional sexist advertising. But despite the shameless objectification at play, I don’t feel incensed or outraged by its use in this case. In fact, I really dig this video. It reminds me a lot of the recent Old Spice ad campaign, which owed its success in part to the number of people who enjoyed ogling the shirtless Isaiah Mustafa. There is a big difference between way that Mustafa and the men in the breast cancer video are objectified and the way that women are traditionally objectified in advertising, like for example, in this recent gem from JCPenny.

When women are objectified in the media, they are often done so in a way where they are silent, passive and submissive. In plenty of ads, women look drugged and posed in sexually submissive positions. This is a very different kind of objectification than the kind we see in this video, where the men are talking, teaching, leading and generally appearing as active, consenting participants in the whole thing. They are essentially objectifying themselves with a wink and a nod, acknowledging that this is all in good fun.

Occasionally, you do see this kind of consensual, participatory objectification with women. I’m thinking of Sofía Vergara’s ad for her new clothing link at Kmart, in particular.

Like Mustafa and the men of Rethink Breast Cancer, she’s an active participant, objectifying herself with a level of playful awareness that lets you know that she’s still in charge. (Not to mention the fact that she brings racial and body diversity to the table, which is excellent.) As a result, this kind of objectification feels okay to enjoy and participate in.

Maybe we should ask for an expansion of the app for lesbians that includes some hot, actively participating women teaching TLC. An app like this could also easily be altered to help remind gay and straight men, who are also at risk for breast cancer, about the importance of doing self-breast exams too.

As a hetero woman clearly in the app’s target audience, I’m considering downloading the Your Man Reminder app (available for the iPhone and Android platforms). It would be helpful to have a regular reminder to do self-breast exams and, if it comes from a consenting hot guy with his shirt off, so much the better. Still, it is always important to be thoughtful about media that objectifies men and women and consider the broader impact of images that promote an unattainable standard of beauty–masculine or feminine–even when we’re using them to do something good.