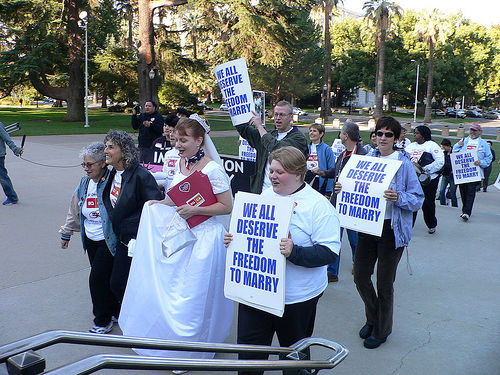 Opponents of marriage equality have grown so accustomed to parroting the same arguments over and over again that they don’t seem to notice the ground shifting under their feet. Such is the point of a brief (PDF) filed at the end of last week by the Gay and Lesbian Advocates and Defenders (GLAD), a New England gay rights organization working to overturn the federal Defense of Marriage Act (DOMA).

GLAD’s brief responds to the five-member Bipartisan Legal Advisory Group of the House of Representatives (BLAG), which is appealing the 2010 District Court ruling on Gill v. Office of Personnel Management (OPM) in which DOMA was declared to be unconstitutional. The BLAG was convened by Speaker of the House John Boehner after the Department of Justice said it would no longer defend DOMA in court, so BLAG has begun making its own defense. Its central arguments have to do with whether lesbians and gay men should be allowed to marry–overlooking the fact that the plaintiffs in Gill v. OPM actually already are (or were—some are widowed) legally married in the state of Massachusetts.

In its brief, GLAD seeks to clear up BLAG’s apparent confusion over the current state of marriage equality in the U.S.:

The central flaw in BLAG’s arguments is a failure to understand what DOMA does. Again and again, BLAG sounds as if it were defending a state’s decision to exclude same-sex couples from marrying. It relies, for example, on Baker v. Nelson, which involved a state’s refusal to marry a same-sex couple, and it makes countless arguments about why letting same-sex couples join in marriage is a bad idea. But that is not the issue [my italics]. The issue is whether Congress was constitutionally justified in refusing to treat already married same-sex couples as married, in any context.

If you know people who, like BLAG, still don’t see that DOMA’s days are numbered, here are five questions (and some follow-ups) you could ask to help bring them up to date:

1. Do you think that people should be discriminated against if they are members of a disfavored minority group? Congress enacted DOMA based upon explicitly stated biases against lesbians and gay men. As GLAD noted in the brief:

The House Report…explained Congress’s motivation for enacting DOMA: ‘Civil laws that permit only heterosexual marriage reflect and honor a collective moral judgment about human sexuality. This judgment entails both moral disapproval of homosexuality, and a moral conviction that heterosexuality better comports with traditional (especially Judeo-Christian) morality.’”

The remarks of Representative Hyde, then-Chairman of the House Judiciary Committee, were blunt but typical: ‘Most people do not approve of homosexual conduct … and they express their disapprobation through the law. … It is … the only way possible to express this disapprobation.’

2. Did you know that the U.S. Department of Justice no longer supports DOMA? In a brief filed in July of this year, the Obama administration made clear that personal animus against lesbians and gay men cannot justify discriminatory laws. (I have written about the DOJ position here.) Furthermore, Obama himself has stated that he supports the repeal of DOMA.

3. Did you know that same-sex marriage has been legal in Massachusetts since 2004 and that Connecticut, Iowa, New Hampshire, New York and Washington, D.C., plus the Coquille and Suquamish Indian tribes, have all legalized marriage for lesbian and gay couples? These governing bodies have rejected the argument that marriage is an institution that favors only opposite-sex couples. So, given the reality on the ground—that same-sex marriage is legal in many parts of the U.S.—should the federal government be able to offer its own definition of marriage that runs counter to legal definitions upheld by states, districts, and tribes?

One final question you might ask defenders of DOMA is what year they think we’re living in. They behave as if it’s 1996: the year DOMA went into effect. Mary Bonauto, Civil Rights Project director for GLAD, describes DOMA’s unsavory beginnings and reminds us why it’s a good thing that U.S. views on same-sex marriage have evolved since then :

When all is said and done, everyone knows what was going on in 1996. Some members of Congress were openly hostile to gay people and same-sex relationships. The official House Report admits DOMA’s purpose was to express ‘moral disapproval of homosexuality.’ Others reacted instinctively against people who seemed different and an issue that seemed unfamiliar. Since there are no policy justifications that make any sense, all that remains is dislike and discomfort. That’s why DOMA fails–dislike and discomfort are not neutral policy reasons for singling out same-sex married couples for blatantly disadvantageous treatment.

Now that Don’t Ask, Don’t Tell has been repealed, DOMA is sure to be next. Our nation simply cannot justify the withholding of federal benefits to lesbian and gay military personnel, many of whom may now freely marry in their home states and districts. Nor can we justify the second-class citizenship accorded to married same-sex couples and their families under DOMA. In order for America to live up to its promise of freedom for all, DOMA must become a thing of the past. The sooner, the better.

Photo from Flickr user basykes under license from Creative Commons 2.0.