Five More Years of Ortega May Be Dangerous for Nicaraguan Women - Ms. Magazine
Skip to content 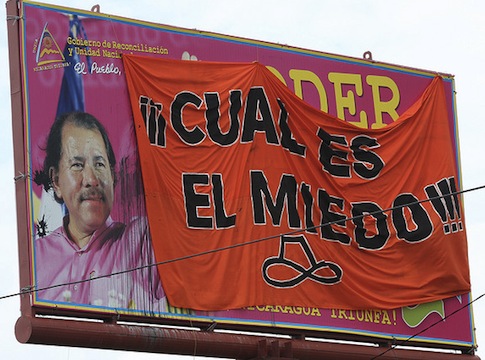 When the Nicaraguan electorate goes to the polls this Sunday in presidential elections, incumbent president Daniel Ortega and the Sandinista Front for National Liberation (FSLN) party are almost guaranteed to win. Ortega has promised five more years of the same if returned to power—a dangerous prospect for Nicaraguan women and girls.

Nicaragua suffers epidemic levels of gender-based and sexual violence, and a 2006 ban on abortion has undermined advances in maternal health, putting thousands of women and girls at risk. Amnesty International (AI) is so concerned that it has targeted Nicaragua for a direct campaign in a wider region where women’s and girls’ rights regularly come head-to-head with entrenched machismo. Esther Major, Central America researcher at AI, says

The government is responding to the size of the problem, which is huge, with … absolute silence. […] The situation in El Salvador, for example, with regard to violence against women, is shocking, but the President and his wife are speaking out and making statements. This government in Nicaragua is refusing to address or even acknowledge the problem.

Nicaragua’s human-rights defenders face an ongoing battle to respond to the needs of so many women and girls. “Programmes that we had … for women and girls’ protection with previous government are no longer implemented,” says Juanita Jiménez Martínez, lawyer for the Autonomous Women’s Movement (MAM), one of the country’s leading feminist organizations.

In the past, the national police worked jointly with [women’s] organizations on gender based violence. But now they’re encouraged to work ‘for the family,’ to preserve the family… This means less protection for women, more authority for men. […] This is a step backwards.

Girls under 17 represent around two-thirds of reported rapes in Nicaragua, and actual incidents are probably much higher, as many girls only report the crime when they fall pregnant by their attacker. Those victims who might have sought an abortion until 2006 now often feel pushed to take devastating measures. “In 2008, the maternal mortality statistics showed high suicide rates,” says Major. “The biggest killer of teenage girls who were pregnant was poison.”

Why is Nicaragua, with a strong feminist movement and some of the most progressive legislation in the region, letting down the female population so badly?

Firstly, there is a powerful, conservative element in the country that lobbied in 2006 for the all-out ban on abortion, gaining exceptional and lasting influence in policy making. Jiménez Martínez also points to allegations in the late 1990s that Ortega had committed years of sexual abuse against his stepdaughter, Zoilamérica Narváez. ‘To talk about sexual abuse in Nicaragua is to talk against Daniel Ortega,” she told me. Members of the women’s movement rallied around Narváez at the time, and since Ortega took the 2006 presidency, women and girls’ rights have dropped off the agenda and women’s organizations have been subjected to arbitrary state scrutiny and smear campaigns in state-owned media.

Five more years of “Ortegismo” may pose a major challenge to women and girls in Nicaragua, but the feminist and human-rights movement will fight to fill in the chasm left by the state in combating violence against women and girls. And a new generation of rights defenders is springing up, such as 24-year-old Fátima Hernández, who has spent the past two years fighting for justice after being raped by a coworker—challenging a culture of impunity that prevails for sexual crime. Last year she set up an organization, The Association of Women for Critical Thinking, to provide legal and psychological support to victims of sexual violence.

Hernández and a tiny team of volunteers, including her family, work out of  a bare office in downtown Managua, scouring the news for stories of victims of gender-based violence to approach and support. They have almost no money, and Hernández has endured threats and abuse for her work, but she is determined that her experience will help others through the trauma of sexual violence. She says,

[I will] always work to defend the rights and dignity of women and girls in my country, particularly those who have been victims of violence and abuse. It’s for this that I want to keep the Association moving forward. I’ve invested so much in establishing it, and I am starting to see now how we can respond to victims.