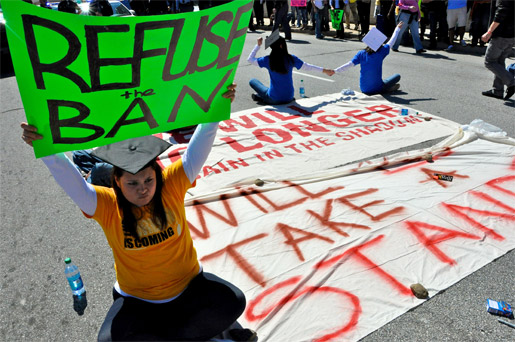 On the opening day of Freedom University, located in a community center in Athens, Ga., students start trickling in 20 minutes before classes begin. The 28 eager collegians—three quarters of them women and the majority Latino/as—have come from Atlanta, Ackworth, Athens and other Georgia communities. Some are recent high-school graduates, others are young mothers who have been out of school for 5 years or more. All are boisterous, hopeful, ready to learn—and undocumented.

Laura Hernández works three jobs but still ventured to class from Atlanta, 60 miles away. “I want to learn; I don’t want to stay ignorant,” she says. “I tried to go to college, and they wouldn’t let me in.”

Hernández can’t enter a public university in Georgia right now because of a ruling last October by the University of Georgia Board of Regents that prohibited those schools from enrolling students without citizenship papers if the schools had rejected any other qualified applicants over the past two years due to lack of space. The fear this ruling stems from is part and parcel of recent anti-immigrant sentiment in the U.S.—that the undocumented will somehow “steal” jobs and services from U.S. citizens. But, in fact, undocumented students comprise less than 0.2 percent of all public university students in Georgia.

In addition, the Georgia state Legislature passed another stringent anti immigrant bill in April, H.B. 87, which will, among other things, require private employers to verify their workers’ status, authorize police to check the status of certain suspects and punish people who harbor the undocumented. The unintended positive consequence of such draconian laws is the emergence of a growing pro-immigrant-rights movement that is primarily led by young women. According to organizer Gina Perez, this new movement draws on the historical success of 1960s freedom struggles in the American South, with some of the tactics mirroring those of the Student Nonviolent Coordinating Committee, which was so instrumental, through voter registration, in toppling white supremacist rule.

Along with Freedom University, the Georgia Undocumented Youth Alliance, Georgia Students for Public Education and Georgia Latino Alliance for Human Rights seek social justice through community outreach and peaceful organizing. In September, the latter hosted a delegation of feminist leaders from around the country who came to hear testimony from local women and girls about the ill effects of H.B. 87 and then broadcast their findings to a national audience.

Back at Freedom University, all academically qualified students—regardless of their immigration status—are offered free, college-level instruction from four volunteer faculty, all women. The course for the semester is American Civilization, focusing on the historical repercussions of immigration laws on daily life, cultural memory and notions of Americanness. Students will be assigned readings, write papers and receive grades. “I think this course is going to be great; I have hope,” says Keish Kim, a 22-year-old undocumented activist who was accepted to an Atlanta university but didn’t qualify for a scholarship due to immigration status and thus couldn’t attend.

“How could you not want all of these young, bright, energetic people to be a part of our world?” asks Atlanta-based civil rights attorney Kung Li, a member of the university’s board.

A Georgia that involves them would be a much better Georgia. Freedom University is the best thing that has come out of the ongoing, creative resistance [to anti-immigrant laws].