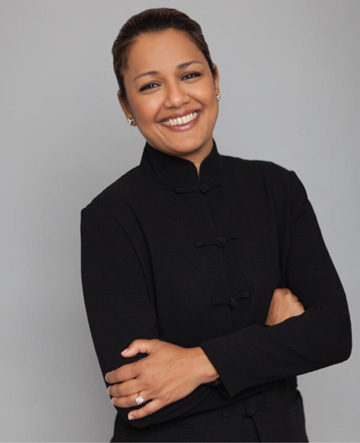 Even though Anika Rahman has lived in the United States more than 20 years, the Bangladeshi native can still be stunned by gender inequities in “the land of the free.” There’s that persistent wage gap, for example, that has U.S. women earning 77 cents to a man’s dollar, with African American women making significantly less and Latinas less still. And then there’s the treatment of U.S. domestic workers, who are explicitly excluded from federal rules written to protect virtually all other wage earners.

But the Ms. Foundation for Women, the philanthropy where Rahman serves as CEO and president, helps to fight such inequality. One recent victory: New York state’s nannies, housekeepers and other domestic workers have now been granted minimal employment guarantees—overtime after 40 hours of work a week, one day off every week, three paid days off a year and protection from harassment. And the force behind the new law—Domestic Workers United, an 11-year-old organization of Caribbean, Latina and African nannies, housekeepers and elderly caregivers—has been funded and ardently supported by the Ms. Foundation.

“Investing long term, building relationships among movements and trusting people on the ground clearly got the job done,” Rahman says. “It’s what we will continue to do at the Ms. Foundation.”

To be clear, the Ms. Foundation is not affiliated with Ms. magazine, though it was started in 1973 with proceeds from Ms. and royalties from Marlo Thomas’ Free to Be… You and Me children’s record and book. Thomas was one of the foundation’s founders, along with three of Ms. magazine’s founding editors, Gloria Steinem, Patricia Carbine and Letty Cottin Pogrebin. It was first thought that the magazine could channel its profits through the foundation to the national women’s movement, but over time it became apparent that Ms. had to focus on sustaining itself, and the foundation had to become independent in its direction and fundraising. Ms. magazine (now published by the Feminist Majority Foundation) and the Ms. Foundation for Women continue to be very supportive of each another, but have long had no formal connection.

Rahman comes to U.S. feminism from a global perspective. Not only is she an immigrant, but she came here to study foreign affairs at Princeton University’s Woodrow Wilson School of Public and International Affairs. She wound up staying in the U.S. and earning a law degree from Columbia University. Since her lifelong goal was to help end extreme inequality, she only served a brief stint in corporate law before becoming founding director of the international program at the Center for Reproductive Rights. A few years later, she was named president of Americans for the United Nations Population Fund (Americans for UNFPA). In both posts, she forged strong relationships with other rights groups and demonstrated the ability to raise fierce amounts of money— including a $37 million bequest while at Americans for UNFPA.

Rahman’s fundraising skills are especially crucial for the Ms. Foundation, which has to gather funds in order to give them away. Its grant-giving mission can sometimes leave people unaware of its impact, however. Rahman says:

We need to strengthen the voice of the Ms. Foundation at the national level in order to more boldly and broadly advance women’s solutions for progressive social change. And I believe that means we have to take a stronger role with our grantees. This means not only giving them grants, but providing capacity-building and institutional support and enhancing their communications so they can speak in their own voice and be more powerful.

Right now the Ms. Foundation is funding 135 organizations working in the arenas of its historic “four pillars of change”: women’s health, ending violence, economic justice and building democracy. The organizations’ work ranges from reproductive and environmental justice to sex education to child sexual abuse to immigration to the women’s press, with grants averaging from $10,000 up to $80,000.

Spurred by the success of Domestic Workers United in New York, the Ms. Foundation is also supporting sister organizations Mujeres Unidas y Activas and the National Domestic Workers Alliance to help spread the word about a proposed Domestic Workers Bill of Rights in California. Even though such a bill is currently stalled in the California state Senate, Rahman believes that the win in New York proves that the Ms. Foundation and its grantees have a winning strategy. Indeed, this past June, the International Labor Organization adopted the first global standards for the world’s 50 to 100 million domestic workers—most of whom are women and girls.

In addition to Domestic Workers United, Rahman proudly points out two other Ms. Foundation-supported groups that achieved significant long-term goals in the past year:

—Family Values @ Work, a network of 15 state coalitions as well as national policy and data experts who strive to get employees paid sick days and family-leave insurance, helped pass the first-ever paid-sick-days legislation in Philadelphia and Seattle.

—Raising Women’s Voices, a national health-care initiative that believes women are the real experts on what should be fixed in our current system (and therefore supports them to raise their voices about it), played a critical role, along with others, in convincing the Department of Health and Human Services to include contraception among preventive health services to be covered by insurance without co-pays or deductibles.

The Ms. Foundation has a long-standing commitment to elevating the voices of those most directly affected by injustice. This is especially important in efforts to end sexual violence, Rahman says. To that end, a new Ms. Foundation grantee is Oregon Abuse Advocates and Survivors in Service (OAASIS), an activist group composed of child-sexual-abuse survivors and family members. Through their speakers’ bureau, statewide conference and survey of survivors and service providers, they are making significant strides in educating the public about such realities of sexual abuse as the fact that over 90 percent of sexual abuse victims know their abuser.

“People with a personal understanding of an issue achieve the most profound change,” says Rahman of the group.

Rahman herself represents profound change. She is the first immigrant and the first Muslim to head the Ms. Foundation for Women. “Being an outlier has tremendous privileges and responsibilities,” she says.

The responsibility is that I feel like my success and failure are never just my success and failure. I always represent people who look like me—who are Muslim, who are darkskinned. And that can be a burden at times because the part of America that has really been imbued in me is individualism. I just want to be judged for who I am.

“But there is an upside,” she continues.

For instance, I always take the opportunity to say that I am Muslim. I say it because, after 9/11, I think people stereotype Muslims, maybe especially Muslim women. People ask where my headscarf is. I say I don’t wear one. I come from a secular family and live a secular life. Still, I do sometimes wish we could live in a world where we could just close our eyes and not see what people look like, their skin color, nothing. You could just hear their voices and the power of their ideas.

In the environmental movement, for instance, the top five organizations have budgets of more than $80 million. Civil rights organizations are big. Civil liberties organizations, too. The only women’s organization that operates on this scale is Planned Parenthood.

Today’s challenges, Rahman believes, are bigger than any one interest group. Reproductive rights, for instance, is a women’s issue, a health issue and often an economic issue. “So we need to do a better job of building bridges with other progressive groups,” she says, “and show them what might seem obvious to us: Women are everywhere. Everything is our concern.”

Comments on this piece? We want to hear them! Send your thoughts to letterstotheeditor@msmagazine.com. To have your letter considered for publication, please include your city and state.

Amanda Robb is a writer based in New York. She has been a contributing writer for O magazine and her work has also appeared in such publications as The New York Times, New York magazine, Newsweek, More and Marie Claire. Her last article for Ms., “Not a Lone Wolf” (Spring 2010), won top honors from the Western Publishing Association, Planned Parenthood and the National Women's Law Center.

What Paycheck Fairness Means to Muslim Women Like Me