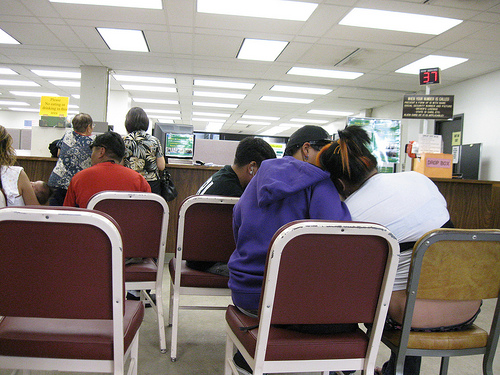 Nearly 2 million Americans will see their unemployment benefits expire in January if Congress doesn’t act to renew them. Some 430,000 of these workers lost their jobs as recently as July.

An extension of benefits is a basic necessity for a country in the midst of a crisis of long-term unemployment: Rates have not been this high for this long since 1948. Secretary of Labor Hilda Solis warned last week that the unemployment rate of 8.6 percent will rise by 2 percentage points if Congress fails to extend unemployment benefits and payroll tax cuts, also set to expire in January.

All Americans will benefit from a UI extension, not just those who are currently collecting UI. Unemployment benefits are among the most efficient form of economic stimulus in existence. Benefits stimulate the economy quickly because recipients spend the money right away on necessities like gas, food, and shelter.

Extending unemployment benefits is critical, but there’s much more that could be done to improve the UI system. President Obama’s jobs bill, which was rejected by Congress, set aside billions of dollars not only to extend UI benefits but also to modernize the system.

For example, the jobs bill would have enabled workers to retrain while continuing to collect benefits. This is critical for workers in sectors of the economy that are undergoing long term, or potentially permanent, contractions–such as the heavily female-dominated field of administrative and secretarial work.

Angela Richards is a 44-year-old African American administrative assistant from Tennessee with 18 years of experience in her field. She was laid off in June, after about a year and a half on the job.

After several weeks of unemployment, she landed an 11-month temporary assignment as an administrative assistant. Despite her years of experience, she has so far been unable to land a permanent job in the non-profit sector, like the one she had before. Like many Americans, she’s struggling to regain her professional footing even after finding work.

Angela would have liked to take advantage of her time out of work to retrain and improve her job prospects, but she couldn’t afford to do so. I asked her whether she would be interested in retraining if she could learn a new skill while continuing to collect UI benefits.

“Absolutely,” she said. Angela said she’d like to study accounting. “It seems like people always need an accountant.”

Indeed, the Department of Labor forecasts that accounting will be among the top ten fastest-growing occupations through 2018.

Congress is currently fighting over whether, and for how long, to extend the benefits, but aides to both parties predict that some kind of deal will be struck. As important as the extension will be to hundreds of thousands of Americans and the economy at large, it is still only a stopgap measure. Joblessness is the political issue of our era, and Congress’s narrow focus indicates a lack of vision. In addition to a UI benefits extension, we need major investments in retraining to prepare workers not only for more jobs, but for better ones.

Read more from Lindsay Beyerstein on the race and gender impact of job creation strategies in the current issue of Ms–available on newsstands, or direct to your door if you join the Ms. community.

ABOVE: Waiting area at an unemployment office. Photo from Flickr user Bytemarks under Creative Commons 2.0.