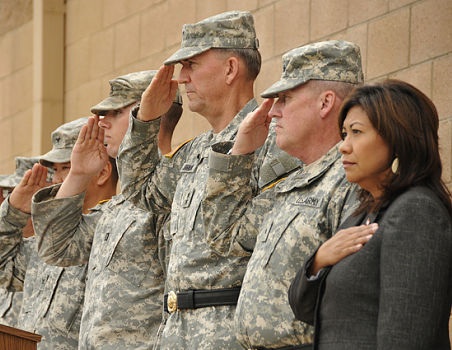 Buried in Women’s History Month is a single day, March 9, marked by a single state, California, to celebrate Latina history. As a Latina from California myself, I confess that, until this year, I had no idea that my home state had set this day aside. But now that I know, I plan to urge everyone to treat it as a major national holiday.

California inaugurated Latina History Day in 1999 with House Resolution 13. The resolution begins by honoring Maria Feliciana Arballo y Gutierrez, “who came to California with the De Anza expedition in 1775 as a widow with her two young daughters [and] was the first woman pioneer of the southwest who was not a Native American.” The resolution continues to recognize the larger contributions of “Latina pioneers” past and present, who “were [and continue to be] forced to endure all the hardships of life.”

Here’s what’s interesting about this resolution: during her historical time period Arballo y Gutierrez would have been considered a “Spaniard” or, if she had some indigenous blood, a “mestizo” — not a “Latina.” When we use the term Latina today it is with the purpose of creating an identity group, most often of those who migrated to the U.S. from the Americas (Mexico southward) and who speak Spanish–another colonial legacy left behind by the Spanish empire. The U.S. Census bureau defines Hispanics or Latinos as persons of “Mexican, Puerto Rican, Cuban, Central or South American, or some other Hispanic origin … [who] may be of any race.”

While historians would say that labeling Arballo y Gutierrez a Latina is anachronistic, I see the utility of doing so. The gesture suggests that women who came to California from Chile, Peru and Mexico during the 19th-century gold rush share something with the Spanish Mexican daughters and wives of the original land grant recipients in California and with the Central Americans who migrated to Los Angeles in the 1980s because of the dirty wars in places like Guatemala and El Salvador.

Treating the descendants of these women as a people helps us push for visibility for all of these histories. It also helps us push for political representation for a demographic that is rapidly expanding. The Latino population increased by 15.2 million between 2000 and 2010, accounting for over half of the 27.3 million increase in the total population of the United States. In that time, the Latino population grew by 43 percent, four times the general population growth.

On February 25th 2012, I had the distinct pleasure of hearing Assemblywoman Norma Torres (D-Ontario-Pomona) speak at the University of Texas at Austin. Her story and why she ran for office have much to teach us about Latinas making history and the need for Latinas in public office. The child of Guatemalan immigrants and the first Guatemalan to be elected to the California Legislature, Torres was a bilingual 911 operator in California for 18 years. One night she took a call from a little girl who had been waiting for 20 minutes because of the lack of Spanish-speaking operators. By the time Torres got on the phone, she heard what was the banging of the child’s head on a table and gunshots. She was too late. This prompted Torres to organize so that the state would have enough bilingual operators to serve California’s rapidly growing Spanish-speaking population. Torres’ acumen for political organizing and working for the rights of her community continue today in her work as an assemblywoman.

Thus the 2010 census and Assemblywoman Torres’ story also remind us why things like Latina History day exists: to remind everyone that we are a people with a rich, complex, diverse, contradictory history in this country and in our countries of origin, and that we deserve visibility and representation. With this in mind, here’s a list of must-read books to brush up on your own knowledge of Latina history. Happy Women’s History month and Latina History Day!

Latinas in the United States: A Historical Encyclopedia (3 volume set) by Vicki L. Ruiz and Virginia Sánchez Korrol. This detailed text by two of the most formidable Latina historians of our time is a great source, especially for youth, for learning about the historic contributions of Latinas to this country.

From Colonia to Community: The History of Puerto Ricans in New York City by Virginia Sánchez Korrol. This book tracks the gendered and racial stratification in Puerto Rican migration to New York City.

Selenidad: Selena, Latinos, and the Performance of Memory by Deborah Paredez. The murder of Tejana transborder pop diva Selena in 1995 sent shockwaves through Latina communities across the globe; she continues to be remembered through art and performance.

Listening to Salsa: Gender, Latin Popular Music, and Puerto Rican Cultures by Frances R. Aparicio. From Celia Cruz to the sexist images on the covers of Fania records albums in the 1970s, this book is tour de force on race and gender in the history of salsa music.

Sonia Sotomayor: A Judge Grows in the Bronx / La juez que crecio en el Bronx by Jonah Winter. Use this book to help you teach your little ones about the humble Bronx beginnings of our first Latina Supreme Court Justice.

Between Two Islands: Dominican International Migration by Sherri Grasmuck. Read this to learn about the gendered stratification in migration and island politics that led many Dominican women to come to the East Coast as heads of households starting in the 1950s.

Mexican American Women Activists by Mary S. Pardo. This study of an activist group, The Mothers of East Los Angeles, shows how women’s collective organizing changed the perception of the region and the quality of people’s lives.

Prietita and the Ghost Woman/Prietita y la llorona by Gloria Anzaldúa. This story of one of the most famous women in the Americas, La Llorona, makes a good read for children.

This Bridge Called My Back: Writings by Radical Women of Color ed. Gloria Anzaldua and Cherie Moraga. Not solely about Latinas but strongly representing them, this classic feminist text should be read by anyone who is interested in how race, class, gender and sexuality inform the lives of women of color in the United States.

Photo is of Norma J. Torres from Flickr user The California National Guard under Creative Commons 3.0.