Because Catcalls Are Not Compliments - Ms. Magazine
Skip to content 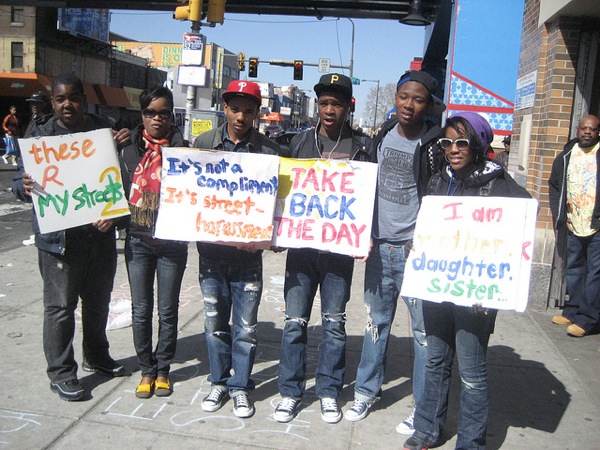 When I was in sixth grade, I had to walk a long way home from the bus stop. A few times, men followed me. I ran to a store so they wouldn’t know where I lived.

For many of the girls, this was the first time talking about these experiences. For all, it was the first time doing so in front of male classmates. The girls spoke about it in a matter-of-fact way, as part of their lives. The boys were stunned by what they heard; several commented on how much their awareness was raised.

Sharing stories to raise awareness is what the upcoming International Anti-Street Harassment Week is all about. Street harassment can only begin to be curbed after more people are aware, first, that it happens; second, that it happens a lot; third, that it happens to most women and girls and many men in the LGBQT community; and fourth, that when it happens, it has a negative impact on the harassed people’s lives.

From March 18 to 24, more than 100 groups in 18 countries will join thousands of individuals worldwide to collectively bring attention to this global problem. Tactics range from hashtags to radio campaigns to in-your-face street theater. Participants can choose whatever approach they think will be most effective in their community.

In Sana’a, Yemen, the Safe Streets Campaign will distribute copies of a book containing women’s street harassment stories to women’s groups and human rights groups, members of Parliament and journalists. They will also post it online as a PDF. This isn’t their first innovative approach to awareness raising: In 2011, they hosted an art exhibit (some of their work will be on display in a Washington, D.C. art show on March 18.)

This problem is damaging [our] community cohesion, but it is getting very little attention. … We want to unify our voices with the other campaign[s] to tell the world in one voice Stop Sexual Harassment.

Since football (soccer) is so popular in Germany, the activist group Pro Change will visit buses and subways to hand out a “red card” against sexism and street harassment. They will also go to clubs and pubs, distributing the cards along with special beer mats to spotlight the harassment that happens there.

In Delhi, India, Kuber Sharma and Dhruv Arora, two male activists with the anti-violence campaign Must Bol, launched a website called GotStared.At. The website allows people from anywhere to upload photos of what they were wearing when they were harassed, in order to dispel the myth that clothes cause harassment. The GotStaredAt Facebook page has anti-victim-blaming posters for download. Sharma and Arora say they’re involved because,

Street sexual harassment is probably the most rampant form of violence in Delhi … We all know that it happens, but few people want to do anything about it. Gotstared.at is an answer to people who hold women responsible for street harassment. It’s time the ‘good’ men…do something about it!

In Montreal, Canada, Women in Cities International will conduct a Women’s Safety 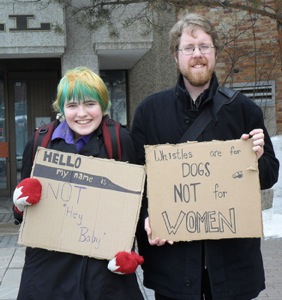 Audit Walk in partnership with CKUT-FM radio station and Concordia University’s Gender Advocacy Centre to evaluate the safety of the city’s streets. They have also released the initial findings of their three-year study on gender inclusive cities, which measures the safety of public space for women in four cities, based in large part on street harassment.

Dozens of events are occurring in the United States. See if one is happening in your area. There are many other ways anyone can become involved. Ideas on the website include:

However you can, in whatever way feels comfortable to you, you can participate in the week by simply starting a dialogue around the issue. Raising awareness is the important first step toward stopping street harassment.