Would I Lie To You? CPCs Claim Protection Under First Amendment - Ms. Magazine
Skip to content 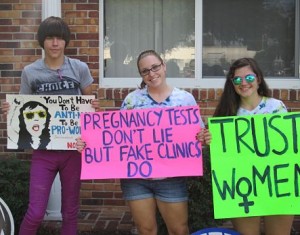 On Friday, a federal appeals court heard arguments over the constitutionality of two Maryland ordinances which require crisis pregnancy centers (CPCs) to provide clear and public information regarding the services they offer to women.

For those who are unaware of them, CPCs are anti-abortion organizations masquerading as women’s healthcare centers. They often use misleading advertisements to attract women seeking abortion advice, then impose their anti-abortion agenda on them–often by telling women outright lies about abortion. CPCs tend to be religiously driven and affiliated with anti-choice organizations; many do not offer any medical services at all.

Baltimore Ordinance 09-0406, which requires CPCs to display “a disclaimer … that the center does not provide or make referral for abortion or birth control services,” was signed into law in December 2009. However, it has remained in limbo since January 2011 when Judge Marvin Garbis ruled that the ordinance violates the freedom of speech clause of the U.S. Constitution and therefore cannot be enforced.

The second law (Montgomery Ordinance 16-1252) covers the Maryland county of Montgomery, which includes such cities as Rockville, Bethesda and Silver Spring, and has a slightly different focus: It requires CPCs to display bilingual (English/Spanish) signs which disclose that “the center does not have a licensed medical professional on staff” and state that the “Montgomery County Health Officer encourages women who are or may be pregnant to consult with a licensed health care provider.” While Judge Deborah Chasanow upheld the requirement that a facility marketing itself as a medical center for women should actually have medical professionals onsite, the judge also ruled that forcing CPCs to display signs advising women to consult a medical professional is in violation of the First Amendment. She has placed this aspect of the ordinance on hold pending a lawsuit against the county brought by a local CPC.

It is difficult to predict whether the ordinances will survive the legal challenges. Despite a lawsuit brought by a local CPC, San Francisco’s Pregnancy Information Disclosure and Protection Ordinance, passed in November 2011, remains in effect. However, a similar bill proposed in New York City by council member Jessica Lapin was blocked by a federal judge in July 2011.

The federal court is expected to take several weeks to deliver its verdict on the two Maryland ordinances.