It's Time to Desegregate Augusta - Ms. Magazine
Skip to content 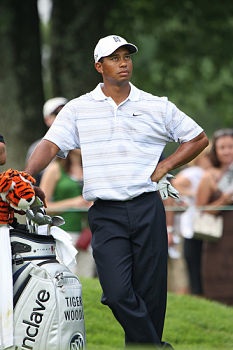 President Obama says he thinks women should be admitted to the Augusta National Golf Club, although he has not yet recommended a boycott. That would be the highest moral ground, but his statement is still important.

So how come Tiger Woods doesn’t weigh in on this issue? Because he plays the moral “no” ground. He’s playing in the Masters Golf Tournament again this year, which began today at Augusta. Tiger could refuse to play until the boys let the girls in. He won’t. Mr. Woods earned my earnest contempt years ago. I knew he was morally challenged long before making news about his marital problems, without knowing about his double life, cheating addiction or peccadillos with numerous “dillos” with his pecco. Oh, no.

The exclusion of females from the location of the Masters is back in the news because IBM now has a female CEO, Virginia Rometty. All of a sudden, hypothetical apartheid became specific gender discrimination when push came to shove, or putt came to drive: IBM has not said a word about pulling out sponsorship now that Augusta has not invited Ms. Rometty to its membership. No, Virginia, there is no sandy trap. You are not as good as a man in IBM’s eyes. Sorry.

In case you’re not a golf enthusiast, have been on a desert island, or don’t follow sports in general, let me give you a thumbnail of one of the most important golf events on the planet. It’s a VERY big sports deal. It’s in Augusta, Georgia. It’s also the equivalent of “whites only” buses, water fountains and lunch counters. However, gender apartheid is often winked at, minimized and certainly accepted at the most powerful and monied levels of our society.

I can hear it now: “Oh, but Ellen! Where’s your sense of humor?! Boys will be boys, and can’t they just play a game without including the girls? You’re making a water hazard out of a puddle!”

Let me disabuse you of the notion that golf is just an innocent little game: We’re talking billions of dollars and a social network that reaches into the highest levels of government, military and capitalism. Before I give you a little profile, let me lead you to one of the most inspiring gender analysts we have writing today: Martha Burk. I’m proud to claim her as a friend, and admit I have author envy. Ms. Burk wrote a book I wish I’d written called Cult of Power: Sex Discrimination in Corporate America and What Can Be Done About It. In addition to writing Cult of Power, Martha led a protest in 2003 that brought a lot of attention to gender apartheid in golf. But don’t take my word for it, get the book and read it cover to cover. It’ll explain just why women of all colors face such a major glass ceiling in the Fortune 500 corporations, nationally and internationally.

Which brings me back to Tiger Woods. Tiger was not only the youngest golfer to win the Masters tournament at Augusta, but the first man of color to do so. The Augusta Golf Club let the first African American into its hallowed ranks for the first time in 1990, only 7 years before Woods played and won.

Tiger Woods has more authority and moral positioning to stand up for ending “men only” at Augusta than almost anyone else I can think of… but of course, he wouldn’t because his behavior rather indicates that women are playthings, not people to be taken seriously. If I’m being too harsh in that judgment since I don’t know the guy, at the very least, his sexual shenanigans would make him reluctant to take a visible stance about ending discrimination against women.

Woods has or is purportedly receiving treatment for his sex addiction. Typically, treatment involves making “amends” for commissions and omissions that are based in the person’s “drug” of choice, which in this case, seems to be heterosexual sex outside of marriage. It’s not too much of a stretch to say that Woods has taken objectification of women to new public lows.

Hey, Tiger! Do I have an amends idea for you!

Use your “bully pulpit,” or Tiger pulpit in this case, to insist that Augusta Golf Club integrates its club to include women. Why? Because it’s a disgusting bastion of male privilege and for you to take that kind of stand would be a triumph of morality.

Again, Burk’s Cult of Power is a must-read, but it doesn’t take a hole-in-one golfer to understand that corporate deal makers use “men only” clubs to maintain power, cut deals and yes, exclude women from the halls of power and decision-making. Having a penis apparently is still the most important club to have in one’s bag.

The term “bully pulpit” came from President Teddy Roosevelt’s term for the White House and its astounding power to impact opinion and change. Roosevelt used the term “bully” as an adjective, like “great” or “magnificent.”

Wouldn’t it be “bully” if Tiger could turn his embarrassment into a major stride for women? That would take more than golf balls. I’m not holding my breath.

Tell Tiger Woods to speak up against the sexism of the Augusta National Golf Club:

You can also read Martha Burk’s take on the exclusion of women from the 2012 Masters.