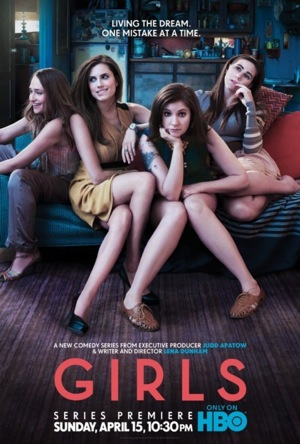 As a mid-to-late-20-something woman, I have grown up with a wide range of pop-culture representations of women, from the Wakefield twins of Sweet Valley High to Cher from Clueless to any part Winona Ryder played to blandly interchangeable rom-com leading ladies to the women of Sex and the City.

I have loved and hated these women. But I’ve never fully related to any of them.

But this year, from the fierce and loyal Katniss Everdeen of The Hunger Games to the deeply flawed and selfish Mavis Gary in Young Adult, I’m finally finding women in film and TV that resonate with me. And no one has got my personal zeitgeist as right as Lena Dunham in her terrific new HBO series, Girls.

In Girls, Dunham, who wrote and directed 2010’s Tiny Furniture, focuses on Hannah (Dunham), Marnie (Allison Williams), Jessa (Jemima Kirke) and Shoshanna (Zosia Mamet), a group of 20-something friends who live in New York while navigating jobs, dating and the city. Yes, it sounds like Sex and the City 2.0., but trust me, it’s not.

Sex and the City‘s portrayal of friendship, sex and relationships were often undercut by an overriding interest in consumer culture and designer fashions. Hell, I’d never turn down a Chanel bag, but I recognized that this was a lifestyle that the majority of young women could never access. Girls, on the other hand, encompasses the joy and sadness of what it’s like to be an under-employed, uncertain 20-something woman in a post-sexual revolution and economically downtrodden world.

This isn’t to say that Girls doesn’t contain its own signifiers of privilege: These are over-educated white women of the upper middle class. In the pilot episode, we learn that Hannah’s parents have been paying her way for about two years, and this seems to be the case for the majority of her other friends. But Dunham is careful to acknowledge this privilege. In a conversation with Adam, the guy she’s sleeping with, for example, Hannah worries that he will judge her for the fact that her parents have been supporting her. “Did that make you feel sick? Make you not want to talk to me?” she asks him.

Despite their privilege, the characters are struggling, at least in a middle-class way. Hannah has been working at an unpaid internship for more than a year. Her friends lament that their liberal arts degrees have left them in severe debt and underemployed while they live in cramped and shitty apartments that they can’t afford. In an economic moment when 12 percent of women ages 20-24 are unemployed and another 40 percent work part-time, it’s refreshing to see a mostly accurate depiction of the world of few and low-paid jobs. However, at least in the first three episodes, Girls has failed to acknowledge how very white the cast is, and how women of color would offer a different perspective on these 20-something dilemmas. I am curious to see, as the series progresses, if Dunham will bring such a perspective into the show.

Despite its lack of a serious class and race consciousness, Girls does address other feminist issues currently in play, among them body image, abortion, relationships within a social media age and street harassment. In another series, these issues might be the focus of one episode (i.e. the abortion episode of SATC), but in Girls they become everyday topics.

In the typical romantic comedies of recent years, starring, say, Jennifer Garner or Katherine Heigl, the female star’s only obvious flaw is that she’s clumsy and trips over curbs–usually into the arms of the man who becomes her love interest. But in Girls, the characters have sex with the wrong guys or no sex at all, read crappy romantic advice books, don’t have flat stomachs and have no idea what they are doing with their lives. As an underemployed 20-something who has been and done all of the above, Girls is the feminist media I’ve been waiting for, because there’s no judgment on the characters’ choices or fuck-ups.

At one point in the pilot, a drug-altered Hannah spills her job and financial frustrations to Jessa and Marnie, then leaves to confront her parents about cutting her off. Jessa says to Marnie, in what seems like willful denial, “She [Hannah] seems like she’s in such a good place.” While Hannah and many women today may not be in such a great place, Dunham’s ability to humorously/seriously express our hopes and contributions may help us get to a better one.