"A Woman, A Lesbian, A Poet" - Ms. Magazine
Skip to content 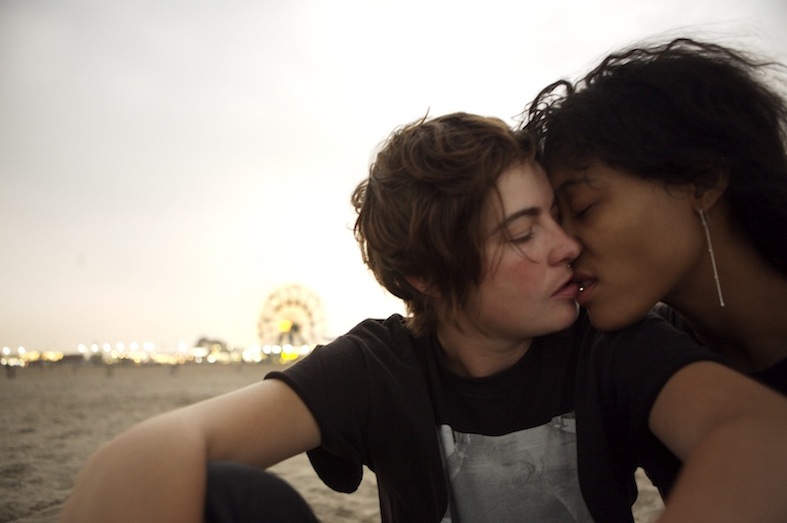 Why a publication devoted to lesbian poetry and art? I recently put this question—and others about what it means to write directly about lesbian sexuality and identity—to a couple of poet friends, Sarah Sarai and Eloise Stonborough.

New York-based Sarai’s poetry collection The Future Is Happy was published in 2009 by BlazeVOX. She also writes fiction, and you can find links to her work at My 3,000 Loving Arms. Stonborough is a postgraduate student at Oxford University working on a DPhil in personality and prosody in early 20th century poetry. She is the co-editor of The Salt Book of Younger Poets.

Ms. blog: Sexuality, sex, sexism: What does it all have to do with poetry and art?

Sarah Sarai:If it’s in your heart, it’s in your art. That’s the deal. With sexuality comes longing, which in and of itself is a furnace for creativity.

Eloise Stonborough: The lyric voice. We are writing in a tradition which privileges the impersonal, the objective and the rational. How can one reject the “I” when even to say “I am a woman, I am a lesbian and I am a poet” can seem impossible? To write personally as a woman is to be “confessional” but a man is “insightful” or “soul-searching.” Poetry does not have to be political to be a political act. I believe we are obligated as queer women to speak out and to work to have our voices enter the cultural debate.

I often get the feeling that lesbian poetry is considered a joke and couldn’t possibly be real, serious poetry. How do you honestly feel about a journal devoted to lesbian poetry and art? Is such an enterprise doomed to failure?

SS: I understand feeling that way. I understand feeling that male, gay poetry is more important than womanly outputs. I have observed, yes, a few times, maybe isolated incidents, dismissal of things female, and I know I am not alone in this observation. Best, though, to be thankful any time a woman is in print, or when a lesbian such as yourself, Mary, creates a gorgeous literary journal devoted to lesbian poetry and art. It’s so difficult to keep any journal going against a backdrop of national financial ruin and lack of support for the arts, that to particularize would only further discourage. The journals are necessary and yours, Lavender Review, is not only necessary, it is read and praised and makes us happy.

ES: In a word: no. Any art from a marginalized group is first dismissed as necessarily trivial or lesser because it doesn’t value the same ideals as the mainstream. It is only through iteration and resilience that the markers used to keep us out become the elements for which we are prized. That’s why a journal devoted to lesbian poetry and art is vital: it rejects tokenism; it makes visible the common themes between otherwise dissimilar writers and artists; and, most importantly, it shows the range and prowess of those who would otherwise be limited to one feature of their work.

Do lesbians see and understand things differently from other people?

ES: I don’t think there’s an easy answer to that. Yes, no and sometimes all seem to be simultaneously valid positions. Personally, I know that I can only see and speak from a lesbian subject position. I know no other. That doesn’t mean that everything I do is necessarily bound by it—we all pay our bills with dread regardless of whom we love—but I am not only a lesbian while I am holding hands with a partner. My work and my politics are hugely influenced by different power dynamics of queer relationships: Both the love poems I write and the principles I hold come out of a deep-rooted belief in egalitarianism. I know it is possible, despite everything we are told, to live and to love without controlling or submitting to another, and perhaps I would have never felt that so profoundly were it not for my lived experience.

Who are your favorite lesbian poets? Do you deliberately seek out poetry and art by lesbians?

ES: My favorite lesbian poets are often those I loved as an adolescent, who wrote about a life I wished to have and feared I never might: U.A. Fanthorpe, Marilyn Hacker and Elizabeth Bishop being the first to spring to mind. The ones I love as an adult, poet and scholar are those whose queerness seems to guide their form as well as their content: Aphra Behn, Charlotte Mew and Brenda Shaughnessy. I always worry that I do not invest enough in finding new lesbian writers, but those I adore speak to me in a way few others can. 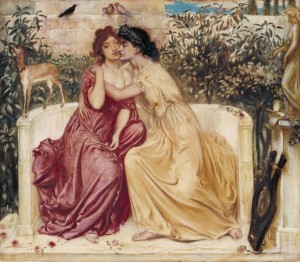 Kay Ryan and Mary Oliver are best-selling poets who keep a sharp separation between their lesbian identity and their poems. Are they best-sellers precisely because they do this?

SS: Really? Best sellers and poetry in the same sentence?  If anyone could identify the “why” of a bestseller they’d hoard it in their silvery tower high atop a barren landscape and then put it on Ebay. That said, Ryan and Oliver have chiseled their feminisms and objects of affection (flesh, idea, thing) so finely that something stark, stripped-down and true is revealed. That revelation is thrilling, and I think it’s the thrill that draws in readers. Miss Dickinson told us that readers, and poets as readers, want the tops of our heads taken off and stirred (or shaken). One of the thrills of reading Ryan is watching her elicit feeling and discovery from so few words. With Oliver I sense I’m on a short, grounded journey; I arrive, somewhere, because her poem is a pathway.

Our assessment of success or effectiveness is hindsight and approximation. Who knows why? Even the ruddiest of famously heterosexual male poets is canny in his presentation of self on the page. Poetry isn’t a mission statement. Poetry isn’t a short bio on Let’s Meet at a Motel 6 for a Siesta Hour dotcom. It’s, well, poetry, and riddled with poetic images and words poesyesque.

ES: As a British person I don’t know enough of the internal politics of mainstream U.S. poetry to want to make too many broad claims, but if that is the case I am both unsurprised and saddened. While I may not particularly enjoy their work, or that of a comparable British poet such as Carol Ann Duffy, I value their visibility. I would hope they were aware of the vast influence of strong lesbian role models on young women, both straight and queer, and that they were willing to use their success for the benefit of their potential successors.

At Harriet, Cathy Park Hong wrote of meeting Adrienne Rich: “She talked about … how the poetry establishment spurned her when she chose to write openly about her sexuality.” Has anything changed since Rich’s heyday?

SS: Woman, thy name is struggle. I mean that. Point made, case closed. As for the “poetry establishment,” any poet who wants to keep sane, at least somewhat balanced and write at her most brutally lovely best ignores any establishment. Unless of course she can’t. Sigh.

ES: Yes and no. It is much easier for a lesbian to write, to the extent of it almost being easier for queer women to be recognized by the establishment than a straight woman. I think, however, that some of that visibility is at the expense of innovation. The continual expectation to be a certain, proscribed kind of writer and to leave the “real work” of poetry to others keeps us always as “lesbian poets” rather than “poets.” How to reconcile this with the importance of being proud of our distinct experiences and cultures? I have no idea.

The Kickstarter deadline is May 4, so if you want to support lesbian poetry and art, give a click!

Top photo by Leslie Satterfield, “I thought she was mine (2),” (2008), by permission. Painting by Simeon Solomon, “Sappho and Erinna in a Garden at Mytilene” (1864) from Wikimedia Commons.