Girls Need to Say "Math Is for Me" - Ms. Magazine
Skip to content 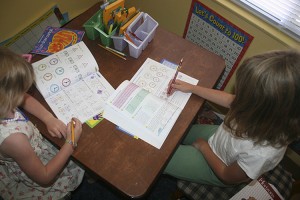 Ideas about women not being “hardwired” to do math are falling like dominoes in the research area.

But deep down, do girls and women really believe it? And will they take steps, as they grow, to make high-paying careers in science, technology, engineering and math (STEM) a reality?

New research finds that the answer may be no.

Researcher Pascal Huguet of Aix-Marseille University in France found in 2009 that middle school girls did less well on a math test when told that boys generally did better in math than girls. Without the negative information, they score nearly as well as men. In fact, by middle school, the cause is already lost for many girls. Stereotype threat–that confidence-killing burden of anxiety–has already set in.

Yet girls and boys in elementary, middle and high school take math and science courses in roughly equal numbers, and girls perform at least as well as boys. More good news comes from the Girl Scouts Foundation. Its recent study finds that 74 percent of teen girls are interested in STEM and 82 percent see themselves as smart enough to have a career in STEM.

But even as college-educated women have increased their share of the overall work force, they hold a disproportionately low share of STEM undergraduate degrees, particularly in engineering.

Women with a STEM degree are less likely than male counterparts to work in a STEM occupation; a 2011 report from the Commerce Department finds that women hold less than 25 percent of [STEM jobs].

This is important for women’s financial futures as well as the country’s technology: Women with STEM jobs earned 33 percent more than comparable women in non-STEM jobs.

Fortunately, there is a window of opportunity. A team led by psychologist Anthony Greenwald at the University of Washington discovered that although girls in the early grades see math largely as a male preserve, they haven’t yet made the connection that “because I am a girl, math is not for me.” So there is a short period of time during which girls are relatively open to the idea that they can enjoy and do well at math.

We need to do all we can to help math-and-science girls believe in themselves. We also need to help them believe that STEM careers are not for lonely male “nerds.” Engineering and science are typically collaborative efforts; the image of the socially awkward loner is a far cry from reality.

Also, we know that women often look for jobs that have a social impact; where they can do good while they do well financially.  STEM offers plenty of that. Scientific teams drastically reduced childhood leukemia, are saving the Everglades, preserving sea turtles in the Caribbean, reducing AIDS in Africa. This is too often not what girls think when they hear the words “math and science.”

We need to adjust that picture.

About Caryl Rivers and Rosalind Barnett