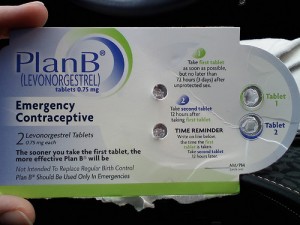 A New York Times analysis has found that the morning-after pill—drugs including Plan B One-Step and Ella, which are taken to prevent pregnancy after sex—do so not by keeping fertilized eggs from implanting in the womb, but by delaying ovulation. Some pills also thicken cervical mucus so that sperm have difficulty swimming. However, labels on the inside of boxes for the pills say they may work by blocking fertilized eggs from implanting in a woman’s uterus—descriptions that have led to some religious groups, conservative politicians and others to claim that the pills cause abortion.

Dr. Donna Harrison, director of research for the American Association of Pro-life Obstetricians and Gynecologists, told the Times that using the pills is the “moral equivalent of homicide.”

Although the websites of medical authorities, including the National Institutes of Health and the Mayo Clinic, have said that emergency contraceptives may prevent implantation of a fertilized egg, the New York Times has discovered that such a result is not borne out in scientific studies:

It turns out that the politically charged debate over morning-after pills and abortion, a divisive issue in this election year, is  probably rooted in outdated or incorrect scientific guesses about how the pills work.” [my emphasis]

These findings about how emergency contraceptives work would mean that drugs like Plan B One-Step and Ella “would not meet abortion opponents’ definition of abortion-inducing drugs.” In contrast, RU-486 can be called an abortion pill “because it destroys implanted embryos, terminating pregnancies.”

Despite the lack of scientific evidence, the Food and Drug Administration included information about the “implantation idea” on labels for emergency contraceptives. During the approval process for the drugs in 1999 the manufacturer of Plan B—Barr Pharmaceuticals, which has since been acquired by Teva Pharmaceuticals—had asked the FDA not to include the implantation idea on it. But the FDA decided to because of hypotheses about how the pills worked:

Experts say implantation was likely placed on the label partly because daily birth control pills, some of which contain Plan B’s active ingredient, appear to alter the endometrium, the lining of the uterus into which fertilized eggs implant. Altering the endometrium has not been proven to interfere with implantation. But in any case, scientists say that unlike the accumulating doses of daily birth control pills, the one-shot dose in morning-after pills does not have time to affect the uterine lining.

“It takes time for an endometrium to change, for its cells to divide,” said Susan Wood, a biochemist who, shortly after Plan B’s approval became the F.D.A.’s top women’s health official and later resigned, frustrated with the delay in making the pill available without prescription.

“Wishful thinking” on the part of scientists also played a role, as some of them “thought that if it could also block implantation, it would be even better at preventing pregnancy.”

But starting in 2002, studies offered evidence that morning-after pills do not block implantation. Indeed, some organizations, when confronted with the New York Times‘ findings, changed their information to reflect these:

After the Times asked about this issue, A.D.A.M., the firm that writes medical entries for the National Institutes of Health website, deleted passages suggesting emergency contraceptives could disrupt implantation. The New York Times, which uses A.D.A.M.’s content on its health webpage, updated its site. At the Mayo Clinic, Dr. Roger W. Harms, the website’s medical editor in chief, said “we are chomping at the bit” to revise the entry if the Food and Drug Administration changes labels or other agencies make official pronouncements.

Despite more and more scientific studies in the past decade, abortion opponents have continued to resist changing the labels. For instance, Dr. Harrison told the New York Times that while the Plan B studies were “led by ‘a good researcher,’ …  she would prefer a study with more women and more documentation of when in their cycles they took Plan B.”

As the New York Times underscores, the stakes about the information on the morning-after pill’s label—on whether or not the “implantation idea” is specifically noted—are high. Controversies about contraceptions and about emergency contraception have become a factor in the debate about President Obama’s health care law and, indeed, about the presidential race.

A number of religious groups and abortion opponents are fighting the law on the grounds that it would require third-party insurers to cover contraceptives for employees of Roman Catholic schools, hospitals and organizations, as well as other institutions that are officially—and religiously—opposed to birth control. Supporters of “personhood” initiatives who define fertilized eggs as people say that their proposals will ban the emergency contraceptives if they do prevent implantation.

The FDA and government agencies need to act quickly and efficiently to revise the labels of the morning-after pill to reflect the latest scientific evidence about the drugs not preventing implantation. Abortion foes are already criticizing scientists and government agencies for letting ideology seep into their decisions. The FDA and scientists need to take control of the conversation and make it clear to the public that emergency contraceptives delay ovulation and do not prevent implantation, not only for the sake of women’s health, but for the sake of science and scientific accuracy.