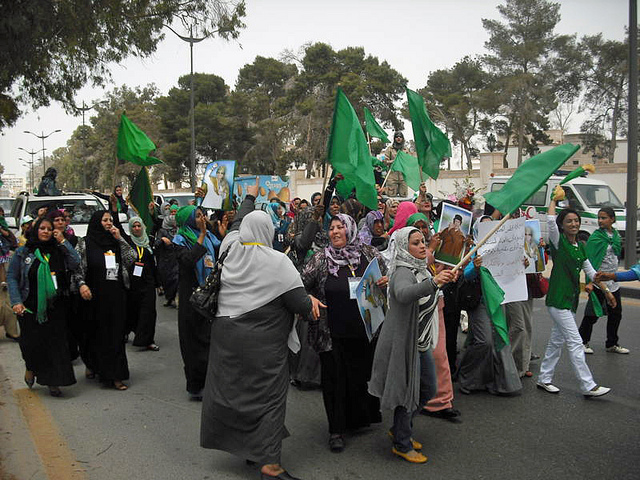 When I lived in Libya last year, I spent many evenings sitting with the daughters of my host family in the living room of their apartment. I remember the eyes of our unwelcome neighbor, Muammar Gaddafi, peering at us from a large billboard across the road. The father of the family kept a watchful eye on his daughters too, controlling their movements much more than those of their brothers. Both men were powerful, sometimes menacing, presences in the girls’ lives.

Now the dictator has gone, but the father and his restrictions remain. I wonder if the girls I knew will go back to their lives as before or demand greater freedoms?

Alaa Murabit, a Libyan activist and founder of the Voice of Libyan Women (VLW), remembers how, under Gaddafi, “men felt they could harass and marginalize women with no consequences.” Discrimination against women went unchallenged by the regime, as did all prejudices which helped to create a weak and fragmented society. Social taboos prevented punishment of domestic violence, rape and harassment. Some have said that the Gaddafi regime was responsible for “rehabilitation centres” where “shamed women” were imprisoned, only to be freed if their male guardians agreed they had been morally reformed.”

Women’s groups across Libya are now campaigning for greater rights and recognition, but often face suspicion or hostility rooted in this conservative tradition. “We have a patriarchal culture” explains Zahra Langhi of the Libyan Women’s Platform for Peace. “It’s not a matter of just changing legislation; we need a cultural and educational revolution.”

Women’s rights can have a bad reputation in the region. Writing for the Libya Herald, Rhiannon Smith commented recently that those women in Libya “not on the NGO contact list” are “vociferous in their rejection of this women’s movement, accusing it of damaging Libyan culture” and “being anti-Islamic.” Western criticism of Islamist political parties’ feminist credentials fuel fears that women’s emancipation demands the imposition of secularism and “Western values.” Libya, after all, has a majority of conservative Muslims, many of whom were persecuted for their religious views under Gadaffi.

Women also remain deeply entrenched in political divisions across the country, negating female solidarity. Rival militias in Libya are still wrestling for power. Berber minorities are still lobbying for recognition. Gaddafi supporters such as Nisreen Mansour al Forgani–nicknamed “Gaddafi’s Girl Executioner” by the Daily Mail for allegedly shooting 11 rebel soldiers–may always remain pariahs in the eyes of women who lost loved ones in the war.

Despite the challenges, more and more women are pushing for change. When women were denied a quota in the constituent assembly, hundreds mobilized across the country to demonstrate. It worked: The Transitional Council agreed to guarantee alternate men and women candidates on the ballot.

Organizations such as the VLW make sure they involve women from all regions and backgrounds. They used religious arguments in campaigns, negating the “secularist” stigma. Last February, it helped organize the International Purple Hijab, Scarf and Tie Day, which saw women wearing a purple hijab to demonstrate their opposition to domestic violence on religious grounds. It was one of the group’s most successful campaigns so far. “We have a long road ahead,” says Murabit. It may seem difficult for women to effect change, but it is worth remembering that stranger things have happened in Libya this year.

Gaddafi’s billboard has now disappeared from opposite my old flat in Tripoli. Instead, election posters decorate the city. A proud woman’s face is depicted in one, illuminated by a white light. “Your voice,” the poster reads, “is the future of your country.” Whatever the girls I knew choose to do, the picture speaks directly to them.

Photo of Libyan women in support of Muammar Gaddafi from Flickr user Magharebia under Creative Commons 3.0.