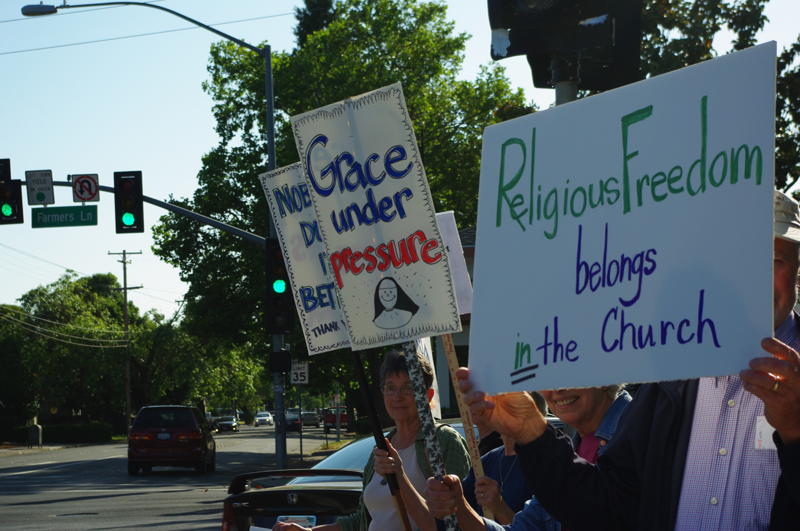 Who isn’t a raging “feminazi” to notorious misogynist Rush Limbaugh?

During his June 13 show, the right-wing political “entertainer” griped about how Catholic nuns and the reaction engendered by the Vatican’s recent “doctrinal assessment” of their leadership conference (in other words, its attack on them)—including Nun Justice rallies, a Change.org petition and an upcoming nine-state bus tour—were receiving more media attention than last weekend’s Stand Up For Religious Freedom rallies. Instead of leaving it there, Limbaugh went on to attack the sisters for disagreeing with American bishops on the Affordable Care Act, saying the Vatican is right in “slapping them down”:

Yeah, but what are the nuns doing? Do you know what the nuns are doing?  The nuns have gone feminazi on everybody. This small group of nuns in the Catholic Church is going feminist, and the Vatican is obviously–well, a figure of speech, slapping them down. And the Vatican is trying to tamp it down and say, ‘No, no, no, that doesn’t happen. There’s no such thing as a feminist nun.’

Limbaugh  should learn a thing or two about Catholic history before disparaging the sisters on air: Many are feminists, not just a “small group.” The Leadership Conference of Women Religious, the organization investigated by the Vatican, represents 80 percent of U.S. nuns—45,600 sisters. Although there are just as many conservative sects among the women religious as progressive ones, all nuns advocate for the same tenets of social justice: Social and economical reform is needed to liberate all people, regardless of gender, race or class. Since the late 20th century, there has also been a rise in nuns supporting pro-choice and pro-LGBT initiatives.

In many circles, nuns are considered the original 20th century feminists: They were receiving Ph.D’s (sometimes multiple ones), leading schools and institutions and working as doctors long before it was fashionable for women to hold these positions.

Religious sisters have always been at the forefront of women’s issues, whether in the U.S. or around the world. The nuns’ support of the Affordable Care Act is just the latest effort in their work toward social equality. As Sister Simone Campbell, executive director of the social justice organization NETWORK, told Stephen Colbert Monday night, “We’re certainly oriented toward the needs of women and responding to their needs. If that’s radical, I guess we are.”

Limbaugh has been digging holes for himself for decades, but the radio host faced the harshest scrutiny of his career last March when he called then-Georgetown University law student Sandra Fluke a “slut” and “prostitute,” among other derogatory remarks. #FlushRush Twitter campaigns led by Ms., Media Matters and numerous other organizations resulted in more than 100 advertisers boycotting Limbaugh’s radio program. Obviously, he still doesn’t know when to shut up.

AOC vs. Boebert: Addressing the Hollow at the Heart of Trumpism