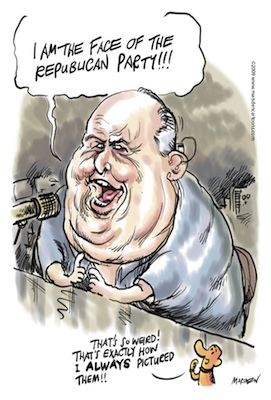 Much of the uproar over notorious misogynist Rush Limbaugh has died down since his personal attack on Sandra Fluke during several of his radio shows last February and early March. But high-profile advertisers continue to ditch the disc jockey.

UPS is the latest company to pull its advertisements from the program. On July 3, the package delivery company joined the growing horde of nearly 100 major businesses, including corporate giants McDonald’s, Walgreens and Arby’s, in pulling its advertising dollars from the “shock jock’s” weekday show.

Countless customers bombarded the company with emails, phone calls and complaints via Twitter, demanding the cancellation of ads in solidarity with Fluke, who was labeled a “slut” and “prostitute” by Limbaugh after her congressional testimony in support of the Obama administration’s HHS mandate requiring insurance companies to cover contraception for women.

UPS responded to increasing complaints with the following message: “We have alerted our advertising group [to your concerns] and removed the ad from this programming.”

UPS was hardly the first business to be targeted by online anti-Limbaugh campaigns. The Limbaugh protests originated in early March through numerous social media outlets, with Twitter being its most powerful influencer. Ms. and the Feminist Majority Foundation led the #FlushRushNow campaign with the help of NOW and Media Matters, while the #StopRush movement resulted in a website that keeps tabs on Limbaugh’s latest ad casualties.

Although Limbaugh maintains that his ratings have “skyrocketed” since the Fluke attack, the owner of Cumulus radio tells a different story. Lew Dickey, CEO of Cumulus Media, told financial analysts the advertising boycott had “hit [the company] pretty hard” and cost Cumulus “millions”–an estimated 3.5 percent revenue loss in the first two quarters of 2012. Cumulus owns 38 of the 600 stations that air Limbaugh’s show, which is nationally syndicated by Clear Channel Media.

On the same day UPS withdrew its support of the show, Limbaugh continued his trademark sexist spectacle, saying,

The idea that women are the biologically weaker sex, incapable of controlling their emotions, is nothing new for Limbaugh. Who could forget his recent derogatory remarks against Secretary of State Hillary Clinton for being “just a secretary?”

It’s a shame to indulge Limbaugh with any media coverage–he certainly needs no further press. But if his advertisers stop enabling his vitriol, maybe we can flush Rush for good.

Cartoon of Mr. Limbaugh by Ian Marsden via Wikimedia Commons.