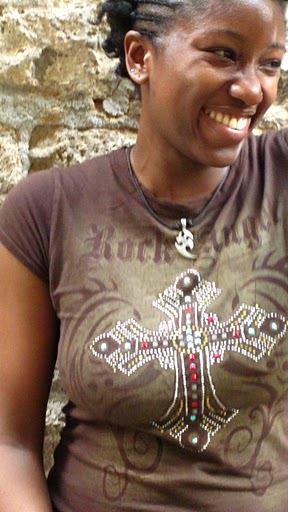 Spectra, 30, is an award-winning Nigerian writer and women’s rights activist, and the voice behind Spectra Speaks, which publishes news, opinions and personal stories about gender, media and diversity as they pertain to Africa and the Diaspora. She is also founder and executive editor of Queer Women of Color Media Wire, a media advocacy and publishing organization that amplifies the voices of lesbian, bisexual, queer and/or transgender women of color, diaspora and other racial/ethnic minorities around the world.

Post Pride:
Saying No to Saviorism and Celebrating Africa’s Resistance
“Reflections from a Woman of Color on the War on Women: My Sisters-in-Arms, We Are NOT United”

What topics do you find you write about most frequently? My writing isn’t so much about the topics I write about as it is how I write about them. There are the usual suspects–women, gender, LGBT and other identity issues–filtered through an international lens due to my Nigerian heritage and media advocacy and development work in Africa. But I also take the approach of highlighting solutions versus contributing to the constant re-articulation of problems I find over-saturates the feminist blogosphere.

I pride myself on thinking forward, and so I push myself to write from a place of hope and positivity. I believe that personal relationships, not just rhetoric, are the building blocks of progress, and that winning hearts–not just arguments–are what bring about real change. My Afrofeminist principles are a roadmap for navigating the spaces between us as human beings, towards deeper, more empathic connections. My mantra is “Love is My Revolution”.

How has Afrofeminism informed what you write/focus on? Afrofeminism is how I move through the world; how I live, learn and evolve. Afrofeminism is my personal compass, a way for me to stay centered as I navigate life as an idealist using a constellation of frameworks–feminism, social justice, spirituality and others. Afrofeminism guides every step I take forward, as it is grounded in my multi-layered, trans-national identity and personal experiences.

For instance, as an African woman, my feminism manifests as an unapologetic focus on the empowerment of other African women and the diaspora. As the executive editor of Queer Women of Color Media Wire (QWOC Media Wire), I’m intentional about publishing content that portrays the diversity of voices and experiences of the diaspora from all over the world, not just western countries.

Have you found that blogging/Twitter/the Internet in general helps the reach/impact of African feminists, and if so, in what ways (or why not)? Absolutely. I once thought I was the only queer Nigerian on the web. I tweeted that one day, only to have it retweeted by at least five other queer Nigerians. And with that, we each found community. The same has been true for finding other African feminists.

I’d felt excluded from mainstream feminist spaces as a woman of color in the United States (and furthermore as an African immigrant, even within women of color feminist spaces). Writing about African women’s issues has exposed me to an entire network of inspiring African women writers, activists and feminists online. For instance, earlier on this year, a group of us decided to start using the hashtag #afrifem to organize conversations around African feminist issues on Twitter. I now follow it religiously to stay up to date on what my sisters are doing in different parts of the world and, of course, engage in challenging, important conversations with other African feminists. Yet, the benefits of this haven’t just been experienced virtually; using online tools has also made it possible to connect with African feminists offline, too.

The relationships I’ve cultivated online directly resulted in an invitation from one of my tweets to participate as a panelist at a development conference in Cape Town, South Africa, where I met dozens more African feminists–including many of the women I’d already been chatting with daily for months, and LGBT African activists, some of whom I’m working with to host storytelling workshops for African women this summer.

What pitfalls/challenges have you experienced as an African feminist? The experience of merging my online and offline African feminist network has been incredibly affirming of the power of using online tools to build community. Yet, it is also important to acknowledge that there are many African women who do not have access to the Web, and thus are left out of many important conversations. Where possible, I use my privilege as a writer to highlight work being done by people who are unable to do so themselves, but I’ve on occasion been faced with the question about whether or not something I’ve written is good advocacy or appropriation. For now, my rule of thumb as a media activist is ‘highlight, don’t re-tell,’ but this gray area remain challenging to navigate.

One other challenge has been far less potent than I imagined it would be, but is still worth highlighting, as it happens in almost every cultural context. My queer identity has at times called my ‘Africanness’ into question. And in instances when it hasn’t, LGBT African issues are often sidelined, treated as fringe or tangential. This has been frustrating, as I don’t want to see the African women’s movement repeat the same mistakes as the women’s movement in the U.S.–leading with ‘umbrella unity’ instead of an intentional approach to diversity.

How do you ensure that your voice/opinion/story is heard within Western/American feminism? Frankly, ensuring my voice is heard within Western/American feminist spaces isn’t something I prioritize in my work; not because engaging people across cultures isn’t important (it is), but because constantly responding to what western feminism is or isn’t (doing) constricts my voice to being reactive (i.e., delivering constant criticism). I believe my voice as an African woman is more powerful when it proactively works alongside other African voices to tell our own stories, set our own agenda and come up with solutions for ourselves.

As I’ve lived in the U.S. for more than a decade, however, I do engage with western feminism; building bridges is necessary since we’re all working towards similar goals. To this end, by writing and producing media as an African feminist, I not only do my part towards the achievement of those goals, but hold western feminists and media accountable to my perspective and highlight the work of other African woman and [people of the] Diaspora.

Spectra is currently fundraising on indiegogo for her six-month project training African feminist and LGBT organizations to use social media to tell their own stories.

More African Feminist blogs to check out (please add your favorites in the comments!):