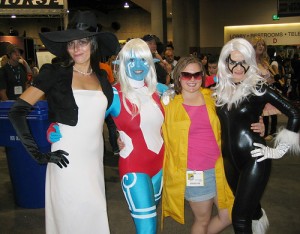 This year, 40 percent of the attendees at the just completed annual Comic-Con were women. If only that percentage was reflected in the event’s programming.

Instead, the majority of programming consisted of panels where the ratio was (at best) one woman for every five men. Though it’s true there are more strong women’s roles than before in television, film, games, comics and graphic novels (as discussed here), there is no equivalent growth in the number of women writing, producing and directing that media–let alone equivalent numbers of men and women on the Comic-Con panels.

Of all the programs I attended, only one panel consisted entirely of women–Entertainment Weekly’s “Powerful Women in Pop Culture (aka Women Who Kick Ass!).” Tellingly, none of the powerful women featured were directors or producers: They were actors. While the growth of powerful women’s roles is certainly something to be celebrated, it would be nice if growing opportunities for women actors to play “kickass” roles were accompanied by more woman power behind the cameras. Panelist Kristin Kreuk (Smallville, Beauty and the Beast) spoke to this problem: “We need to make sure that there are writers that are women and producers that are women.” Anna Torv of Fringe pointed out that while there are more strong women leads these days, the vast majority of supporting characters are still men:  “For every female lead there are five male supporting characters. It’d be nice to even that field a little bit.”

The panelists implicitly questioned the “kickass” sub-title, arguing that a reconsideration of what defines a “powerful woman” is in order. “When I think of a strong woman, I don’t just think of a woman who can kick people,” said Kreuk, later adding that “an emotional woman is not a weak woman.” Sarah Wayne Callies (Walking Dead) emphasized the importance of featuring strong mothers, citing her character Lori as a good example of a woman who is strong in more than just a kickass way.

The expansion of what defines being “badass” was also interrogated by the panelists. For example, when asked what badass thing they had done in the past year, Lucy Lawless (Spartacis) said, “I got arrested on an oil rig that was heading up to the Arctic.” She explained that her children should grow up in a clean environment and that it was her responsibility to make sure that happened. Callies noted her work with refugee women and said she recently bought her four-year-old daughter a bow and arrow; “I don’t know if I am a badass, but I am raising one. … I am committed to raising a badass little girl.”

When a fan asked during the Q and A what the panelists felt was the biggest issue of women’s rights today, Callies and Kreuk both referred to rape and sexual violence. Body image also came up as a key issue, with Nikki Reed (Twilight) noting that this is something women in the industry must deal with “on a greater scale than men do.” Callies said that not having to focus on body image is one of the great things about working on Walking Dead: “It’s hot and it’s sweaty and it’s gross and it’s liberating. … The show is the enemy of vanity.”

In contrast,  Kristin Bauer van Straten (True Blood) admitted that she would want a three-month warning before doing a nude scene so she could go to the gym more. Comments such as these, similar to those she made in 2010, gave credence to Callies’ claim that it’s difficult for women in the film business because “we are taught we ought to be thinner, younger, prettier.” But van Straten suggested that having to be so thin is a good thing, noting of True Blood that “we’re all much healthier for being on the show … we all work out a lot … we eat a lot more vegetables.” Though she did joke that “it’s all about vanity,” her comments were problematic, given that they promoted the idea that a female body is never good enough, requiring constant dieting, exercising and, as she joked, “a good spray tan.”

Lawless brought levity to the discussion by joking about having to use a “she-wee” on the oil rig and having to wear a merkin for Spartacis. She also emphasized she is a total fan girl of Sigourney Weaver and enthusiastically shared, “Have you noticed how much older women are reigning now on TV? I’m loving it.”

While older women are indeed reigning on TV, it would have been nice if more women of all ages had reigned at Comic-Con. Sadly, the women at the Con, whether real-live “booth babes” or illustrated characters, were far more sexualized and less clothed than their male counterparts. Thank goodness for the likes of Joss Whedon, who complained during the Dark Horse panel about the fact that he has been coming to Comic-Con for 10 years and has yet to find a woman hero statue that doesn’t look like a porn star. When he described the story of his career as depicting women who are not helpless, I was reminded of the “Zombie Dice” game I encountered on the Comic-Con floor, which included the characters “action hero” and “girlfriend.” When I asked the man demonstrating the game why the “girlfriend” couldn’t be a “action heroine,” he said “Oh, it gets worse … he has two brains and she only has one … but it’s OK because they save each other.” Too bad that the creator of this game didn’t take a page from Whedon’s book and create a woman with brains who didn’t need saving.

Here’s hoping that next year’s Con includes more strong women who are not only acting but also producing, writing and directing. And, who knows, maybe 2013 will be the year in which Whedon finally finds a non-pornified statue of a woman hero.

‘Freda’ Is the Film We Need Now