What Boy Scouts Can Learn from Girl Scouts - Ms. Magazine
Skip to content 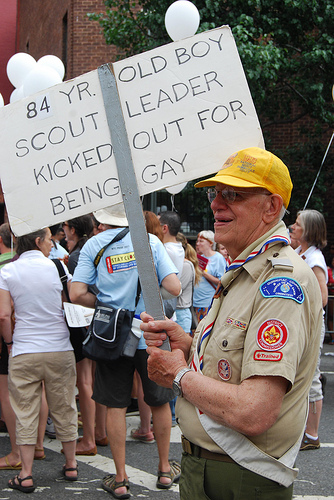 Though the Girl Scouts and Boy Scouts came from similar origins, they’ve had a century to grow apart ideologically. As far as inclusion and acceptance goes, Boy Scouts fall far behind the girls. In their latest throwback to a more prejudiced time, the Boy Scouts of America announced Tuesday that, after a secretive two-year review, it will continue a long-standing policy of discrimination against gay troop leaders and members. The BSA’s gay ban was legally protected by the U.S. Supreme Court in its 2000 decision Boy Scouts of America v. Dale.

The Boy Scouts could learn a thing or two from the Girl Scouts.

Last year, a Girl Scout troop in Colorado accepted a 7-year-old transgendered child, despite attacks (and a cookie boycott) from right-wing activists. Although the GSUSA’s official position [PDF] on sexual orientation is vague, they “do not discriminate on any basis” and don’t allow advocacy for any one lifestyle or sexual orientation.

The BSA isn’t just anti-gay; it has a religious bias as well. In the early ’90s, the organization banned atheists and agnostics because the Boy Scout pledge requires scouts to “do [their] duty to God.” In a May interview with the Sacramento Bee, BSA spokesperson Deron Smith made it clear that policy is still in effect:

Smith said that belief in God is a foundation of Boy Scouts and that ‘no one can reach their full potential without belief in a higher power.’ All members must abide by those principles, he said.

The GSUSA, on the other hand, allows girls to pledge “to serve God” or Buddha or Allah or no one at all. Though the official Scout oath includes the word God, a Girl Scout can substitute another word that fits her spiritual beliefs.

Such commitment to diversity opens the organization up to conservative criticism. Rep. Bob Morris (R-Fort Wayne) refused to support an Indiana House of Representatives resolution celebrating the 100th anniversary of the Girl Scouts earlier this year because of its “radical policies” that promote homosexuality and abortion.

For the 59 million American women who have participated in Girl Scouts, it’s gratifying to follow the organization’s progressive stance. In my troop, Troop 1139, we were a mix of races and religions. We didn’t discuss sexual orientation while we made song books, but I’m sure we would have welcomed anyone into our circle.

On the other hand, the official views of BSA haven’t evolved much since 1910–though Boy Scouts themselves probably have. A Scout who is trustworthy, loyal, helpful, friendly, courteous, kind, obedient, cheerful, thrifty, brave, clean and reverent (all required attributes, according to the Boy Scout Law) would certainly accept a gay or atheist person into his organization.

Indeed, there are grassroots groups that resist the Boy Scouts’ top leadership, such as Scouts for Equality–a group of Eagle Scouts committed to ending the ban on gays. Furthermore, two BSA executive board members have publicly denounced the ban and say they will try to end it from within the organization.

The core principles of Boy Scouts show its good intentions, and most members have had invaluable experiences in their troops. But the leadership, which has a strong partnership with the Mormon Church and other religious organizations, is clearly out of touch with modern society. We can only hope that in the next century of scouting, the Boy Scouts can earn a badge the Girl Scouts have already ironed on their sashes: one for acceptance.

During Roe’s Overturn, a Girl Scout Troop at the Capitol Got a Real Glimpse of U.S. Government Misogyny