Marissa Mayer is Not a Feminist - Ms. Magazine
Skip to content 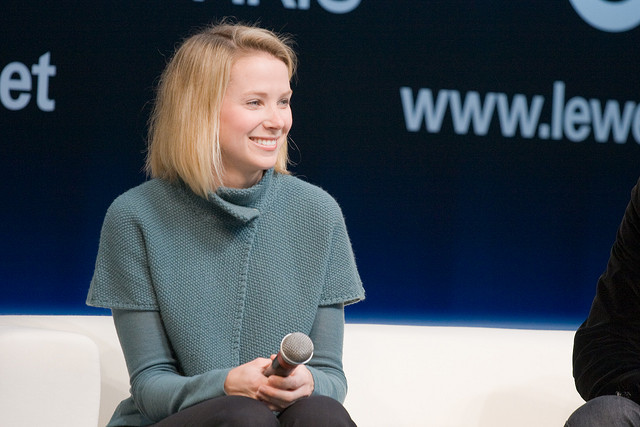 Yahoo’s new CEO Marissa Mayer told PBS’ Makers series that she doesn’t consider herself a feminist. Of course, what she probably fails to recognize is that we would not be referring to her as “Yahoo’s new CEO” right now if it weren’t for feminism.

In the interview, Mayer says that she believes that “women are just as capable,” and she believes “in equal rights” but that she thinks feminism is a “more negative word.” Of course, believing in “equal rights” for men and women but not being a feminist is like being an atheist who thinks the theory of evolution is hogwash. Them things just don’t mix.

We all have different ideas of what feminism really means—and that’s part of what makes it such a vibrant, fascinating movement. We’ll never really be done defining “feminism” nor should we be. We should always be improving, always be debating. But that being said, there are some tenets of feminism that are inextricably linked to it. And a belief that “women are just as capable” and deserve “equal rights” are among those.

If the stereotype of a feminist (I believe “militant” is the word Mayer used here) were really true, the feminist ranks would be far sparer. We’re not a cookie cutter group of gals; we’re not a stereotype. And it’s damaging statements like Mayer’s that perpetuate some of worst (and untrue) notions about who we are. Mayer professes to believe in the feminist tenets—but she doesn’t want to sit at our lunch table.

To denounce feminism—and I mean the clear-cut, dictionary definition of the word, the striving for equality between the sexes—because some sexist meanies made it seem “negative” is completely unnecessary. And we expected more from Mayer, a woman who has accomplished so much and broken so many barriers for women in tech.

Cross-posted with permission from The Jane Dough.