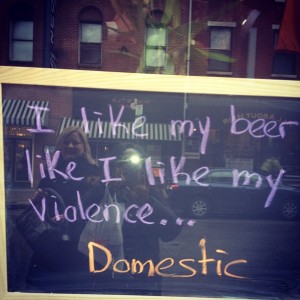 What’s up with the food industry trivializing domestic violence?

Last February, a passerby snapped a photo of a chalkboard (top) in the window of Smiths, a Philadelphia bar and restaurant that provides “friendly yet stellar service.” The not-so-friendly chalkboard read: “I like my beer like I like my violence … Domestic.”

A month later, Chops & Hops in Watkinsville, Ga., introduced a new item to their menu: a black and bleu [cheese] sandwich inspired by Chris Brown and Rihanna’s relationship. Encouraging customers to “put [their] hands on this … sandwich,” a post on the restaurant’s Facebook page reassured everyone that “Chris Brown won’t beat you up for eating this unless your name starts with a R and ends with A.” 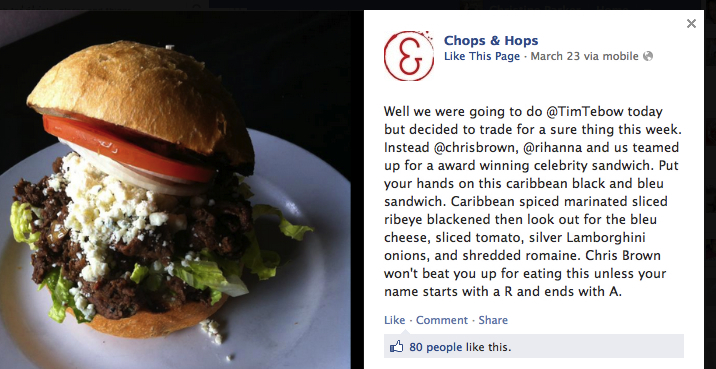 To make matters worse, Chef Richard Miley (the mastermind behind this daily special) revealed in an interview that he had no regrets. In fact, Miley took to the restaurant’s Facebook page in the days following to flippantly shift the onus onto the disapproving blogosphere, telling “all those so incredibly passionate about Domestic Violence to … [let] go of the keyboard and [volunteer] at a shelter.” 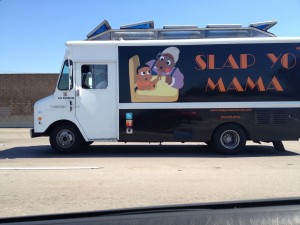 And just this month, I happened upon a Los Angeles-based food truck (left) emblazoned with the name “Slap Yo Mama.” The name was accompanied by a cartoon depiction of a woman with a red handprint on her cheek. The truck gets its name from a colloquial phrase popularized by the 2002 movie Friday After Next: “Tastes so good, make you wanna slap yo mama.” Though the expression does not have a formal definition, Urban Dictionary says it is derived from a situation in which someone discovers such delicious food that they become angry at their mother, whose cooking now pales in comparison—so angry, in fact, that they would slap her.

We’ve said it once and we’ll say it again: Domestic violence is not funny. Disturbing acts of abuse and assault happen to one in four American women throughout their lifetimes. Making light of this trivializes survivors’ experiences and reassures perpetrators that what they did was socially acceptable.

All I want when I go out to eat is a grilled cheese and a side of fries—hold the trivialization, please.