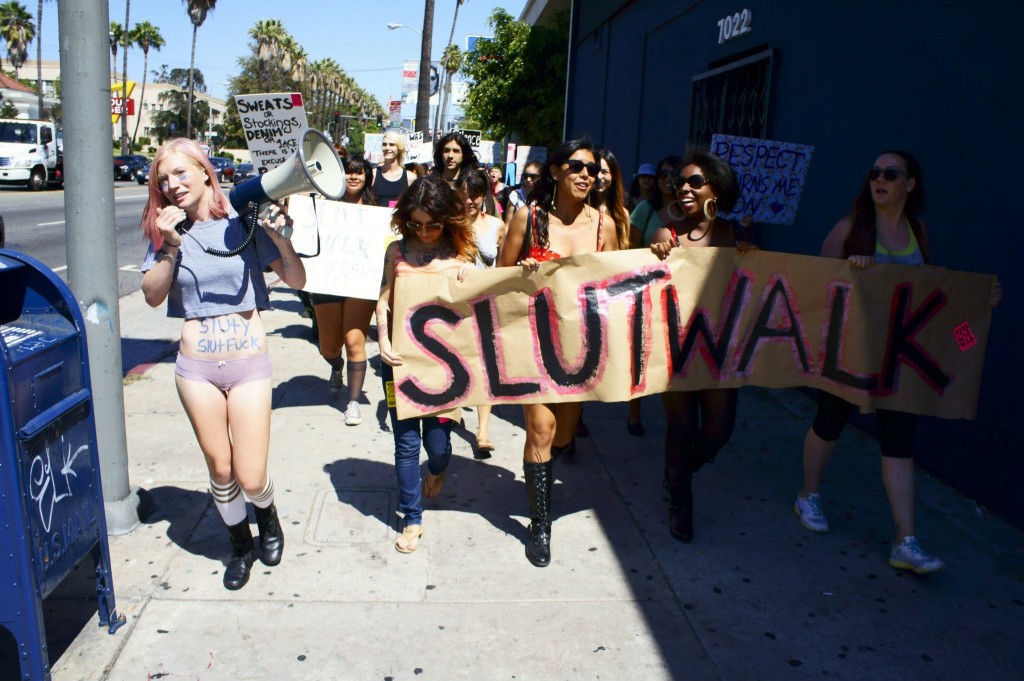 That was the question posed to a crowd Sunday afternoon crammed in a tiny studio space behind, of all places, the Chick-fil-A on Sunset Boulevard in Hollywood. Dressed in bras and underwear, fishnets and the occasional lace-up platform boot, we all had, according to comedian Luce Tomlin-Brenner, an air of slutitude. Add in the fact that most everyone raised their hand to liking sex—whether stoned, for pleasure or with more than one person—and it could not be disputed: We were completely, totally, 100 percent sluts.

SlutWalk LA, now in its second year, attracted around 400 women and men (and a child or two) to its march through L.A.’s tourist mecca, Hollywood Boulevard. Tour groups on double-decker Star Tours buses cheered and supporters honked as we turned the attention away from the costumed characters outside Grauman’s Chinese Theater

Politics were largely left out of this year’s Los Angeles event, replaced instead with a D.I.Y.-inspired message of owning your body, your sexuality and even your experiences. It’s that third wave-y feel—that individualistic empowerment—that has made SlutWalk popular among young women. Less emotionally intense than anti-rape rallies such as Take Back the Night, SlutWalk is more for spectacle, letting women openly express and redefine their sexuality, creating a safe space that just happens to be on one of the busiest strips in Los Angeles.

“If we share our stories, there will be a change,” said Jhoanna Salazar, who spoke prior to the march about the sexual abuse she experienced as a child from her stepfather. “Change has to happen.”

“I was raped and I didn’t call it that at the time. … It didn’t even register as a traumatic event. But, why not?” added speaker Anastasia Krylov. “These are things that happen to us, almost daily, that we just accept as part of the landscape of being a woman.”

There were other poignant messages as well, painted on signs and up and down arms and legs:

If I was asking for it, why couldn’t you?

Society teaches us don’t get raped instead of don’t rape.

Blame the system, not the victim!

SlutWalk has sparked much debate since its inception in Toronto in 2011. What started off as a well-intentioned response to a Toronto police officer telling women to avoid “dressing like sluts” in order to prevent sexual assault has now become, according to some critics, a movement with a muddled message. Some wonder if the word “slut” should be reclaimed or not. And as the FBI definition of rape changed from forcible to “penetration, no matter how slight … without consent from the victim,” the tales our mothers told us about rapists hiding in the shadows of alleys has come to be somewhat diminished: About 80 percent of sexual assaults are committed by someone the victim knows, ranging from acquaintances to significant others.

A tangible goal also seems to be lacking from the movement. Though created with the tagline “Because we’ve had enough,” we can question whether change truly happen from putting on a public show. Or should we spend our energy targeting aspects of the system? It’s still too early to determine whether or not national SlutWalk events have an impact on shifting the focus of rape culture from the victim to the system, or if it influences the collective consciousness at all. While I’m sure it raised awareness to the tourists walking the Hollywood Walk of Fame on Sunday, I was disheartened to hear, while I was leaving the event, a group of young men on bikes eager to race back to “check out the sluts.” Changing the greater societal perspective is still a ways off.

But for survivors (including myself), SlutWalk does create a supportive network. For the first time since my abuse, there was a liberation from the shame and insecurities that I have shouldered. While some there were reclaiming the word “slut,” I was finally shedding the word—used by my abuser—that had come to define me for years. SlutWalk’s message—and the idea of “slutitude”—might not be universal, but the telling and re-telling of our stories does bring about individual change. And the power of that change should not be doubted.