Serena and Venus Play for the Male Gaze - Ms. Magazine
Skip to content 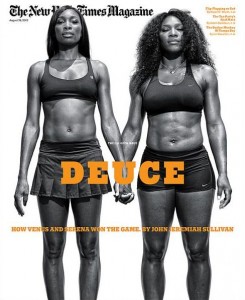 Don’t get me wrong. I’m happy that Serena and Venus Williams were on the cover (left) of The New York Times Magazine last week. Sure, I might have been happier if either of them were wearing a shirt, but with Serena’s 24-pack on display in its full muscular glory, I can see the shirtless argument.

What’s absurd, however, is the New York Times video “Sisters On Set,” which is running with the article online. By “On Set,” the videographer means on the photo shoot set, and indeed the entire three-minute video is a film (shot by a man) about a photographer (also a man) taking photos of the two heavily made-up athletes who are not playing tennis and wearing sports bras but no shirts.

Given the cleverness of The New York Times Magazine (the secondary mag article is about a fugitive monkey in Florida who may or may not be a metaphor for American libertarianism), you would think that this video is a parody about the male gaze. Unfortunately, it’s not.

Since I’d hate to increase the viewership of this video, here instead is a play-by-play of the shoot:

First 30 seconds– Shots of an empty tennis stadium in Miami. Soothing female voiceover talking about not Serena and Venus but Damon Winters, the man who shot the cover photo of the two athletes on a “sweltering day in July.”

:30–Venus picks up an adorable small dog and cradles it in her arms like a baby. She is joined by Serena, who stands quite close to her sister and the dogs. Both are shirtless.

:42–A different makeup stylist applies blush to Venus’s cheeks. She smiles as if she enjoys the experience of a stranger brushing tinted powder all over her face.

:55– Serena and Venus (still shirtless) walk down a hallway with their backs to the video camera. In the center background of the shot, viewers see the photographer taking photos of the two athletes from in front of them. They are sandwiched between two male gazes and a narrow hallway.

One minute mark–Adorable shots of Serena and Venus as children. Both are wearing shirts and seem to have no makeup on. No complaints here.

1:05– Once again adults, the two smush their faces close together and smile for the camera, gazing off into the distance as if in a Cover Girl commercial.

1:28– They hug again. Serena stretches her arms above her head and arches her back. Venus gazes longingly into her sister’s eyes.

1:30– Fan blows wind into their face so their hair waves in the breeze.

2:20– The two stand in front of a white screen, still shirtless, holding hands. The photographer takes photos of them. This shot ends up being the magazine’s cover.

2:30– Serena and Venus have–gasp–picked up tennis rackets. But instead of, you know, hitting balls over the net and engaging in the type of athletic activity that has made them two of the most celebrated athletes in history, instead they just circle each other with runway-model ferocity.

2:42–Outfit change! Venus is now wearing a shirt. Serena is still wearing only a sports bra, although this one is a pretty turquoise color.

2:43–TENNIS! They are playing tennis! They begin to lob the ball. It flies from one racket, to the next, to the–Cut! That’s it.

2:46– They come together to high five and gaze longingly into each other’s eyes.