When We Were Outlaws: An Interview with Jeanne Córdova - Ms. Magazine
Skip to content 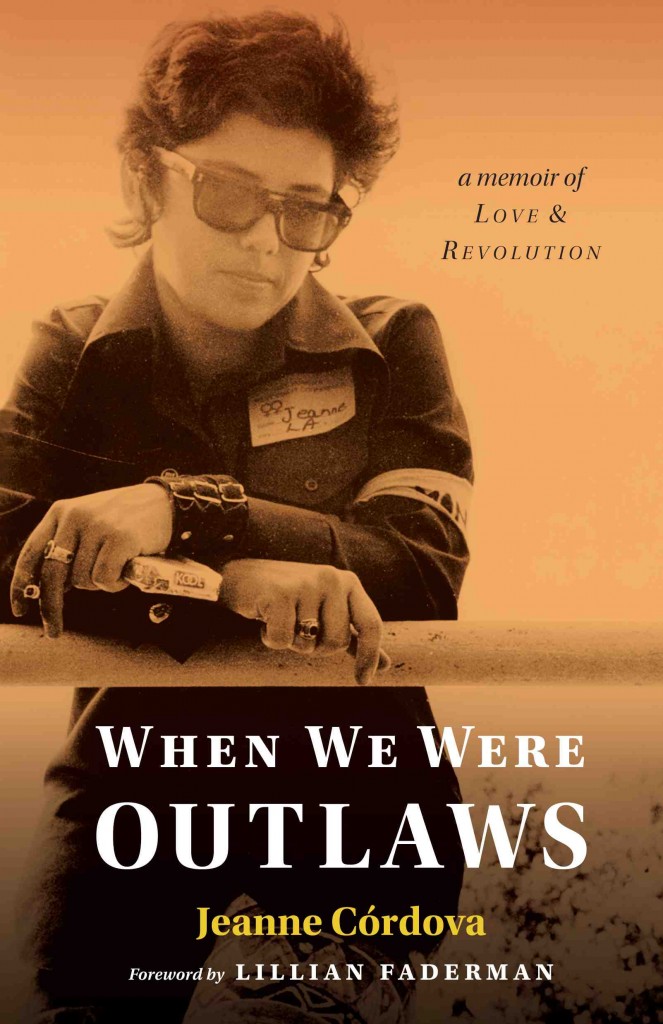 Lesbian-feminist movement pioneer Jeanne Córdova has been fabulous for a long time, organizing, agitating, publishing, speaking out. At last, we can get to know her better in her new book, When We Were Outlaws: A Memoir of Love & Revolution, which garnered a Lammy, a Goldie and a Triangle, making it a triple-crown winner for lesbian writing. The awards and the reviews (here, here and here) all suggest the same thing: This is a riveting ride of a fabulous book.

In the mid-1970s, Córdova was burning up Los Angeles with the force of her passion, for women and for social justice. When a leader was needed, Córdova was there to lead. But her memoir makes it clear that leading isn’t easy; there are no easy answers. She had to struggle and suffer, and she bravely recounts her failures along with her achievements. And what better vehicle than a red Cougar could drive this story? Córdova called her car Lionheart, and the name matches her own courageous heart, in both public and private spheres.

These days, Córdova leads a pack of guerilla cultural activists, LEX: The Lesbian Exploratorium, creating political, art and history happenings around Los Angeles. I slowed her down a moment for a quick interview.

Ms. Blog: As a teenager in rural New Jersey, it was a small miracle that, around 1973, I found Jill Johnston’s book Lesbian Nation. In that moment, just reading the title, walls came crashing down around me and inside me. Meanwhile, you were publishing the magazine The Lesbian Tide in Los Angeles. How did you feel about the dangerous word “lesbian” then, and how do you feel about it now?

Jeanne Córdova: I never felt the word lesbian was dangerous. Perhaps I was naive at 19 when I found the word, but to me it was like discovering the Enlightenment. It relieved so much of the pain of my high school and college years. 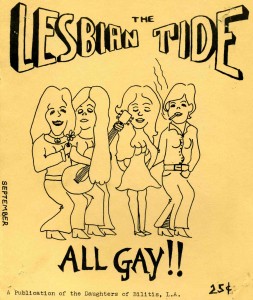 When did you first get the idea and title for The Lesbian Tide?

It was in the summer of 1971. The first editorial board was sitting around a coffee table in my living room brainstorming ideas because we were going independent from calling ourselves The L.A. Daughters of Bilitis Newsletter. Early on we decided that we wanted to actually use the word lesbian in the title because we were so proud of who we were. We wanted to scream it from the mountain tops! We wanted to smoke out everyone else who loved or was afraid of the word.

What were your hopes, and what struggles and satisfactions did you have with The Lesbian Tide?

As the first of my many political children, The Lesbian Tide exceeded our hopes that we wanted to build a national lesbian publication that would reflect the fact that we were a national community. Not just a small group in L.A., or NYC cells of activists. Our biggest struggle was to find the money to pay for the printing bill each issue. Everything else was donated.

In her review of Outlaws, Jean Roberta writes, “Córdova (as she was called) appears in this memoir as a remarkable mixture of naivete, clear-sightedness and community spirit.” I was impressed by the essential, uncorrupted sweetness and empathy of the Córdova persona in your memoir, and your ferocious drive to focus on truth, fairness,and equality. Where did your powerful community spirit come from? Was it from your background of communities, the Córdova siblings, religious sisterhood, feminist collectives, butch voices?

I think I was born with a deep sense of how much power a collective or tribe of people innately had by reason of their tribal bond. True, I was born into a tribe of eleven siblings. We really raised each other. Then I went into the collective of nuns. This was my first experience with “sisterhood.” Living in a community of women dedicated to a larger goal outside of ourselves seemed to me an ideal way to live. Then I experienced life in the lesbian bars of the late ’60s. By the time I found the feminist movement, at the age of 22, I already knew that building and living in community was a powerful tool to overcome problems in one’s personal and political life. 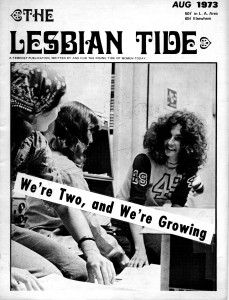 Your political mentor was a man, Morris Kight, and your spiritual teacher is a man, writer Michael Ventura. From your lesbian-feminist-butch perspective, how do you feel about men? How has your feeling about men changed over the years?

Yes, these two men were anomalies in my life spent mostly with women. As a boomer, my male-age mates were a conspicuously sexist group. They were raised like the men in Mad Men, the TV show. They believed women were not equal to men. They were a difficult lot to do political work with. They were always assuming things, like, of course, the president of the group had to be male, or “the women” would take care of bringing snacks and drinks to meetings. Just getting them to refer to us as “women” rather than “girls” seemed a momentous shift in the way they thought about us. To them it was “the men and the girls.” So for a long time we called them “the boys”—never men. Then they got the picture. My current feelings about men have changed as the next two generations of men has changed. Now, when I am working politically with young gay men, they are not innately sexist. They tend to automatically see women, or us “girls,” as partners in equality. So they are much easier to work with and be friends with because partnership with women is now something they understand and even assume.