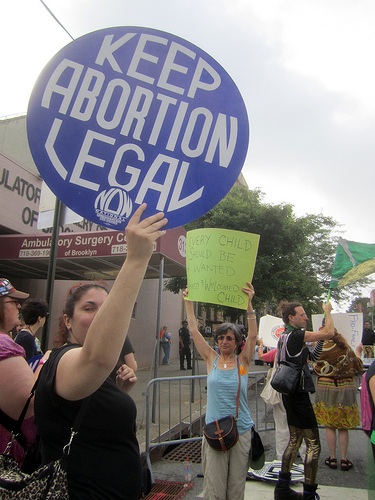 Each year, 67,000 women die throughout the world due to complications from botched abortions. This number makes up a damning 13 percent of maternal deaths–deaths that could have been easily prevented if these women had access to safe abortions.

Instead, these women were cornered into more desperate methods, with the tragic end result of more than 220,000 children losing their mothers every year. Of those unsafe abortions, 98 percent occur in developing countries, which makes women there in particular need of accessible abortion care and counseling.

The Global Day of Action for Access to Safe and Legal Abortions was started with the intention of recording the actions organizations take to defend abortion rights and of equipping future activists. It started off in Latin America, born of a decades-long movement across the region to decriminalize and end stigmatization of abortions. The date was picked as a nod to the September 28th date of Brazil’s abolition of slavery.

Though reproductive rights in the U.S. are constantly under fire, our counterparts in developing nations fare much worse. With the War on Women we’re tirelessly fighting against here (1,100 state bills to restrict access to reproductive health were filed in 2011 alone), it can be forgotten that reproductive rights need to be a global venture.

In many countries, and in the pre-Roe U.S., bans and restrictions on abortions forced women to resort to unregulated providers for secret, unsafe procedures. These shoddy operations could fatally injure women though carelessness or incompetence, or leave them with permanent injury or infertility.

Guaranteed access to legal, safe abortions in these countries will save women’s lives. On top of that, studies have shown that increased access to abortions actually leads to fewer abortions, since abortion access usually goes hand-in-hand with better access to contraceptives and sex education.

When women in developing countries have no clinics to seek out, they will try to perform abortions themselves [pdf] by ingesting poisonous chemicals, inserting tools into the cervix or forcing abdominal trauma. The results of these attempts can be horrific and deadly.

In the U.S., a third of women live in one of the 87 percent of counties that have no abortion provider. This, combined with the mandatory waiting periods that are active in 24 states, can make it extremely difficult to get a legal abortion–especially in states like Mississippi where there is now only one abortion clinic.

Since President Obama repealed the Global Gag Rule in 2009, which prohibited NGOs receiving U.S. assistance from providing abortion services or counseling, the flow of foreign aid towards safe abortions and contraceptives has increased. However, we still have miles to go before we sleep when it comes to ensuring governments recognize reproductive rights as a health issue, not a political one.