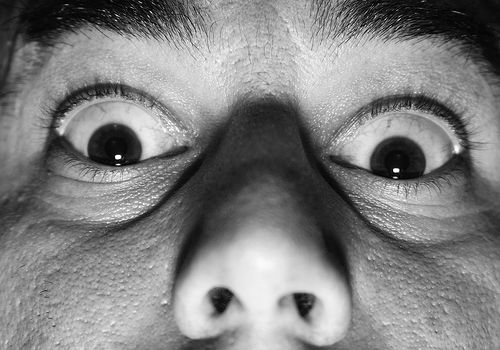 Monsters in movies are us, always us, one way or the other. …

My love of horror movies is a product of both nature and of nurture. My mother loves them. My older brother says I ended up in theaters as a child watching movies that were definitely not rated for my age group because he convinced Mom, who already wanted to go anyway, that we could handle it. We could, too–despite some interesting nightmares, we didn’t turn into serial killers or become permanently scarred psychologically. Unless you consider our desire to have the crap scared out of us by a good horror movie scarred.

Horror movies provide direct access to what Aristotle called catharsis: the release or balancing of pity and fear. They work directly on the deepest reptile parts of our brains to evoke and then resolve fear. Good horror movies also use plot and characters to draw the audience in on an empathetic level, so that where there is pity there is more fear. And all horror movies contain tropes that can tell us about the deepest fears of the society out of which they come.

As an adult, I watch horror movies as what Princeton University professor Jill Dolan calls a “feminist spectator,” which means that I look at what they tell us about how our culture thinks and feels. Recent horror movies focused on families and children, adolescent women and single women reveal an unsettling persistence of patriarchal norms. (But, then again, horror is supposed to be unsettling, no?). They also suggest that changing family structures–even when change is for the better–can scare the bejeezus out of us.

If you are looking for a good scare this Halloween season, cast your feminist eye on this recent rash of family-centered horror movies in which inattentive fathers leave their children vulnerable to being taken by aliens, monsters and demons.

The Possession, currently in theaters, centers on the character of Clyde (Jeffrey Dean Morgan), whose job distracts him from attending to the needs of his daughters in the aftermath of his divorce from their mother, Stephanie (Kyra Sedgwick). He’s so distracted, in fact, that his youngest manages to get herself infected with a Dybbuk. This pre-pubescent girl, who’s in possession of a symbolic “open box,” “ring,” and “thing growing inside her,” speaks to our lingering cultural discomfort with women becoming sexually active before marriage. The takeaway message: No matter the presence or skill of the mother, children can never be safe without their biological fathers around.

In Super 8 (2011), it takes an alien invasion to get distracted father Jackson Lamb (Kyle Chandler) to engage with his son. The mother in this family is out of the picture before the movie even begins: She died in a work-related accident. Literally, the consequence of her working outside of the home was death. Though both father and son are struggling with the loss, Lamb cannot connect with his son until the child’s life is threatened. That the alien has to take the son’s only remaining connection to his mother–a necklace–before it can cease threatening this community speaks to an underlying belief that mothers are expendable and replaceable; fathers are here to stay.

Finally, if you’ve seen Guillermo del Toro’s Pan’s Labyrinth, you will recognize his trademark trope of turning real childhood fears into metaphorical monsters in Don’t Be Afraid of the Dark (2010). The central child of this movie, Sally, has been sent by her mother to live with her disinterested father Alex (Guy Pearce) and his new wife Kim (Katie Holmes). Kim is perfectly clear with her husband that she would not have chosen motherhood at this moment in her life and that she expects him to step up as a father. But, busy with his career, he doesn’t, and Sally’s fear that neither her father nor mother loves her, made manifest by the tiny-but-terrifying creatures that live under the house, threatens to overcome her. Ultimately, it’s up to the only potential mother around, Kim, to do what she can to protect the child–although the consequences of her of taking on this role are dire. The ideology is clear, if not feminist: A mother can be a martyr, but only a father can be a hero.

Stay tuned for more recommendations on how to watch horror movies as a feminist spectator. Who knows, I may even uncover one that is actually feminist. Suggestions welcome!

Photo from Flickr user MamboZ under license from Creative Commons 2.0