Where Are the Global Girl Activists? Don't Ask - Ms. Magazine
Skip to content 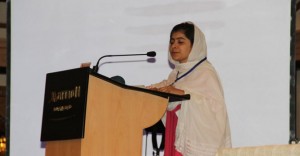 Where are the young women in the fight for global women’s rights?

Don’t ask me this stupid question today. Most days I could calmly and politely explain to you where and how young women are doing this work. How it looks different than it did before, that the keywords are different and much of the work is being done online as well as offline. But calm and polite is not something I can muster today.

Because today the answer is this: The young women in the fight for global women’s rights are being shot in the head in Pakistan for fighting for girls’ right to education.

Malala Yousafzai is 14 years old. When she was 11, the private girls school owned by her father was forced to close, along with all other schools for girls in Swat, Pakistan, at the order of the Taliban.

Malala and her family knew the danger of defying the ban–as troops rolled in to enforce it, other families fled the violence in hopes of finding peace and educational opportunities for their whole families. But Malala’s family was determined to stay and fight for their school and their community.

Malala was also determined to speak out against the ban. At just 11, she began writing an anonymous blog for the BBC about the conditions in Swat and the girls’ determination to resume their education. In that diary, she wrote of continuing her education in her bedroom and of nightmares she had about Taliban fighters coming to kill her and her family. At the time she wrote of her activism,

I started asking why girls were denied their basic right to education. Why were (the) Taliban hurting innocent people and how my friends and I wished to attend school to grow in life?

By the time she was 13, Malala had been featured in two New York Times documentaries about the battle for girls education in Pakistan. She was nominated for the International Children’s Peace Prize and was honored with the Pakistan National Peace Prize. A school was named after her. No longer anonymous, she publicly called on girls and their families to return to school. And she broadened her activism to include advocating for freedom from the Taliban and peace in her nation.

This morning the Taliban claimed responsibility for shooting Malala in the head and neck on a school bus as she returned home from school. When the gunman boarded the bus and asked which girl was her, the other students tried to protect her. He shot two other girls for their defiance. The Taliban official said Malala’s assassination had been in the works for over a year.

This morning, Malala is fighting for her life in a hospital in Pakistan because she spoke out when she saw an injustice. This morning, of all mornings, during the week of the International Day of the Girl. And this morning, people will still be asking where girls are in the fight for global women’s rights.

Photo of Malala Yousafzai. Article crossposted from The Ms. Education of Shelby Knox