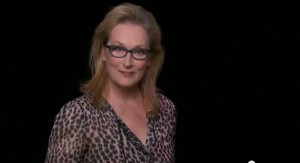 CRR plans to “deliver a thundering statement–backed by hundreds of thousands of signatures from concerned citizens like you” to the congress and the president emphasizing the need to protect reproductive rights as basic human rights.

The campaign’s long string of celebrity support can only help the cause. After all, as one Youtube commenter noted, “No one can say ‘no’ to Meryl Streep. Problem solved.”

Screenshot of Meryl Streep from ReproductiveRight100.