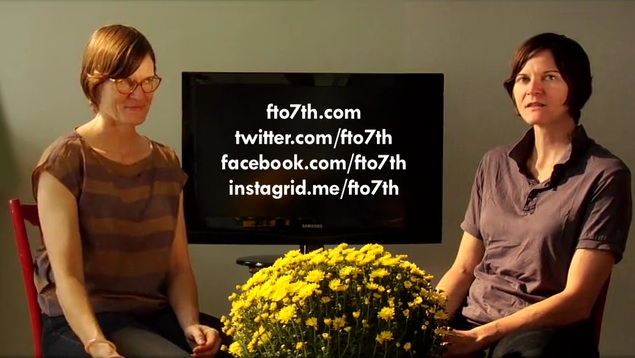 What good is laughing? We’re engaged in a tremendous battle for women’s rights; what’s so funny?

I get my laughs from Ingrid Jungermann, a comic genius who created a popular lesbian video series called The Slope. Now she’s doing a Kickstarter campaign to fund a spin-off series, called F to 7th. If the funds aren’t raised in time, by November 1, the show won’t be made, which would be really disappointing.

I got together with Ingrid, virtually, and asked her a few questions.

What does “F to 7th” mean? Your Kickstarter video is called “Somewhere Between FTM and PSP.” Could you spell that out too?

It’s my train stop in Park Slope [Brooklyn], plus I wanted to play with trans talk. Which connects to what “somewhere between Female To Male and Park Slope Parents” means. Even though a long time ago I came out as a lesbian, I’ve never liked any of the words for my sexuality. Queer is closest, I guess, but that’s something really old gays or really new gays say. “Lesbian” sounds like an STD. “Dyke” makes my whole body go into a rage; it doesn’t make me feel like I’m “taking back” anything. I’m not trans, but I think the trans movement is really cool. So, I decided F to 7th was good because it’s just where I live. How do I identify? By my address.

What happened with your first series, The Slope, and your co-creator, Desiree Akhavan? Why the change in title?

Desiree and I split [as a couple] before Season Two, so it was really challenging to collaborate after that. Desiree ended up making the last four episodes, and then recently I decided I wanted to do a new season. Since she’s not involved this time, renaming it felt like closure and a fresh start. I’m sure people will miss Desiree this season. She’s talented and funny and you can’t replace her, so I’m not even going to try. I’m just doubling up on me. I even go out on a date with myself in one episode.

The Slope was about “superficial, homophobic lesbians.” What is F to 7th about, and how is it different? Can you give us a preview of some of the characters and plots?

F to 7th is about the identity of an individual rather than a couple. I’m really interested in internalized homo- and transphobia because most of us are so programmed to feel that who we are, at our core, is flawed. I still struggle with wondering if my sexuality is a curse, and I came out when I was 18. I like making all these dark issues into comedy. It releases the pressure. Makes everything less threatening. The new episodes deal a lot with gender and how silly we all are for taking sides and promoting types. With each character in every episode, I attempt to show that there’s a pecking order of power: You always have someone above judging you and someone below who you judge.

In your Kickstarter video, the expression on the face of the character on the right side of the screen in the final shot is priceless. I’ve seen that expression in interviews before, after all the laughing, when that taste of hopeless, empty falsity is exposed, when the person forgets for a moment that the cameras are still rolling, or can’t help but show a sad vulnerability. You’re a genius at subtle expressiveness, with both your face and words. Where do you find your inspiration?

Oh gosh, what a compliment. Weirdly enough, I’m more comfortable in front of a camera or a large crowd than in small groups or one-on-one. I don’t know why. One-on-one, I have to pick the coolest part of me which is still not very cool. Inspiration? Great acting turns me on. I get lost in it. Specifically, the two things that have really inspired me lately are Michael Haneke‘s anything and Joaquin Phoenix’s performance in The Master. Sometimes I’ll read poems by Sharon Olds or puns by Dorothy Parker. Female comedians with a knack for physical comedy like Amy Sedaris, Molly Shannon or Kristen Wiig. Growing up, I loved Carol Kane, Bernadette Peters, Madeline Kahn, Goldie Hawn. Obviously, I don’t know where to start or end this question. I just love talented performers who take me on a ride.