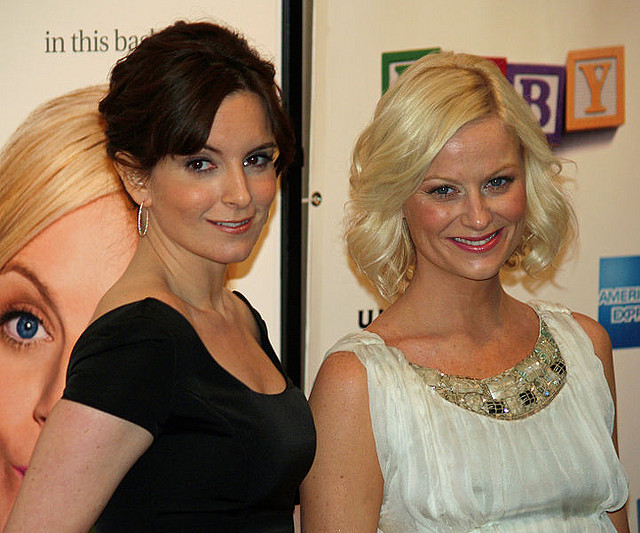 Following Monday’s announcement that Tina Fey (30 Rock) and Amy Poehler (Parks and Recreation) will jointly host the Golden Globe awards January 13, women and men alike were giddy at the prospect.

This is the first time the Globes have been hosted by two women, and the fact that it is these two women–two of the most beloved comic actors in the country–makes the prospect that much more delightful. (And perhaps a relief after Ricky Gervais, who has, in the words of Liz Smith, “terrorized those seated at the GGs for the past couple of years.”)

“We’re already dreaming up what we hope is a three-hour session of witty tidbits and revivals of their classic Saturday Night Live sketches,” writes Vanessa Golembewski for Refinery29, describing the funny women’s potential antics as “warm, fuzzy hugs wrapped around our souls.”

Fans have also taken to Twitter to voice their passion. Search the hashtag  #goldenglobes and you’ll find “Awesomeness times a million,” “Tina Fey + Amy Poehler= swoon” and “IT’S GONNA BE THE BEST #GOLDENGLOBES EVER!”  Jarett Wieselman tweets that Fey and Poehler hosting is “quite possibly the best idea, ever!” TV critic Ryan McGee takes a more sardonic approach to his appreciation: “NO RICKY GERVAIS? Oh wait. I’m totally OK with that.”

We can’t wait to see Tina and Amy bring the magic this January! I believe Jezebel’s Laura Beck best sums up our thoughts here: “ALKSJ+_+_ADOAJ!!!!???JLASJDAH&&***WINGBATWOOOOO!!!!”