A Feminist Guide to Horror Movies, Part Two: It's Not Just About Vampires - Ms. Magazine
Skip to content 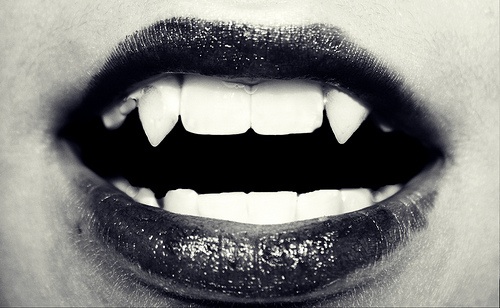 This piece is part two in a series. See here for part one.

Since Edward Cullen first graced the pages of a young adult novel in 2005, vampires have been the sexy bad guys du jour. But it’s not just the lingering fear that sex might lead to death that makes these nightmarish manifestations of sexual desire resonate with audiences.

Gothic horror literature–which attracts audiences by allowing them to vicariously transgress sexual and social norms while also reinforcing the punishments that come with such transgressions–is a goldmine for contemporary filmmakers interested in exploring the sexuality of adolescent women. For example, the 2011 film The Moth Diaries, based on the 2002 young adult novel by Rachel Klein (who wrote the screenplay) and directed by Mary Harron, harkens purposefully back to the first vampire novel, Joseph Sheridan le Fanu’s Carmilla, and does little to counter the lesbian exploitation premise of either book. Intimacy between girlfriends–including one hanging out in a nightgown while the other bathes–is bathed in soft light, but two women having sex is a bloody, messy activity that leads to death. The movie also uses the Gothic trope of an innocent woman trapped by a sinister figure within a decaying castle  to great effect: The architecture of the girls’ boarding school creates most of the danger, and the only male figure around is clearly untrustworthy. (Spoiler alert) The heroine triumphs. But this movie is even more sex-shamey than Twilight.

I am looking forward to Diablo Cody writing her horror movie about going to Catholic school, because in Juno she tenderly treats the ambivalent attitude towards teenage sex that she must have learned in that school. But in Jennifer’s Body (2009), directed by Karyn Kusama, Cody turns teenage sex into a nightmare. The small town of Devil’s Kettle serves the function of castle-in-a-remote-wasteland-imprisoning-young-women, where one of the women breaks free only by virtue of the death of the other. A lesbian kiss that wasn’t in the original script makes this film more exploitative than Cody may have intended it to be, but, like The Moth Diaries, Jennifer’s Body cautions us against trusting female sexuality.

In these two movies, the heroines conspicuously lack father figures, but typical Gothic heroines find themselves at the mercy of the very men they are called upon to trust. Silent House (2011), co-written and co-directed by Laura Lau, returns to the idea that patriarchal authority figures–even within our own families–might be the men who pose the most danger. The plot centers again around the house-as-prison metaphor: Sarah, played by Elizabeth Olsen (the far more talented younger sister of Mary-Kate and Ashley), becomes trapped in her family’s decrepit shoreline house with a sinister figure she assumes to be a homeless squatter. Reflecting the ambivalence with which our culture regards women’s place in the home, the film uses an ancient, secret tragedy to raise questions about whether the heroine is in real danger or is tricked by a tortured mind into believing so.

Gothic novels often dwell upon the fear that the sins of the fathers will be visited on their children. The House at the End of the Street, in theaters now, features  a young man ostracized from his community because of his family. The fatherless woman hero (played by The Hunger Games‘ Jennifer Lawrence), shuns the cool kids and instead pursues this mesmerizing-but-off-kilter boy-next-door. Despite her mother’s attempts to protect her, she finds herself drawn into the characteristic Gothic hallways and secret chambers that contain the enigmatic ancient tragedy from which the boy has yet to recover. Sure enough, her instinctual sexual attraction is offered to titillate the audience, then is violently shut down.

With a little Gothic ambivalence, a feminist can at least enjoy watching the female heroes of these films defend themselves, but not without shedding a little blood. And The Moth Diaries, Jennifer’s Body, and Silent House are all written and directed by women. Perhaps that is why the decrepit hallways, doorways and secret rooms of these Gothic environments betray a cultural attitude that the patriarchy, though still in place, may not actually be good for women, and that isolating them from society might not keep them safe.