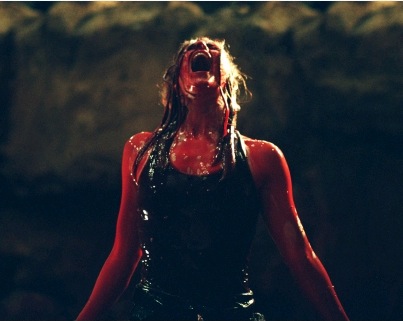 This is the last in a three-part series on watching horror movies as a feminist spectator.

Having covered films which reinforce the necessity of the patriarchy, and films which question its value while still punishing challenges to patriarchal norms, let’s look at two movies in which the patriarchy is almost entirely irrelevant.

British director Neil Marshall’s 2005 film The Descent is the most terrifying movie I have ever seen. Claustrophobes beware: The first half of this movie contains the scariest spelunking you’ll ever see on film, and that’s nothing compared to the ravenous underground creatures that appear in the second half–who may have been human once but evolved over centuries to suit their environment by having no sight but super hearing and smell. I think what scares me most about this film, though, is how perfectly it symbolizes the challenges faced by women who refuse to conform to feminine norms.

The film focuses on a group of professional women with a history of adventuring together who meet up in the Appalachian Mountains for a caving expedition. When things go awry, we learn that the leader of the group tricked her friends into entering an uncharted cave, and they are stuck without anyone in the outside world knowing where they are. And, oh yeah, there are monsters: agile, violent creatures that seem to emerge from the grief-stricken subconscious of the main character. The message is pretty clear: Hamstring your women friends and be prepared to be hamstrung yourself (and I mean that literally.) This movie is not about the triumph of the heroine but is rather a gruesome and vivid representation of the double bind: Never has being stuck between a rock and a hard place become so terrifyingly real. Check out Marshall’s film Dog Soldiers for a similar treatment of masculinity.

Though it was shot in 2006, Case 39, featuring Renée Zellweger and Bradley Cooper, was not released in the U.S. until 2010. (Never a good sign, and not surprisingly it got poor reviews.)

Zellweger’s character, Emily, a social worker, begins the movie by telling a moony Doug (Bradley Cooper) that, although she likes him, she’s just too devoted to her job to have a relationship. She takes on an extra case at work and becomes convinced that the new girl under her care, Lilith, is in danger. Emily saves Lilith’s life and attempts to place her in a foster home. When Lilith asks Emily to be her mommy, Emily replies, “I’m just not mom material.” But the persuasive demon child soon finds her way into Emily’s home, and from there things don’t go so well for Emily or for anyone around her. The movie ends with Emily driving her car–with Lilith in it–into a lake and leaving the child, transformed in its last moment into the primordial creature it really is, to drown.

I haven’t had a chance to see two currently playing horror films, Sinister and Silent Hill: Revelation 3D, but from their previews it would appear that they have a great deal to say about fathers, adolescent girls and the ancient curse that is the patriarchy. Some critics are claiming that “horror films have hit a new golden age.” If so, I hope to see more films in which women–win or lose–are free to fight their own battles.

Photo of Shauna Macdonald in The Descent