"By the Way, We Have to Fix That" - Ms. Magazine
Skip to content 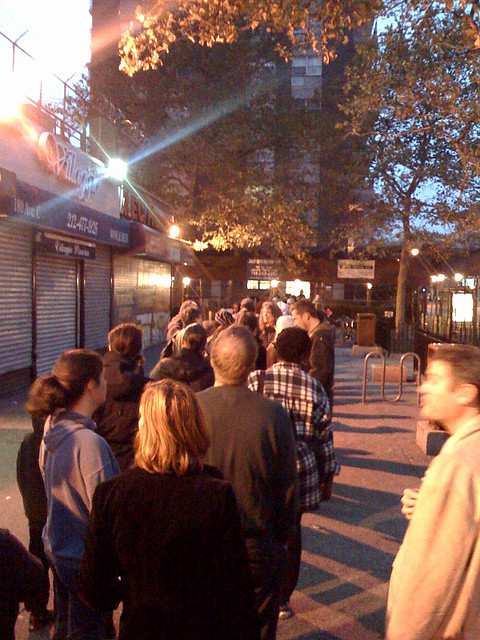 In his acceptance speech last Tuesday evening, President Barack Obama began by thanking every American who participated in his reelection, “whether you voted for the very first time, or waited in line for a very long time.” Then, after a brief pause, he thoughtfully noted, “By the way, we have to fix that.”

Yes indeed. Problems were encountered at various polling locations across the country, including ridiculously long waits to vote. On her show the following evening, Rachel Maddow cited voting complications in city after city: In Chicago, registered voters were sent to multiple polling places and given the wrong ballots; in Detroit, a woman arrived at her polling location at 5 am only to discover that 200 people were already waiting, and in Pennsylvania one man filled in his support for Barack Obama and then watched helplessly as the machine cast his vote for Mitt Romney. In Ohio, problems arose with provisional ballots after Secretary of State Jon Husted required voters to record their form of identification on their ballots (rather than having poll workers do so).

Dubbed the “stay in line” election, Tuesday’s vote was plagued by long lines in nearly every battleground state, including Ohio, Indiana, Virginia, Maryland, North Carolina, Nevada and, most notably, Florida. In the latter state, early voting days were reduced by half, which shortened the amount of time available to vote and forced long waits. The Atlantic reported that the Sunday before election day (the last day to vote early in Palm Beach County), the last voter was finally able to cast a ballot at 2:30 Monday morning, meaning that that the person had been waiting more than seven hours.

Do these incidents merely demonstrate poor planning at state-level, or are they horrifying examples of voter suppression? Rick Hasen, professor of law at U.C. Irvine and election law aficionado, argues the latter. When Maddow asked him “why the lines were so damn long” this election, Hasen replied:

Well, some of the reason is because there was a deliberate effort in Ohio and Florida and other places, mostly with Republican legislatures, to cut back on the number of days and hours of early voting. This was, you know, I think seen as a way of depressing the Democratic turnout. And I don’t know if it had that effect; people seemed to stay in line for a long time, but it certainly seemed to be intended to make it harder for people to vote.

The Atlantic’s Andrew Cohen agreed with Hasen, arguing that the decision by lawmakers to cut back the number of early voting days was part of a partisan design to keep Democratic voters from casting their ballots. It’s no secret that increased voting opportunities such as early voting days particularly benefit minorities, low-income Americans and students–exactly the groups the GOP would like to see less of in elections, so serious problems arise when lawmakers try and reduce voting opportunities without explanation. In Florida, where Gov. Rick Scott cut the number of early voting days from 14 to eight, the rule was challenged under the Voting Rights Act because it appeared to unfairly target minority voters. A federal court then ruled that Scott’s decision could not be implemented because minorities “will be disproportionately affected by the changes in early voting procedures because they disproportionately use early in-person voting.”

Unfortunately, Cohen noted, only five of Florida’s 67 counties are protected under the Voting Rights Act, and therefore the remaining 62 counties were robbed of six voting days (amazingly, the Supreme Court decided on Friday to review Section 5 of the Voting Rights Act despite the fact that it was clearly instrumental in fighting voter suppression this election). Similarly, when Ohio Sec. of State Husted attempted to curtail early voting three days before the election, the Supreme Court rejected his appeal and voters were still able to cast their ballots the weekend and Monday before the election. But voting hours were still cut back, with Ohio voters having only 16 hours to vote on those days (by contrast, voters in some Ohio counties had up to 24 hours to vote over that same three-day period prior to election day in 2008).

So after the headache surrounding the 2012 voting process, will there be a movement to change the way elections are run here in the United States?

Hasen offers several ideas to help ensure that voting snafus aren’t repeated. “Congress can do a lot more than you might think,” he argues, “because the Constitutions give Congress the power to set the rules for congressional elections.” For example, Congress could provide monetary incentives for states to provide early voting and could mandate which voting machines are used. On a larger scale, Congress could create a nonpartisan agency to administer national elections.

“That’s what I’d like to see,” says Hasen. “Let the federal government take over all voter registration and register every voter. … We could do what most mature democracies do, which is have a national election administration that’s nonpartisan and professional.”In the U.S., election officials are often chosen based on their party affiliation, which opens them up to the temptation of making decisions intended to curtail opposition votes.

Complementing Hasen’s suggestions, Brad Plumer of the Washington Post outlined a series of steps  to establish a more efficient voting system and abolish long lines for good. In addition to ideas such as modernizing voter registration, expanding early voting and ensuring that polling booths are well-equipped and functioning, Plumer suggests reforming the Election Assistance Commission (EAC). The EAC was originally charged with making sure all state elections were in compliance with the Help America Vote Act (HAVA) of 2002, ironically signed into law by President George W. Bush following the controversy surrounding the 2000 election.

Senate Republicans have nonetheless blocked commissioners from sitting on the EAC, rendering it ineffective. However, if implemented properly, the EAC would provide voters with information such as where and how they can vote. It would additionally administer federal funding to states to help them meet HAVA requirements and develop election-related technology. Plumer believes that a functioning EAC may have assisted states such as New York and New Jersey when they struggled to develop a last-minute backup voting plan following Hurricane Sandy.

Though voting laws may be the province of federal and state governments, we all need to be aware of our voting rights so that we know when they’re being infringed up. Much as how black voters were especially motivated to vote knowing that politicians were trying to limit their ability to do so, we should use this election’s horror stories as incentive to push for a system in which we need not worry about state officials trying to silence any of us.

Photo of a lengthy line at 6:00 AM on election day via Flirkr user dpstyles licensed under Creative Commons 2.0.