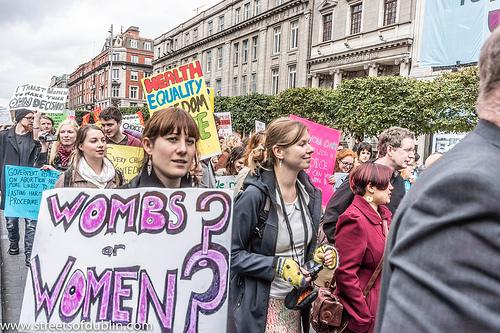 Feminists and pro-choice politicians are calling for an urgent revamp of Irish abortion law after the death of Savita Halappanavar, a 31-year-old dentist who died in the Republic of Ireland after doctors refused to terminate her pregnancy. Halappanavar went to University Hospital Galway on October 21 and was found to be miscarrying, but doctors refused to induce an abortion as long as a fetal heartbeat was present.

Halappanavar’s husband, Praveen, claims his wife requested an abortion several times but was told, “This is a Catholic country.” She spent several days “in agony” before the fetal heartbeat stopped and doctors removed the dead fetus, and then died in the intensive care unit of the hospital from septicemia. Investigations into Halappanavar’s death will now be held by Ireland’s health executive and by the hospital itself.

Abortion law in the Republic of Ireland last came under international scrutiny when the European Court of Human Rights (ECHR) ruled that the law violated the rights of a woman forced to travel to England to obtain an abortion. The court stated that the woman’s treatment violated her right to a private and family life–similar to the legal basis for Roe v. Wade. However, no changes have been implemented in Irish abortion law since the 2010 ruling, and it appears that legislators’ slowness to act has now claimed its first victim.

Even though the Irish Medical Council states that abortion may be performed if “there is real and substantial risk to the life (as distinct from the health) of the mother,” the reality is that decisions are left to the discretion of individual doctors. The ECHR found “a lack of effective procedure in the Irish Republic for [a woman] to determine her right to an abortion,” whereby women are not necessarily informed of their right to an abortion in life-threatening cases.

More worryingly, a conference of Irish medical professionals held just six weeks before Halappanavar’s death claimed that “direct abortion is not medically necessary to save the life of a woman.” Today’s news runs in direct contradiction to these doctors’ conclusion that “the prohibition of abortion does not affect, in any way, the availability of optimal care to pregnant women.”

While provoking heated debate about the need for Ireland to overhaul its 151-year-old abortion law, Halappanavar’s needless death may also serve as a warning of things to come if Ohio’s fetal heartbeat bill passes. As opponents point out, despite an exception to save the mother’s life, the bill would mean doctors have to wait until a woman is gravely ill before being certain that they can perform an abortion without prosecution.

And as we can see from this case in Ireland, there can be no waiting. There can be no obstruction to a woman’s right to abort a non-viable fetus. Because when there is, women can die.

Photo from 2012 pro-choice rally in Dublin by Flickr user informatique under license from Creative Commons 2.0