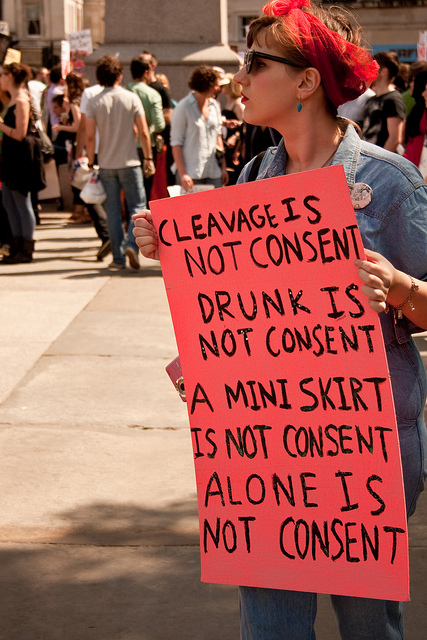 If you visited any of Victoria’s Secret’s social media outlets last night, you might have noticed they were advertising something slightly different from the usual lacy thongs and push-up bras. Within ten hours, 50,000 people had visited PinkLovesConsent.com, a Victoria’s Secret site featuring a collection of consent-promoting underwear.

“Why does Pink heart consent?,” reads the website. “Because PINK loves pleasure. And PINK loves power. And we believe that sex should be empowering and pleasurable for all people!” The campaign even featured a “then and now” page: “Then we loved styles that were all about rape culture. Now we love styles that are all about consent!”

Seem a little too good to be true? After it quickly became clear that Victoria’s Secret was not behind this innovative new line (though we’d love it if they were!), the feminist group FORCE: Upsetting Rape Culture (the same team behind the “Rape is Rape” projections onto the White House last month) admitted to pulling the prank by launching the official-looking PinkLovesConsent website yesterday at noon.

FORCE reported this morning that the response was overwhelmingly positive: “Some people were skeptical, some people were confused, and most people LOVED it.” PR@pinklovesconsent.com received an influx of emails from delighted students, campus reps and even VS employees voicing their support for the company’s major shift in perspective. Wrote one supporter,

Hey, I just wanted to say that I am really incredibly happy about PINK’s consent line. It’s really encouraging to see mainstream clothing that promotes women’s safety and choice while still being fashionable and letting her feel good about her body. I wasn’t a Victoria’s Secret customer before, but I sure as hell am now.”

As for why FORCE chose a Victoria’s Secret campaign to deliver their message, the organizers explain that they wanted to get more people talking about consent:

Consent needs to become a mainstream idea. Just like pausing to put on a condom prevents the spread of STDs, pausing to check in with you partner prevents unwanted sexual experiences.

Though it’s too bad this empowering line of underwear is fake, pranks like these are exactly what we need to make consent part of the conversation–especially in an age where social media has become a medium for social change. Thanks, FORCE, for continuing to combat rape culture. We need more “Ask First” and “No Means No” in a world where people are too often treated as a “Sure Thing.”