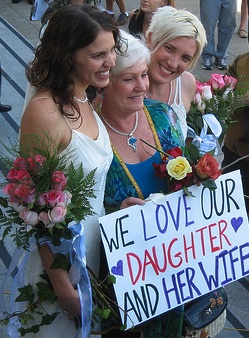 2012 has been a huge year for marriage equality. In May, President Barack Obama declared support for the right of lesbians and gay men to marry–and then he resoundingly won re-election. Three new states approved gay marriage rights in ballot initiatives, and another defeated a constitutional ban.

As December marches on, so, too, does the course of LGBT rights history. Last Friday, the U.S. Supreme Court announced that it will rule on same-sex marriage next year, and this past weekend Washington state’s first bride/bride, groom/groom couples said “I do.” Polls continue to show dramatic upticks in support for this once deeply controversial issue, leading conservative pundit George Will to tell ABC news, “There is something like an emerging consensus. …Quite literally, the opposition to gay marriage is dying.”

As we celebrate victories and anticipate upcoming developments, we should also step back to evaluate how the marriage debate has made it this far–and start giving a good deal of the credit to feminism. Take the two marriage equality cases that will go before the Supreme Court next year–Hollingsworth v. Perry, which challenges California’s Proposition 8, and United States v. Windsor, which aims to smack down the Defense of Marriage Act (DOMA) (PDF). Neither can be viewed apart from feminist history.

Without ever using the word “feminism,” the 2010 Prop 8 trial repeatedly evoked feminist advances. For example, historian Nancy Cott testified about how marriage changed to give women greater autonomy as citizens, crediting such changes to the “Women’s Rights revolution.”

In her testimony, Cott reviewed the history of marriage in the U.S. in terms of traditional ideas about “coverture” (PDF): “Upon marriage, the wife was covered in effect by her husband’s legal and economic identity,” Cott explained. “She lost her independent legal and economic individuality.” In traditional marriage, man and woman became one person, and that person–in the eyes of the law–was the man. Cott explained the rationale for male authority in marriage:

[It] had everything to do with the sexual division of labor. Because assumptions were, at the time, that men were suited to be providers, were suited for certain sorts of work; whereas, women, the weaker sex, were suited to be dependent, needed a stronger hand to guide them, to support them and protect them.

But, she pointed out, “Through the 20th century and into our era, the sexual division of labor is no longer necessary for the kinds of work people do in the world.”

Justice Vaughn Walker took the history of heterosexual marriage into account when he ruled that Prop 8 is unconstitutional, emphatically declaring, “Gender no longer forms an essential part of marriage; marriage under law is a union of equals.”

Marriage equality is, of course, about equal rights for lesbian and gay citizens, and I’m not arguing that the hard work of LGBT rights activists has been insignificant in moving the dial on this issue; however, without a presumption of married unions as equal partnerships–a direct legacy of feminist activism and effort–the idea of lesbian and gay marriage rights would be much harder to advocate. For opponents of same-sex marriage, the gender binary rules. So those who insist that a marriage can only take place between one man and one woman are asking the state to enforce complementary gender roles.

The story of 83-year-old Edie Windsor, the plaintiff in United States v. Windsor who is suing the federal government for discrimination under DOMA, poignantly illustrates the perils of marriage inequality. Together for 47 years, Edie and Thea Spyer were legally married in Canada in 2007. When Thea passed away two years later, the federal government disregarded their legal marriage and forced Edie to pay more than $360,000 in estate taxes, thus treating Edie and Thea as legal “strangers.” In spite of Edie’s loving care of Thea, who battled multiple sclerosis in the last decades of her life, and in spite of the state of New York’s willingness to recognize their legal marriage, DOMA enforces the one man/one woman definition of marriage.

Dan Savage, who renewed vows with his husband in Washington state, explained the importance of marriage for lesbian and gay couples in an interview with MSNBC’s Chris Hayes:

When you marry, you get to declare your next of kin. You get to choose. It’s empowering to say, ‘This person is my next of kin, not my parents, siblings or distant cousins who may be alive.’

Being able to choose one’s next of kin, the person who will be acknowledged as family in the eyes of the law, presumes equality not just with heterosexual citizens but within that foundational union. Windsor, by every account (see for yourself in the documentary Edie and Thea: A Very Long Engagement), was Spyer’s next of kin. Their roles toward one another were not defined by gender, and if Thea had been a man no one would have questioned her marriage. (No one, for example, would have brought up the issue of procreation-as-essential-in-marriage to an octogenarian heterosexual couple).

Even though marriage equality may still have a way to go, we need to acknowledge this new shift in acceptance as a step forward in the history of the institution. As Ms. Blog editor Michele Kort and I discovered when we collected stories for our anthology Here Come the Brides! Reflections on Lesbian Love and Marriage, lesbian wives call into question marriage as fundamentally patriarchal. And in the union of two men, when there’s no woman to subordinate, the word “husband” gets a positive makeover. When lesbian and gay marriage becomes the law of the land, the idea of complementary gender roles (as opposed to chosen behavior) will begin to seem as outdated in personal relationships as feminism has long argued it ought to be in public life.

What does it matter if we bring feminism into our discussions of marriage equality? For one thing, it means that this struggle is not just about the rights of lesbians and gay men–as big a deal as that is. Whether you’re straight or gay, if you’re committed to the feminist principle that marriage is a union of two equals, then you need to take this fight personally. Or else the next marriage the state tries to redefine in traditional terms may be yours.