Continuing the conversation we started with young feminist bloggers here …

The Femisphere: Do you think it’s accurate, as sometimes portrayed by mainstream media and even certain feminists, that young people aren’t as “into” feminism any more?

Gloria Malone: Hell no! It’s a lazy and inaccurate statement. Just because young people’s feminism doesn’t look like that of previous generations of feminism does not mean we aren’t doing the work.

My life doesn’t exist in a silo; I don’t have one identity, I have many that make me who I am, so my feminism reflects that. My feminism isn’t defined by what you think it should be; I define it and I have the right, agency and choice to.

Carmen Rios: Yes! So true. We’re doing great work, but a lot of it is in ‘other movements,’ albeit ones which are inextricably linked to ours. Young people are the future. Period. [The future of] immigration reform, abortion legalization and stabilization, racial dialogue, queer liberation. Our feminism is intersectional and moves within smaller ‘sub-movements’ based around specific issues, but that doesn’t make it less of a feminist approach or framework.

Emily Spangler: I think feminism would be more popular among young women if accurate information was given about the movement and what we’re really about, especially through the media. As feminists, we stand up for a variety of issues. From abortion rights to street harassment, women and men are affected by these issues. If the media actually reported about feminism correctly, more and more young women would identify as feminists.

I discuss feminism in classes (when an issue arises, like women’s roles in society, right to an abortion, etc.) and I state what I believe. Recently, a girl in my English class said she believed that judging women just off their looks was wrong. I said that’s something that people who are body-positive would say. She was confused and lost on what I meant, and most likely doesn’t identify as a feminist. But once I started talking to her about it, she agreed with what I was saying, including not shaming women for their looks and how shaming causes body-image problems.

Nowadays, these issues aren’t usually discussed in school (well, not in my rural Illinois town, anyway), but when they are they make students more culturally aware of the world and of different movements (like feminism) that exist that promote equality.

Carmen: In terms of young feminists, I went to this event recently where so many people were concerned about “the kids” (they called us this) and it made so upset, mostly because I feel like getting into this movement younger is why I’m here now. Tons and tons of young girls are feminists, but feminism doesn’t look or feel like it did in the past—and with good reason. Times are changing, norms are changing, movements are changing … but we’re here, and we are passionate and full of fire! I honestly feel like I’ve met so many young feminists in my life that the idea that we don’t exist is laughable. People who feel that way clearly aren’t looking for us—especially online, where most of us are working. And people are quick to erase and invalidate online activism, but … we’re shaping and creating the next inevitable framework for equality and action.

Without recognition and respect we’ll continue to be invisible, but we’re not going away. That’s for sure.

I think there is this fear within feminism-at-large that it will die out because the younger members of the movement aren’t acting in ways that are familiar to some of those who have been entrenched in the scene for longer. And it feels like that fear has caused things like pushes to rebrand feminism. I would love to everyone’s take on that.

Gloria: We can all learn from each other if the respect [goes] both ways. To engage us, stop ignoring us. Stop saying we aren’t doing the work, stop telling us “we don’t get it,” stop limiting our voices, stop ignoring our contributions and work we have done and continue to do. To ensure a voice, we need to have our own table and they [older feminists] need to come visit once in a while.

Emily: The problem with rebranding is that movements change and evolve over time. Our definition of feminism is different than our mothers’ or grandmothers’ definition of feminism. They grew up with legalizing abortion, the LGBTQUIA community forming, etc., while we are facing issues like sexualizing women in the media, having women of color’s voices heard, etc. The best we can do is identify as feminists and find others involved in “sub-movements” and join in. Each “sub-movement” [becomes] expert on its issues and know what needs to be done.

The best way, I think, for young women to have a seat at the table is for women of older generations to recognize that younger women are starting to join the movement and may bring in different ideas, thoughts and opinions. This starts real discussions, and it’s a time for generations to educate each other.

Carmen: In terms of “do we exist” [young feminists], this is my project at work right now.

All of my activism has been done either exclusively online or with a big Web component, and some older feminists tend to think none of it matters, or did anything, or does anything, or ever will do anything. But I’ve seen my change.org petitions spark curriculum changes for high schoolers, I’ve raised money on Kickstarter to fund entire organizations and movements. If people don’t respect my activism, they don’t respect young feminism, in my opinion. This is the future of the movement. Folks gotta get on board, though. 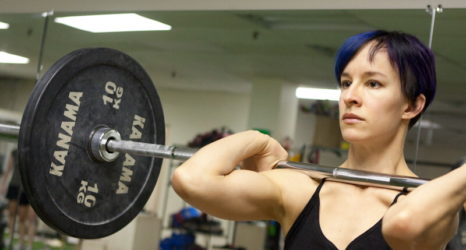