Stop Being Surprised, Damn It - Ms. Magazine
Skip to content

I am not one bit surprised that a heavily-armed Elliott Rodger knocked on the door of Alpha Phi sorority at UC Santa Barbara, and when there was no response, shot and killed two Tri Delta sorority members who were outside.

I am not one bit dumbfounded that when his anxious parents called police to do a wellness check, the police assessed that the 22-year-old would-be mass murderer was a “perfectly polite, kind and wonderful human.”

I am least of all thunderstruck that this misogynist boy-child is white, heterosexual, privileged, gun-owning and considered “a nice guy” by many.

This is not a new story. Elliott is not a new character. In fact, for those of us willing to see what misogyny looks like, this is a hackneyed story. It’s been done before. And it will be done again, unless we can talk about violent men and what makes them that way.

In 1989, Marc Lepine so hated female students (he called them “feminists”) who were studying engineering that he took his Ruger Mini-14 into the University of Montreal’s École Polytechnique, ejected all of the male students and professors from a classroom, and shot the women. He hunted others in hallways, in the cafeteria where they crouched terrified under tables and in a second classroom—shooting anyone female and killing 14 women in all. Lepine left a suicide note which explained, much as Rodger’s manifesto and YouTube videos did, that women ruined his life and should know their place. He left, as well, a list of 19 other women he wished he’d had time to kill.

No more than 18 percent of engineering students were female in 1989.

In 2009, George Sodini targeted a “Latin impact” dance class in a Pennsylvania LA Fitness gym, firing 36 shots into the class of 30 women, killing three of them with his two 9-mm automatic pistols and then killing himself. Like Elliott Rodgers, he left wimpering blog posts about his befuddlement: He is not ugly, not weird, so why did women not like him or want to have sex with him?

In 1998, Mitchell Johnson, 13, and Andrew Golden, 11, pulled the fire alarm at Westside Middle School near Jonesboro, AR, and when the students and teachers filed out, they took aim from a distant field with their two semi-automatic rifles, one bolt-action rifle, four handguns and 3,500 rounds of ammunition. The boys, among the youngest in American history to be charged with murder, killed four students and a teacher, all females. The maximum sentence allowed by Arkansas law rendered the boys imprisoned until they turned 21. Johnson was freed in 2005, Golden in 2007, after serving seven and nine years respectively.

However, that does not take away from the fact that this is not a new story. It is simply one we have refused to really hear.

All of this because they are female.

It is so utterly plain, so axiomatic, as to be idiotic. The problem here is violent men. Not women, not children, but entitled, white, heterosexual men. Beleaguered men. Brittney Cooper labels it best this week in Salon as “pathological white masculinity,” echoed in recent social policy by a “mass temper tantrum from white men that includes a mind-boggling war on women.”

It would be a tired story were it not routinely resurrected and so horrifyingly over the top. But we haven’t been able to talk about our culture that privileges men and white skin and assumes that women are for the taking or burning with acid or humiliating or raping or killing.

It takes balls to talk about the things that frighten us. Women do it all the time, because the things that frighten them are, frankly, men. Now how about if men take a deep breath and listen for a moment to their wives and daughters and mothers and aunts and girlfriends, who are telling them that being angry is OK, but acting it out with hatred against half the population of the world is not. It is old news, pathetic and soul destroying. 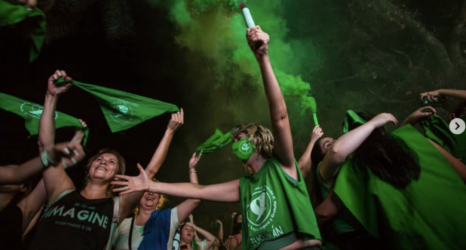