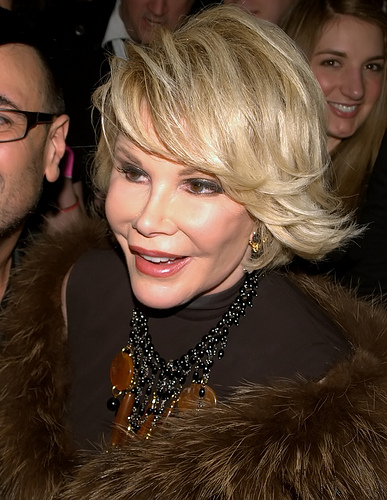 Since her death a week ago, a number of tributes to Joan Rivers have called her a “feminist icon“—mainly, it seems, because she was a trailblazer and door-opener for women who wanted to make it to the major leagues of comedy and because she was so unstoppably driven in her own ambition. On the other hand, others have resisted labeling her a paragon of feminism because of her relentless jokes about women’s bodies (including her own).

What do YOU think? Here’s more food for thought in blogger Audrey Bilger’s 2010 Ms. Blog review of a well-received documentary about Rivers.

Joan Rivers gives new meaning to the expression, “Comedy is tragedy plus time.” In the just-released documentary  Joan Rivers: A Piece of Work from directors Ricki Stern and Annie Sundberg, time is a dominant theme. Cinema verité footage of a year in the life of the groundbreaking comedian, interspersed with archival material, shows Rivers rushing nonstop to stay one step ahead of a clock that keeps ticking. She squeezes more into one year of filming than most people could fit in a lifetime.

Rivers’ calendar is even more important to her than her mirror. Work is the way she keeps time on her side. The film begins with her career in such a slump that she jokes about needing sunglasses to look at her datebook because of all the white space. She defines “fear” as an empty schedule, because, she says, that means people have forgotten you. In the press notes compiled by the filmmakers, there’s a description of just how it important it is to Rivers that she never stop working: “The consummate performer, Joan has already taken precautions in her will so that she will not be resuscitated if she cannot perform a 60-minute comedy set.” She barely takes time to blow out the candles on her 75th birthday cake before she’s back at it again.

“The only time I am truly happy,” she says in the film, “is when I am on stage.”

A good deal of her humor in the film and in her act comes at her own expense. If you don’t like it when women make fun of their own looks and aging bodies, you probably already have mixed feelings about Joan Rivers. Like comedians Phyllis Diller and Moms Mabley before her, Rivers makes use of a standard survival weapon in standup: get a jump on your critics by laughing at yourself before they can laugh at you.

The film trailer includes some hilarious excerpts and painful disclosures:

Rivers plays rough and doesn’t shy away from offensive material. I wouldn’t venture to subject her to a Feminist Litmus Test: The test lab would probably explode. Rivers is all over the map–a pioneering woman in the field of standup but a willing crash-test dummy for plastic surgery; a gay-friendly icon but a pitiless nitpicker; a red-carpet snark-dispenser but a deeply insecure human being. When women comedians come up to her to thank her for having opened doors (past tense) as a woman in the business, she says she tells them, “F**k you!” She wants us all to know she’s still opening doors.

The film takes us behind closed doors and lets us see what gets under Rivers’ celebrity skin.  In the press notes, the directors say that Rivers made a running joke that “if she died during the course of the filming, we’d have a great movie.” Fortunately, comedy beats tragedy, and Rivers wins out in the end. But we’re left with a keen awareness of the price she pays for every wisecrack, and a deeper appreciation for her hard-won success.

Above image of Joan Rivers from Creative Commons, attribution 3.0 unported