Last summer, Feministing founder Jessica Valenti’s “The Case for Free Tampons” ignited an Internet firestorm, rife with vitriol and misogyny, at the mere mention of menstrual policies. What a difference a year makes. In 2015, period positivity is capturing headlines.

Kiran Gandhi’s bold, tampon-free run of the London Marathon was widely celebrated (and just may catapult the phrase “free bleeding” into the next edition of Merriam-Webster). Artist Rupi Kaur scored a public apology from Instagram after it removed her photos of blood-stained sheets and pajamas. And Donald Trump landed the issue smack in the national spotlight when he sneered that Fox’s Megyn Kelly had “blood coming out of her wherever,” inspiring a slew of smart comebacks and commentary.

Efforts to address the financial burden of menstruation via sales tax reform similarly have skirted controversy. Canada’s No Tax On Tampons campaign succeeded in eliminating the national Goods and Services Tax on feminine-hygiene products, effective July 1. Across the pond and down under, activists in the United Kingdom and Australia launched high-profile petitions to pressure their governments to do the same.

But we’ve got a long way to go to ensure menstrual hygiene is more than a headline or passing fad. Rather, it must be a public health and policy priority, especially for low-income women and girls for whom basic necessities like tampons and pads can be cost prohibitive, and for those who are homeless or incarcerated.

Around the globe there is growing awareness that lack of access to feminine-hygiene products can compromise the health, productivity and dignity of women and girls. And exciting innovation is being forged, particularly in developing countries, where circumstances are often dire.

But America lags behind. It is a problem that hides in plain sight here at home—one that potentially impacts millions of women and girls.

New York City is spearheading a solution under the leadership of City Council member Julissa Ferreras, who is launching a groundbreaking new agenda—one that not only can improve the lives of low-income New Yorkers, but also be a catalyst for raising awareness and spurring further reform.

In June, she convened the city’s first-ever roundtable on menstrual health. A diverse array of community leaders—including advocates for the homeless, the hungry, incarcerated women, and low-income students and families, along with women’s health providers—shared the experiences of their clients and helped inform policies to improve access. The roundtable will continue to meet as a regular working group.

Next on the agenda is a plan to provide free tampons and pads in New York City’s public schools, shelters and correctional facilities. This will include the rollout of new, modernized restroom dispensers conceptualized and created by Free The Tampons, along with a year’s supply of donated products. The school component will launch this year with a pilot project in Corona, Queens, and a series of focus groups to gauge the needs and concerns of students, beginning with a session with PowerPlay, a girls’ empowerment program.

Leading by example, Ferreras already provides these products gratis in her offices; she is arranging donations so that every other City Council member can do the same.

The council will also introduce two legislative resolutions: to eliminate the New York state sales tax on all feminine-hygiene products; and to authorize inclusion of them in the Supplemental Nutrition Assistance Program (food stamps) and Women, Infants and Children (WIC) nutrition program.

The impact could be felt beyond New York City. At the state level, 40 of the 50 states currently collect the notorious “tampon tax.” New York is one of those 40; legislation to eliminate the tax was introduced last spring, and will be championed again in the upcoming session. If New York makes it happen, the other 39 states should be pressured to follow the Empire State’s lead. (Ohio has already introduced similar legislation, as well.)

The city’s efforts also set the stage for federal policy change. Reform should include amending the IRS Tax Code so that feminine-hygiene products are eligible for Flexible Spending Account allowances. And it is due time we demand a re-examination of the scope of the food stamps and WIC programs so that essential items like tampons are included.

There is also the Robin Danielson Act, federal legislation introduced by Rep. Carolyn Maloney (D-N.Y.) and named for a woman who died of Toxic Shock Syndrome. The bill would require resources for independent research into the potential hazards posed by the synthetic fibers and chemicals used in the production of tampons. Says Maloney, “American women spend well over $2 billion per year on feminine-hygiene products, and the average woman will use over 16,800 tampons and pads over the course of her lifetime. Despite this large investment and high usage, there has been limited research on the potential health risks these products may pose to women.”

Finally, and importantly, the New York City initiative advances a vital message: that the ability to manage menstruation is a necessity, not an entitlement or privilege. And that no one should have to miss work or school, or risk their health, or compromise their dignity, because they menstruate.

Jennifer Weiss-Wolf is a lawyer, fierce advocate for and frequent writer on issues of gender, feminism and politics in America. Dubbed the “architect of the U.S. campaign to squash the tampon tax” by Newsweek, she is the author of Periods Gone Public: Taking a Stand for Menstrual Equity, which was lauded by Gloria Steinem as “the beginning of liberation for us all,” and is a contributor to Period: Twelve Voices Tell the Bloody Truth. Find her on Twitter: @jweisswolf.

Student Activists Are Breaking the Silence on Period Poverty 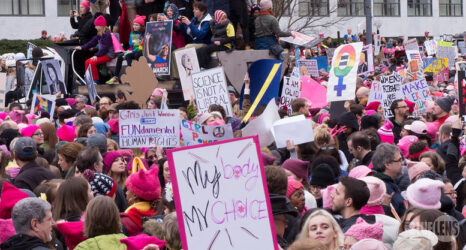