95 percent of my LAD artery, nicknamed the “widowmaker,” was blocked. A drug-coated springy lattice tube called a stent was inserted via my wrist to prop open the clogged blood vessel. Released from the hospital the next day, my doctor boasted that I would henceforth feel better than ever since blood was finally flowing freely between my heart and the rest of my body.

During the first 24 hours after my heart attack I could not stop thinking about the wonders of medical science. My stent replaced the need for bypass surgery and allowed me to walk out of the hospital a changed woman. The difference between the old me and the new me was a very small scar on my right wrist and a feeling that I was ten years younger.

A week later reality began to sink in: I had almost died.

I have always been a very active person. Over three years ago, I started CrossFit—a fitness program that stresses varied and functional movements performed at high intensity. I was the oldest CrossFitter at my box—the term used in place of “gym” by CrossFit centers.

I fell in love with CrossFit for many reasons. It was a community that accepted, encouraged and challenged me. As an older woman all the other gyms I had been a member of stressed that being and/or looking young was the primary aspect of qualifying as fit. At 59, I accepted that I did not look 30—but that meant that under the glaring lights and mirrors of a traditional sports club, I stuck out. Bored with “working out,” and longing for a change, I found CrossFit. I clicked with my first coach—who encouraged me to find my own level of strength and then challenged me once I mastered the basic skills. I stuck with it and felt a dramatic gain in muscle, ability and confidence.

I lifted barbells and did burpees. I participated in the CrossFit Open. I turned 60 and then 61. I set a personal record in March of this year when I dead-lifted 200 pounds. I was in the best shape I had ever been in.

Not that there weren’t any downsides. I took three months off with an IT band injury that physical therapy and a slow return to CrossFit helped heal. And as I wracked up 3-plus years as a CrossFit master, the intensity of some of the workouts began to leave me feeling very tired.

Naps became de rigueur in my daily routine. Every day I would lie down for 20 minutes, which sometimes stretched into 70 or 80.  I managed to get eight hours of sleep a night but it was never enough. The post office is just nine blocks from my apartment but I found myself taking the bus there and back instead of walking. A steep set of stairs would leave me out of breath, just as a short and intense workout would. I would still be huffing and puffing on the six-block walk home a good 15 minutes after my workout was over.

I thought nothing of these changes and chalked them up to getting old.

My CrossFit box schedules one day a week for a workout they call the 360—a longer, cardiac based workout I grew to dread because it was never as mentally challenging as a regular CrossFit workout. 360s are usually AMRAPs (as many rounds as possible) of a set of movements like jumping rope, swinging kettle bells and—in good weather—running up and down the block. On July 19, I gave up on one part of the 360 workout—a simple 200-meter run. Going from 85th Street to 86th Street and back felt impossible.

For the first time in my three years of CrossFit, I walked the 200 meter run.

I am old. I work out a lot, and that makes me more tired than normal. These were the excuses that went through my head while walking home that day. While I was disappointed in myself, I concluded that perhaps my sixties would be the decade that I would have to admit I could no longer perform simple moves like jogging.

I needed a nap that afternoon, but never got around to it. By dinner, my fatigue was overwhelming. I remember shuffling around the kitchen preparing dinner for my husband, thinking a quick lie-down on the tile floor would really help. After dinner, I sat on the couch with my laptop propped open and started to feel chills. As I stood up to retrieve some notes off a table, I felt dizzy.

“In fact, call an ambulance,” I said, much to his surprise. “Something is wrong with me. I think I might be having a heart attack.”

The next thing I knew, I was lying flat on a table in an operating room about to have a routine angiogram. Suddenly, a doctor leaned over my head to tell me he found my blockage and what a very lucky woman I was.

Now I know exactly how lucky.

Heart attacks are still associated primarily with men. Tim Russert died when plaque ruptured his LAD artery and he had a heart attack. The same happened to James Gandolfini. Yet heart disease is the number one killer of both women and men in the U.S. The difference is that women often experience atypical symptoms like I did: fatigue and dizziness, feelings of coming down with a virus or the flu, back pain, jaw pain and chest pains.

The only reason I am still here is because I listened to my body. Perhaps being fit helped me to do so. I have been treated for high cholesterol since I was in my early fifties. Heart disease runs in my family. Since my heart attack I have learned that, unfortunately, the first sign that you have heart disease is usually death.

In the late 1970s I spent an evening with Carrie Fisher. I was dating William Hurt, and, together with Carrie and the actor John Heard, we attended NY Fashion week and then had dinner at a restaurant on the Upper West Side. I sat next to her. She was funny, smart and very warm. I tell the story of my own heart attack to honor her. I hope her death helps raise awareness about the many subtle symptoms of heart disease in women and the importance of exercise.

Last week I graduated cardiac rehab. My doctor’s advice is to keep up the cardio workouts and remain the oldest CrossFitter at my box.

Donna Kaz is the author of UN/MASKED, Memoirs of a Guerrilla Girl On Tour, which follows her surprising 25-year journey as a survivor of domestic violence and subsequent member of the feminist activist group the Guerrilla Girls. 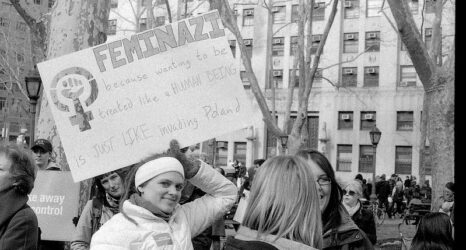 Thank You, Rush Limbaugh, For My Feminism