“At last, the nightmare is over,” Sonia Tábora said as she left the courthouse in Sonsonate, El Salvador.

Tábora, who spent seven-and-a-half years in prison for a crime she did not commit, was recently declared innocent after a 12-year legal fight in which she was accused of abortion after delivering a stillborn in a coffee field in 2005.

After the stillborn body was found in the fields, police filed charges against Tábora. Being accused of abortion currently carries an eight-year prison sentence in El Salvador, but Tábora was instead found guilty of aggravated homicide. From the hospital, she was taken to jail.

The work of local feminist group Agrupación Ciudadana por la Despenalización del Aborto (Citizen Group for the Decriminalization of Abortion) led to Tábora’s release in 2012 after a three-judge panel found her not guilty for lack of evidence. One of the judges on the panel, however, had convicted her in the original trial—so The Criminal Chamber of the Supreme Court of Justice in El Salvador chose to review her case in late 2014.

Between 2014 and 2017, Tábora’s trial was postponed three times. While she waited on justice, she worried about the impact her returning to prison would have on her infant son. “It was extremely painful for me,” Tábora said. “You never get used to it.”

“What Sonia lived, the criminalization, persecution, and re-victimization, was cruel, inhuman, degrading and a form of torture,” Sara Garcia, coordinator of the Agrupación, told Rewire. “The State is supposed to be responsible for providing access to justice. However, each time she appeared at court in order to try to prove her innocence yet again, the hearings were postponed, and she was denied access to justice because of errors committed by the judicial system.”

Tábora’s ordeal shows how unjust convictions are in El Salvador—and she is not alone. Dozens of women have faced criminal charges as a result of the nation’s criminalization of abortion.

The prosecutor’s office never conducted an autopsy of the newborn found in the coffee field. Medical experts in both trials testified based on existing evidence that the newborn had been stillborn. Katya Recinos, an attorney who worked with Agrupación on the case, noted that in several cases judges and prosecutors “reasoned that linking a woman to a deceased baby or fetus through a DNA test—that is, proving that she was the mother—was sufficient to assume that the woman was responsible for the death.”

Tábora’s judges declared that the Salvadoran government owed her compensation for both external and internal damages suffered due to inhumane imprisonment. Judges also declared that Maria Teresa Rivera, the first woman to be imprisoned without evidence in a similar case, was owed compensation. Legislation currently pending in the Salvadoran Legislative Assembly would reform the country’s laws to allow abortion under some circumstances, which would put an end to accusations that lead to women like Tábora and Rivera being unjustly imprisoned.

“There was no cause or manner of death established and no way to establish if a crime was committed,” Recinos said. “Tábora never should have been tried and certainly not convicted and imprisoned.”

Meliss Arteaga is an editorial intern at Ms. She studied at California State University Northridge and has a Bachelor’s Degree in journalism and minor in gender and women studies. 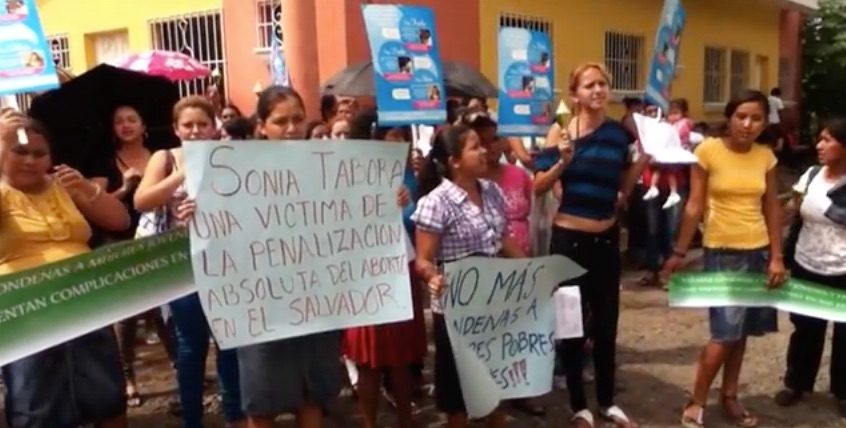