In 1916, 33-year-old widow Marian Newhall Horwitz made the difficult decision to leave her affluent Philadelphia life behind and move to frontier Florida. Her husband had planned an agricultural venture there and although he had died suddenly, she intended to continue in his place.

She soon found herself and her young son on a 2000-acre farm in the northern Everglades, near Lake Okeechobee, far from Florida’s burgeoning coastal cities with fashionable tourist hotels and six-story “skyscrapers.” She grew corn, beans, cabbages and especially potatoes, which particularly thrived in the muck there. Only recently had farming started in the region, for this was primarily the land of cattle ranches and Florida cowboys. Barbed wire fences stretched for miles along unpaved, dusty roads, and cattle drives ran right through Okeechobee, the largest city.

Her husband’s business partner in this new undertaking, John J. O’Brien, a newspaper editor in his late twenties, settled on an adjoining farm. He was an adventurous man who liked to hunt and was described in one admiring newspaper report as “strong-jawed and square-shouldered.”

Together, they began to develop the small town of Moore Haven, on the Caloosahatchee River where it meets Lake Okeechobee. They built a general store—she ran it. They founded a bank—she was the president. She established a Woman’s Club with a library. They formed a vegetable exchange, started a canning factory, and organized a land development company. Through her lobbying, Moore Haven became the Glades County seat and, importantly, a stop on the railroad.

The farm was now supplying produce to large parts of the country and then to American troops abroad, for the US had entered World War I. Marian and John quietly married before John, a captain in the National Guard, joined the war effort. Marian carried on alone then, and from all reports, she was thoroughly competent and resourceful. Indeed, when her son later recalled that time in his life, he said, “Things could not go too far wrong when she was about.”

Moore Haven was incorporated in 1917, and women were granted the right to vote that year, three years before the passage of the 19th amendment. Marian was nominated as a Democrat for mayor and ran unopposed, making her the South’s first woman mayor. This brought her national attention: she was mentioned in the New York Times, the Saturday Evening Post, and the Literary Digest. Some newspapers dubbed her the “Duchess of Moore Haven.”

While the phrase was intended as a compliment, it revealed the gulf between her and the townspeople. The differences became even more pronounced when she hired African American workers for the potato fields, a courageous step in the deeply segregated South. This so enraged the town’s white workers that they formed vigilante groups. When she tried to protect the African Americans, armed with her own guns, she barely survived a bullet aimed at her head.

Once John came home from the War, they moved 15 miles away to the larger city of Clewiston, also on Lake Okeechobee. With a new business partner, they formed a sugar company and cultivated acres of sugar cane, creating an industry still vital to the city today. Marian hired an architect and organized a plan for the downtown with wide boulevards and roundabouts; she built the historic Clewiston Inn.

But the differences between the couple and the town only intensified. People took exception to their wearing riding breeches, holding Catholic mass in their home—John was Catholic while the town was Southern Baptist—and, incredibly, drinking tea in the afternoon.

Such hostility only added to the struggle to survive in a punishing natural environment, now suddenly battered by storms. A storm in 1921 killed herds of livestock and over 300 people. The city of Clewiston was devastated by the infamous category five 1926 Great Miami Hurricane, which also nearly destroyed the sugar cane fields. Another hurricane arrived two years later. Then, the Great Depression dealt the final blow for the O’Briens.

The family decided to move to Michigan. There, both John and Marian were soon active in anti-prohibition causes: Marian, with the Women’s Organization for National Prohibition Reform, and John, with the Crusaders. Marian was on a speaking tour when she caught pneumonia. She was rushed home, but died at only age 50.

Although not well-known in women’s history, Marian’s life and accomplishments haven’t been forgotten. A re-enactor celebrates her life in presentations, and a proud photo of Moore Haven’s first woman mayor graces the town hall, facing across the street to the Caloosahatchee River.

Erika J. Waters, Ph.D., is Professor Emeritus from the University of the Virgin Islands. She founded The Caribbean Writer and researched early Caribbean women writers with grants from the National Endowment for the Humanities and Tulsa Studies in Women's Literature. She's published articles, interviews, and reviews in journals and magazines and was a Fulbright Scholar to Finland. Her most recent book is Discovering Old Florida: A Guide to Vintage South and Central Florida--where she first learned about the intriguing Marian Newhall Horwitz O'Brien. 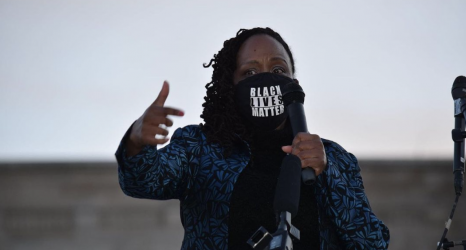 No Democracy Without Black Women

Six Things Feminists Should Know About the War on Drugs
The Ms. Q&A With Ani DiFranco: “You Have License To Be All the Aspects of Yourself and To Be Unashamed of Them”
2021 Poetry for the Rest of Us