War on Women Report No. 18 - Ms. Magazine
Skip to content

+ At a fundraising event at Mar-a-Lago over the weekend, former New York City mayor and longtime Trump surrogate Rudy Giuliani made an inappropriate joke about former Democratic presidential nominee Hillary Clinton—and the president reportedly responded to the joke by laughing, and saying he was “just glad” that he hadn’t been the one to make the offensive comment.

+ Former Trump communications aide Sam Nunberg on Monday called press secretary Sarah Huckabee Sanders a “fat slob” in a televised interview with NY1. “You know what? You know what? If Sarah Huckabee wants to start debasing me, she’s a joke,” he said in an unhinged tirade. “Okay, fine, yeah, she’s not attractive. She’s a fat slob, okay, fine.”

+ On Monday, the Associated Press reported that according to White House sources, Chief of Staff John Kelly has no idea what Trump’s daughter Ivanka and son-in-law Jared Kushner, both senior advisers, even do. The report comes just a week after another report said the president wanted Ivanka and Kushner out of the White House, but simply didn’t want to be the one to remove them. It’s widely believed that Ivanka and Kushner, hailing from an elite New York background, have tried to use their influence to counter extremist ideology in the White House, but they have little to show for it. In fact, the only real success “Javanka” has had has come from their use of the White House to profit their brands.

+ On Tuesday, amid the president’s decision to impose a steep, 25 percent tariff on steel, his chief economic adviser Gary Cohn formally announced he would resign. Cohn had reportedly worked tirelessly to change Trump’s mind. Cohn, who is Jewish, had thought about leaving once before, following the president’s weak response to neo-Nazi protests in Charlottesville over the summer. Many experts believe the tariffs, widely opposed by both Republicans and Democrats, could cause a dangerous trade war that will cost thousands of jobs around the world and in the U.S.

+ A Politico report published Tuesday revealed that Valerie Huber, acting deputy assistant secretary for population affairs at the Department of Health and Human Services and a leader in the “sex-avoidance” movement, will now make the final word on whice groups receive federal family planning funds. Typically, this responsibility was left to a group of officials. Huber, former president and CEO of a national organization promoting abstinence and former manager of Ohio’s Department of Health’s “sexual risk avoidance program,” is likely to use this responsibility to bolster the Trump administration’s ongoing attacks on Planned Parenthood, which relies on government funding to provide critical preventive health care to low-income women.

+ On Wednesday, education secretary Betsy DeVos visited Marjory Stoneman Douglas High School in Parkland after the Feb. 14 shooting that killed 17 students. According to students, DeVos did not meet with any of them and failed to offer any substantive answers to their questions. This administration has been frustratingly ambiguous about their stances on guns and school safety after the shooting, with the president pitching everything from arming teachers to taking away guns. Many of the students who have understandably become activists for reformed gun laws following their experiences found DeVos’ responses to their questions unsatisfying, with one student tweeting that DeVos had only “talked to three people, and pet a dog” in her short visit.

Betsy Devos came to my school, talked to three people, and pet a dog. This is incase the press tries to say something else later

+ Thursday was International Women’s Day, and tweets from anti-abortion crusader Mike Pence, the notoriously complicit Ivanka Trump, and the State Department which erased contraception and abortion from a report on global human rights for women were met with scorn and jokes on Twitter. Many of the jokes directed at Pence highlighted how he famously refuses to be alone with women who aren’t his wives, even if just for lunch, and how he has called every one of the women accusing Trump of misconduct liars.

+ In an appearance on Fox Business Network, the president’s daughter-in-law Lara Trump criticized NBC for last week asking Ivanka about sexual misconduct allegations against her father. Lara called the question “inappropriate,” suggesting Ivanka, despite identifying as a feminist, should never be asked about the president’s treatment of women, and the women who claim he abused them. “I know my father. So I think I have that right as a daughter to believe my father,” Ivanka had said. Her response to the question particularly drew criticism because of how oftenshe tries to identify herself not as the president’s daughter, but as just another senior adviser.

Kylie Cheung is an editorial intern at Ms. She writes about feminism in politics and pop culture with a focus on reproductive justice. Her work appeared in Rewire, Teen Vogue, The Mary Sue and Mediaite, among others. 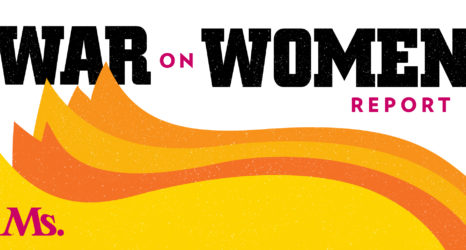 This Week in President Trump’s War on Women

The War on Women Report: This Week’s Attacks from the Trump Administration

“Innocent People Are Going to Die”: The Price of Presidential Narcissism and the Path of Peaceful Resistance
Here’s How Ohio Women Legislators Are Working to Keep Abortion Clinics Open
Abortion is Essential, Not Elective: How Republican Politicians are Using COVID-19 to Restrict Reproductive Health