Feminist kids and parents alike rejoiced in 2016 when Good Night Stories for Rebel Girls, an illustrated anthology of biographies of groundbreaking women by Francesca Cavallo and Elena Favilli, finally made its way into their homes.

The anthology provided fodder for bedtime that went beyond princesses and damsels in distress—focusing instead on the real-life tales of women and girls like Ruth Bader Ginsburg, Beyoncé and Malala Yousafzai. After breaking the mold for children’s literature—and breaking the Internet with the most successful publishing crowdfunding campaign in history—the authors published a second edition in 2017, featuring 100 more incredible women from across the globe and through the centuries in its pages. 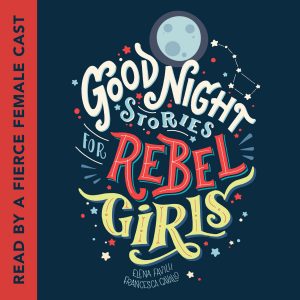 Two years later, a fierce and feminist celebrity cast are helping to bring the 200 powerful stories in those books to life through audiobooks out this week. Award-winning musicians, actors and advocates narrate the entirety of the two-book collection in the new recordings, including GRAMMY Award‒winning musicians Alicia Keys and Esperanza Spalding, Time’s Up leader and Emmy Award nominee Ashley Judd, comedian and activist Janeane Garofalo, Tony Award nominee and actor in  Broadway’s Hamilton Phillipa Soo, actor Rowan Blanchard from A Wrinkle in Time, EMMY Award nominee Samira Wiley from The Handmaid’s Tale and House of Cards actor Mozhan Marnò. Additionally, the introduction is narrated by the book’s authors.

“Our goal as writers and activists has always been to write stories that could give voice to extraordinary women who had been forgotten or belittled,” Cavallo and Favilli said in a press release. “To see those same stories now come to life through the voices of some of the most inspiring rebel girls of our time could not feel more powerful.”

Danai Gurira, Tony Award‒nominated playwright and actor from the critically acclaimed film Black Panther, reads the story of Ms. co-founder Gloria Steinem’s life in the new recordings. In an exclusive for Ms. readers, a clip of her bedtime story appears below.

You can preview more stories from the audiobooks and purchase a CD or digital download at rebelgirls.co.