Nothing About Us Without Us: Women and People of Color Should Be Shaping Our Immigration Policies - Ms. Magazine
Skip to content

After a picture of President Trump’s consultation meeting regarding the separation of migrant families surfaced on Twitter last month, Congressman Joe Kennedy III spotted a problem—and responded in kind.

“You might not know this about me, but I’m a white guy,” he wrote in a tweet, “and as a white guy, I would encourage [Donald Trump] and his fellow GOP white guys to consult a not-white-guy in their efforts to enact comprehensive immigration reform in less than 24 hours.” 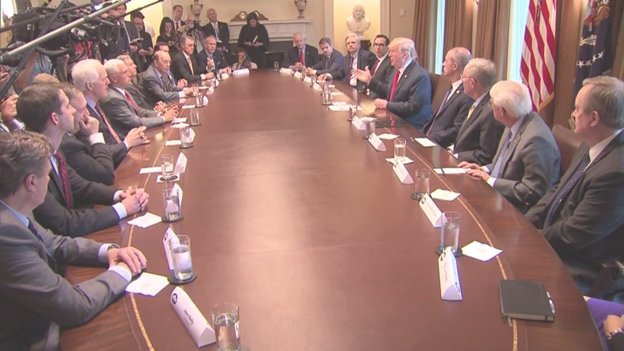 The demographically homogenous meeting in the photograph took place after the Trump Administration’s enforcement of a zero-tolerance policy toward all migrants crossing the border illegally left thousands of families separated, and on the cusp of protests nationwide sparked by news of its implementation.

This week, the Commissioner of U.S. Customs and Border Protection (CBP), Kevin McAleenan, stated that the agency will temporarily suspend the referring of migrant adults with children who cross the U.S.-Mexico border for prosecution. On the same day, Attorney General Jeff Sessions defended the Trump Administration’s continued enforcement of the zero tolerance policy. Because of the countless contradictions put forth, it is difficult to judge what the current protocol is. (If only the Trump Administration’s messaging was as uniform as the cluster in that photo!)

This discussion about an issue that affects women and people of color is being carried out by individuals who do not fit into either of those categories—yet there are qualified leaders who do and should be at the table. Women in particular should be involved, given the statistics proving the success and potential in reducing discord and cultivating stability their involvement gives rise to. When women are involved in peace and security talks, the solutions produce more successful results—so why aren’t they involved here?

Women’s participation increases the probability of a peace agreement lasting at least 15 years by 35 percent. The involvement of civil society groups, including women’s organizations, makes peace treaties 64 percent less likely to fail. In addition to the quantitative evidence, we must take into account that female security officials typically have access to arenas that are unavailable to men. This access allows them to gather intelligence about potential security risks and therefore address these problems as a collective unit.

With the continued confirmation that women involvement yields successful results in peace and security endeavors, the disservice done by this administration to U.S. national security is made clearer every time they refuse to give them the seats at the table they deserve.

“Nothing about us, without us” is a demand should be adopted in this setting—regarding race as well as gender. The needs of those affected by these issues are not being met sufficiently because there are not advocates with awareness at these discussions. Personal affiliation allows folks to report issues faced within their communities back to those who are unaware, and once the information is shared, it is impossible to ignore. As this administration continues to disregard the possible strategy solutions, it sets forth a tone of intentional ignorance.

In this context, representation matters to everyone involved, because critical national security resources are at stake. Having to revisit the same issues after putting forth an incomplete plan is a waste. In the case of the Trump immigration advisory meeting, it is not as though representatives who can provide insight on this issue are a mystery to the administration. The Congressional Hispanic Caucus, led by Chairwoman Michelle Lujan Grisham, would be a great place to start looking—as eight of its 31 members are women. I am sure that these and many other experts could weigh in on, and enlighten, the administration regarding the very serious national security risks compounded by their xenophobic practices at the border and beyond.

Humanity is plural, and we need conversations that are reflective of that.  Inclusivity at the problem-solving table yields lasting solutions. Issues of national security need to be handled with care, and by refusing to use a very simple strategy that has demonstrated benefits, we set ourselves up for unnecessary barriers to our own national prosperity. Women’s involvement will be a remedy to the humanitarian crisis unfolding on the southern border—and it is one that must be called upon before it worsens.

LaNaya Butler is a communications intern at Truman National Security Project. She is a Northern Virginia native and currently studies Political Science and Africana Studies at Rutgers, The State University of New Jersey. Views expressed are her own.