A Woman for Change - Ms. Magazine
Skip to content

This piece is part of the the Eucid Series, which highlights the voices of contemporary, urban women from Mongolia to draw up a genealogy of female mentorship. At the end of each interview, each woman was asked to name a role model, who was then interviewed and came next in the series. This is the final post. 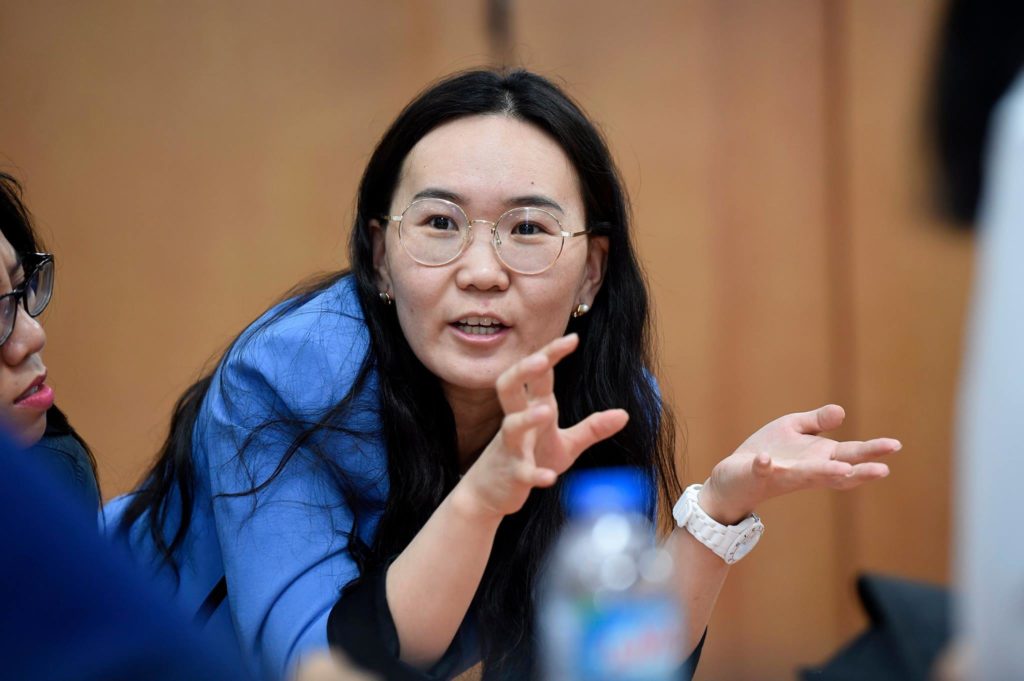 It was the coldest week in winter, and we had to move our house. At night, we moved it. Every second night for fourteen days, we moved it.

There were three men. They helped us build the house. They had a truck, and they were so kind, helpful, coming each night to move our house. We can’t move it ourselves. We can’t move it during traffic times. So we waited until the traffic ends—around 10 p.m., something. 10 p.m. to 1 a.m., we are moving our house to the next place. Then we set everything up, and the next morning we go there to greet our visitors.

The house is two meters by one meter. The outside like a brick wall. Inside, we printed a living room—TV, couch, windows. One desk. One chair. One headphone set.

We made the voice. The National Center Against Violence collected words from the victims, and they sent us those words. The voice speaks those words: “Your food is not tasty.” “You are nothing.” “You do not have anywhere to go.” “I can kill you if I want.”

We put a sign on our house—“if you are very sensitive, if you are pregnant, if you don’t want, you can skip our house.” We did this because we tested this project within our community and saw the impact, because the topic is not easy, and it is kind of a traumatic experience. After people experience our house, we gave them candy. We had psychologists there to talk, and volunteers had stress-management techniques, like breathing techniques, to share with them.

Eight places, we put our house. I called 28 places to ask would they cooperate; eight places agreed, all of them with woman managers. We put our house in a cinema, a supermarket, a women’s right event, at a workshop for journalists, a university, a men’s detention center. We put it in the Eagle News Studio, and we invited the parliament members, each one by name, to come sit in our house. Only two of them came, out of 76.

The person enters our house, sits at the table and puts on the headphones. They hear the voice of the abusive partner. When they leave, they are asked to sign a letter to the parliamentarian member elected from their region: “I am your voter and so on, and I want you to adopt laws related to domestic violence, to end domestic violence in Mongolia.”

The last day of our installation, it was a Sunday at the supermarket in a residential district of the city. Who was at the supermarket on a Sunday? Mostly women—middle-aged or older-middle-aged. The shopping women and the saleswomen, they experienced our house and, that day, when they came out, most of them were crying or shaking. We had psychologists, but it was still hard. Hard for them. Hard to see.

More than 500 people experienced our house. Five hundred letters were sent to parliament. During the discussion of the domestic violence law, some of them said, “I got this letter, which is promoting western culture with foreign money,” because we were funded by the Canadian embassy. “These NGOs are bringing western culture,” they said. I can only understand his meaning this way—that domestic violence is our culture, that violent culture is Mongolian culture. Finally it was adopted, on December 22, 2016. Now, we have the law. When it was adopted—there were no words to tell about my feelings on that day. It was human rights advancement in Mongolia. Right there. The result of over 20 years of work by the National Center Against Violence, NGOs and activists. When they started working on that issue, people were saying: “Why you are bringing that negative word to Mongolia, that ‘violence’ word.” Twenty years later, and we have law.

We destroyed our house. The voice is still with us, but the house is gone.

I get calls from other provinces sometimes, from other events. They ask can they borrow our house. “Can you send me your voice?” they ask me. I tell them, “That’s not the voice you want to hear.”

Because we know. We all know what domestic violence is, so do not, like, wake the trauma of the people. Eight places and 600 people were enough.

When we started in 2010, we called ourselves Young Women for Change. We were all students in Ulaanbaatar. We were active in youth campaigns—Hands Up for Your Rights and Let’s Develop Youth Club. We decided to have our own space; our problems were different from what other age and other genders are feeling. For example, sexual harassment is common in public places. When I do workshops about gender equality or sexism, I ask the students: “If there is anyone here who has never experienced sexual harassment, raise your hand.” I have never seen a woman raise her hand.

We created a space to share things like that and to change them. Our first project was the Vagina Monologues. I was not an actress, but I acted. My monologue was: “I was there in the room.” I talked about watching a woman give birth. At that time, I hadn’t experienced birth. I was braver. Now, I’ve given birth, and if I tried to speak about that topic, maybe I couldn’t. Now I know how hard it goes.

Even the word—vagina. It’s like, it’s not really taboo, but it’s not a spoken word. And to speak it from the stage… We had to practice. Together we shouted the word. We practiced to be loud. When I was preparing for the play, I was all the time with my words—in the street or at my class, memorizing. I didn’t know to act for something, you have to memorize every word. I was always whispering my words—“I saw the colors of her vagina, saw the bruised broken blue, saw the blistering tomato red.” My classmates, in school at that time, were curious about what I was doing, so we had new discussions about sexuality.

At that time, the Young Women for Change were all together, united. We were boiling. We were boiling with the monologues and the topic. And now, because we started with such such a “questionable” topic, now people don’t question us. Now, seven years later, we are Women for Change. We have over 70 members: young professionals, mothers, single mothers, women with disabilities, students and many other groups. We work for women’s empowerment and leadership, gender equality and youth civic engagement.

We are currently implementing a comprehensive sexuality education project called Red Corner. We talked to the young people in Ulaanbaatar and Dornogovi province. We gave surveys. We sat with young people in a very safe environment, in a very trusted way. We asked very intimate questions: What age did they have sex first? Did they have any satisfaction, any—what is your word, orgasm? How many times? What are different ways they feel pleasure? What do they think about safe sex? Very intimate questions.

From this, the need of sexual education, oh my god—it’s so clear.

Safe sex is not widely practiced by young people. Young people don’t know that sex without a condom can lead to pregnancy, or maybe they know, but still they choose unsafe sex.

Or sexual minority youth have no one to ask questions. Or people with disabilities, their families or others think they cannot have a sexual life, but that’s not true.

For the receiver, especially, that capacity to make his or her own choice. Some young people say “no means yes,” or they say “Mongolia’s women are so shy and pure, they do not look like they want when they want.” It’s that toxic masculinity culture. Gender stereotypes promote that men should be macho in intimate relationships. From childhood and throughout life, we should start and teach this comprehensive sexuality education.

So we need our Red Corner project. We need our mother’s group, to promote gender equality. We need our comic, Mongolia’s first feminist comic, “Gaikhmaa (Ms. Curiosity) Finds the Answers to her Questions,” about a women’s participation in political decision making. There are 13 women today in the parliament out of 76—the highest in all our history. We need our 6-D Café, where women come for six Saturdays to discuss gender equality and Everyday Sexism.

I read this book. This book make me realize there is no work-life balance. There is only life, and sometimes there is something missing. For example, this morning I was leaving home, and my baby got a small health issue. So now I am here, I am talking to you, but also I’m nervous with that problem, so I’m stopping, thinking about him.

Or even, while I was working on the “Behind Closed Doors” project, I didn’t see my son for days. I was living in “our house,” not in my home. I was getting home after my son was sleeping, leaving while he was still sleeping. During that time, my son needed to be vaccinated, and my husband asked me, “when are we going to the hospital to get his vaccine,” and I was feeling at first very guilty. A few days later I told my husband: “I am trying to give a vaccine for every child’s family in Mongolia. So my only son can wait.” 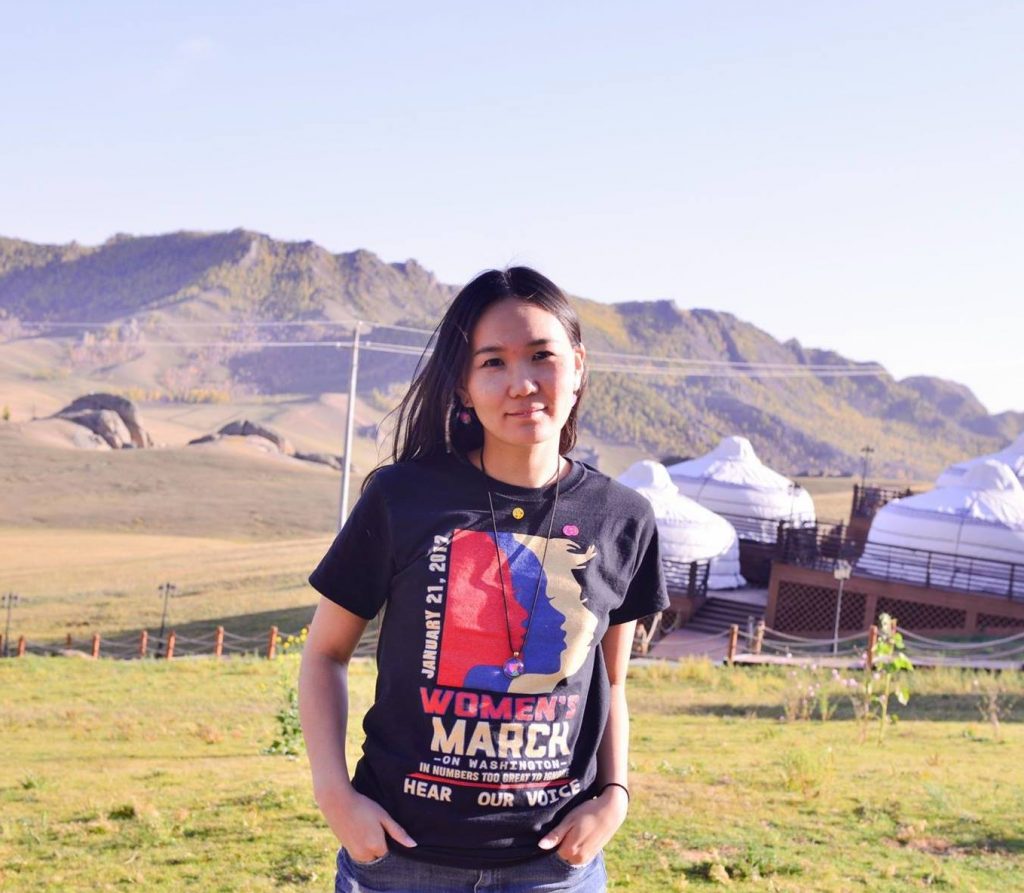 2014 was a big year. I was raised up by my grandma since I was three years old; I lived with her until I became a university student. My sisters and I took care of her because she was disabled and not able to move. In 2014, she passed away, and I got my baby. That year was such a transition year for me. I experienced death and birth, which are the only two truths in people’s lives. Both in one year.

Since that year, I know material things aren’t important, so I collect memories. I try to make them valuable, lovable. There’s a saying in Mongolia—I wish you to greet your mornings with the kindest people. This is my feeling.

I want to teach my children, our children and our society how to live together—not to violate, harass, abuse each other. You think you forget the small memories—the person in the elevator or the supermarket. We don’t forget. Even those things affect us. I work to make better memories for us.

I work for my values every day. Every hour.