Will Promoting Gender Equality Be a Winning Strategy for Women Candidates in the Midterms?    - Ms. Magazine
Skip to content

With the 2018 election now in full swing, the Ms. Blog is excited to bring you content presented in conjunction with Gender Watch 2018, a project of the Barbara Lee Family Foundation and the Center for American Women and Politics. They’ll be tracking, analyzing and illuminating gender dynamics during election season—so check back with us regularly!

Anecdotally, many female candidates among the record number of women running for office in 2018 have stated that the #MeToo movement, the larger women’s movement and the 2016 election of Donald Trump inspired their decision to run. I wrote earlier this year about how American attitudes concerning sexual harassment may impact voters in this year’s midterm elections, finding that while sexual harassment is a concern that is viewed seriously by most Americans, party ultimately trumps the issue when it comes to vote choice.

Left unanswered, however, is whether attitudes about gender quality more generally will serve to boost turnout this election cycle—particularly among Democrats and women. How much do voters prioritize gender equality as a critical issue? Will running on such gender equality platforms be helpful for Democratic candidates more generally—and women candidates, more specifically—come November?

To help address these questions, I turn to data from a national, online survey of 1,100 Americans that I conducted using Qualtrics Panels between June 18 and 22. I asked Americans whether gender equality was an issue of critical importance to them personally, one among many important issues or not that important of an issue—and weighted the data to match the U.S. population in terms of sex, age, race, education and income.

As my previous work about Tea Party women demonstrates, conservative women often reject the notion that women are unequal compared with men or explain the disparate outcomes that women face—such as making less money than men, as a result of their own choices and not overt discrimination. 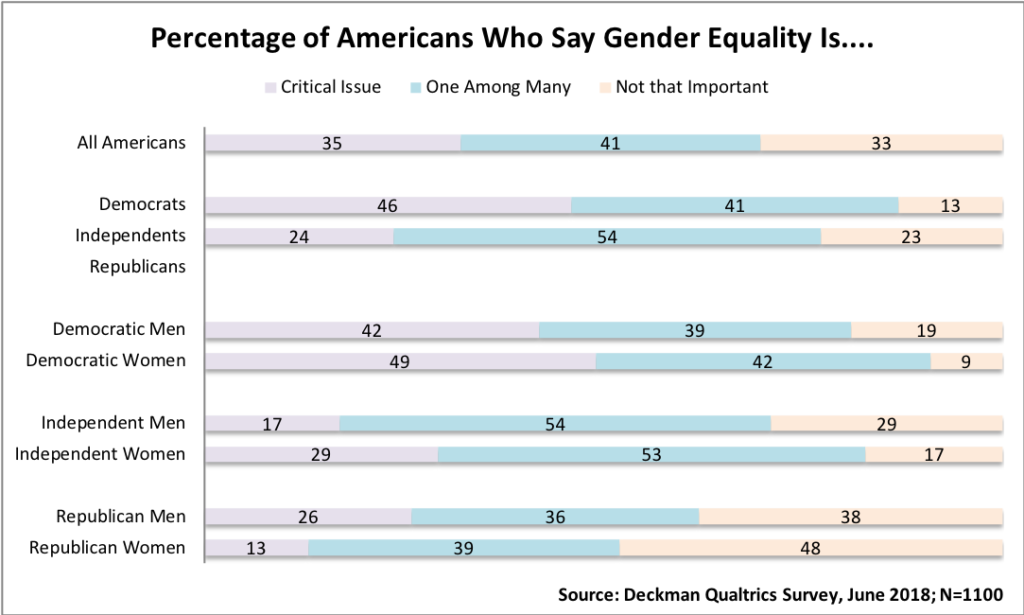 I also asked Americans about their likelihood of voting this fall as well as their likely vote choice. According to my survey, 58 percent of Americans say they intend to vote this November in the midterm elections, with another 18 percent indicating that they “probably” are likely to vote. While we can take such intentions with a grain of salt—midterm election turnouts average about 40 percent—I am interested to see if Americans who personally care about gender equality are more likely to say they intend to vote than those who do not. I find that they do. 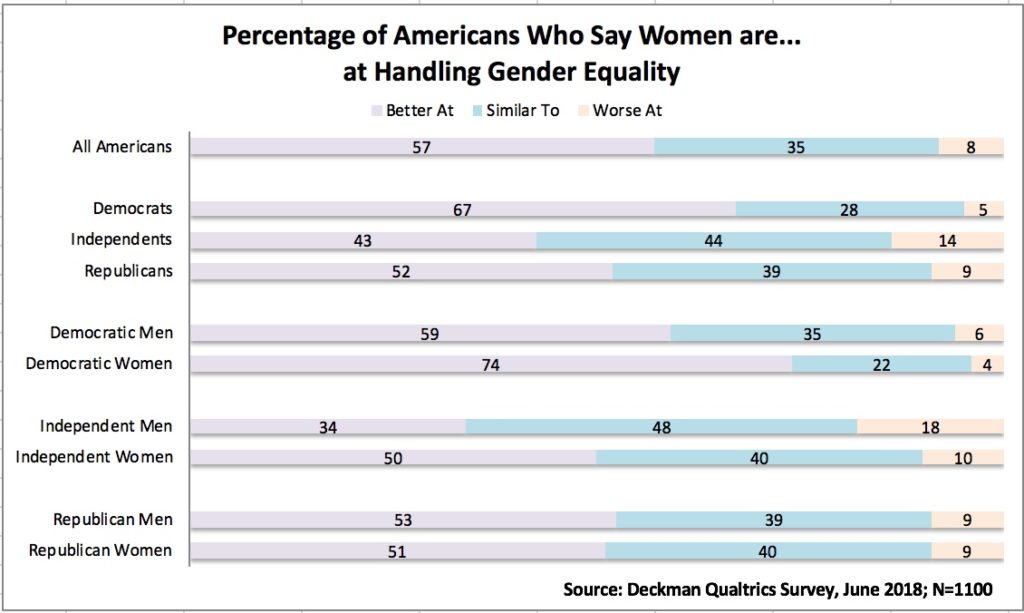 When it comes to campaign issues, women candidates may likely be viewed as having higher levels of moral authority when it comes to representing women’s issues—so it’s not surprising that when women candidates running for office run ads shared their personal stories about overcoming gender discrimination, such as Amy McGrath in Kentucky or MJ Heger in Texas, their ads went viral and their stories were embraced by women voters, especially Democratic women. But even though showing a willingness to run as women, even as mothers, may be proving to be a political asset this election cycle, not all women candidates who have embraced such themes have been successful so far, even in Democratic primaries.

The reality is that there are far more Americans who don’t view gender equality as a critical issue to them personally than there are those who do. In fact, I find that Americans prioritize other issues as being more critical to them personally—such as healthcare (63 percent), immigration (53 percent), gun regulations (50 percent), jobs and unemployment (46 percent) and income inequality (41 percent).

While gender equality may be important to Democratic voters, particularly Millennials, it is likely best viewed as one issue among many. Similar to the #MeToo movement, the issue is resonating with some voters—but whether it can be a galvanizing force in November is likely doubtful.

Melissa Deckman, PhD, is the Louis L. Goldstein Professor of Public Affairs at Washington College and chairs the board of PRRI, the Public Religion Research Institute.