LISTEN: Poet Fatimah Asghar Explores Partition, Immigration and Assimilation in "If They Come For Us" - Ms. Magazine
Skip to content 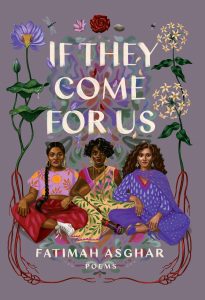 In her debut poetry collection, If They Come For Us, Fatimah Asghar, co-creator of the Emmy-nominated web series “Brown Girls,” writes bluntly and beautifully about being a Pakistani Muslim woman in our contemporary political times.

In a series of poems spanning the intergenerational trauma of Partition—the genocides that led to Pakistan’s ultimate campaign for independence from Britain—and her own struggle to find her place in the U.S., Asghar’s poems in If They Come For Us depict the lasting impacts of state-sanctioned violence and the rhetoric of hate, as well as the stark disconnect between the American dream and the lived reality of American immigrants. With both poignancy and levity, she takes readers with her on a journey toward declaring her own identity and sorting through the suffering her community faces around the world.

In “From,” she contemplates the question that, for women of color, feels as old as time: but where are you from? In “Partition,” she explores the culturally-imposed separations between the women in her family. In “Portrait of My Father, Alive,” she illustrates the lengths her father went to in New York City to feel at home.

In “Old Country,” she remembers the intensity of going to the buffet with her family, where they ate for hours and took leftovers home to make ends meet:

Here we loosened the drawstrings
on our shalwaars & gained ten pounds.
Here we arrived at the beginning of lunch
hour & stayed until dinner approached

until they made us leave. Here we learned
how to be American & say:
we got the money
we’re here to stay.

Asghar created Bosnia’s first Spoken Word Poetry group REFLEKS while on a Fulbright studying theater in post-genocidal countries—which makes it all the more fitting that she would record her own audiobook for If They Come For Us. In an exclusive clip for Ms. readers below, Asghar reads the four aforementioned poems in her own voice.